BRAZIL: Oil Palm Industry Seeks to Atone for Its Sins

TAILÂNDIA, Brazil, Oct 1 2010 (IPS) - “Better ‘dendê’ than cattle,” says Violeta dos Reis, who cooks and serves meals in the small eatery she runs with her husband in the community of Arauaí in Brazil’s northern Amazon jungle. In this rural area, a new world is opening up for poor farmers. 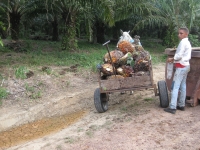 Her reasoning is economic. Dendê, as the African oil palm is known in Brazil, “offers you more of a future,” she says. For that reason her husband, Florisvaldo Reis, purchased for 14,000 reals (8,000 dollars) 10 hectares of oil palm trees in a project for family farmers run by Agropalma, a Brazilian company that produces biodiesel.

But there is also a complex environmental aspect. All along PA-150, the road that runs between the towns of Moju and Tailândia in the northern Amazon jungle state of Pará, oil palm plantations form a monotonous landscape.

The dozens of kilometres of palm trees can come as a surprise to outsiders expecting only lush green rainforest.

But before and after the oil palm plantations, the landscape is not typically “Amazonian” either. Broad grasslands and degraded land make it clear that the palm trees are expanding in an area that has already suffered extensive deforestation. Cattle ranching and the extraction of timber, as well as the production of charcoal, have destroyed vast swathes of rainforest here.

This northeastern part of the state of Pará is the area chosen by Agropalma, the biggest producer of palm oil in Latin America, to plant one of the three types of oil palm, the Elaeis guineensis from Africa, on 39,000 hectares of land since 1982.

But the company then adopted principles of social and environmental responsibility. Besides maintaining 64,000 hectares of forest reserves, it dedicates 10.5 percent of its planted area to the production of certified organic crops, and is engaged in several initiatives to protect biodiversity and curb deforestation.

Agropalma is an active member of the Roundtable on Sustainable Palm Oil (RSPO), an association formed in 2004 by a diverse group of stakeholders — oil palm producers, palm oil processors or traders, consumer goods manufacturers, retailers, banks and investors, and environmental and social NGOs — to promote sustainable agriculture, address the environmental impact of palm oil and certify products as environmentally and socially sustainable.

As vice president of the RSPO, Brito was host of its second Latin American conference, held Aug. 24-27 in Belem, the capital of Pará, where he defended the sustainable expansion of oil palms in the region while avoiding the “mistakes” committed in Indonesia and Malaysia.

These two Asian countries account for 85 percent of global production of palm oil, which recently surpassed soybean oil as the most widely consumed edible oil in the world, and has a wide range of uses in the food, cosmetics and energy industries.

But the growth of the industry in Asia has come at the cost of vast destruction of rainforests and peatlands and the resultant release of huge amounts of greenhouse gases. The RSPO, which has limited Asian participation, is working to fight these problems.

In response to the first RSPO Latin American conference, which took place in 2008 in Colombia, the region’s biggest producer of palm oil, 256 social and environmental NGOs around the world produced the “International Declaration Against the ‘Greenwashing’ of Palm Oil by the Roundtable on Sustainable Palm Oil (RSPO): In Defence of Human Rights, Food Sovereignty, Biodiversity and Climate Justice”.

The declaration condemned monoculture oil palm plantations as a threat to forests, the climate, indigenous and peasant communities, and food security, and described the RSPO as “a tool for the expansion of the palm oil business and not an authentic strategy to contain its environmental and social impacts.”

But some scientists in Brazil argue that in the Amazon jungle, palm trees play a biochemical role similar in some ways to natural forests, while they also curtail erosion and reduce carbon emissions.

The oil palm is “a complex crop, but one that is beneficial to the environment and cheaper than restoring forests on land that has already been degraded,” says Marcos Ximenes, former president of the Federal University of Pará and director of the environmental research institute of the Amazon (IPAM).

In this country, following the criteria set by the RSPO, the ambition to expand palm oil production among small farmers has the support of the government, especially in the form of soft loans from the “programme for sustainable production of oil palm in Brazil”, announced in May by President Luiz Inácio Lula da Silva.

The goal is to double the area under oil palm and get some 12,000 family farmers involved in production over the next four years.

Brazil produces just over 200,000 tons a year of palm oil, 0.5 percent of the global total, and imports a similar amount to meet domestic demand.

State-run oil giant Petrobras launched two projects to produce biodiesel from palm oil, one of which is in Portugal. The plan foresees 2,250 families cultivating oil palm, besides medium and large producers, in the state of Pará, which already accounts for 90 percent of Brazil’s palm oil production.

The Vale mining company, one of the world’s leading exporters of iron ore, also announced that it would produce palm oil-based biodiesel on six plantations in Pará, to reduce transportation costs in its railways and ports by switching from conventional diesel.

The plans to include family farmers are based on Agropalma’s experience.

From 2002 to 2006, 185 families joined the company’s small farmer programme, growing oil palm trees on six to 10 hectares of land distributed by the government.

The beneficiaries are local small farmers who continue to grow their traditional crops, like maize and cassava, since the harvest of oil palm fruit only requires four to six days of work a month.

The Reis family joined the project three years ago, purchasing the contract from one of the original members. Under the contracts, the small-scale oil palm producers agree to sell their harvest to Agropalma for 25 years, the average economic lifespan of the oil palm. (Ownership of the land then reverts to the family, to work as they see fit.)

The Reises also have other plots of land, as well as their food business in Arauaí, which is located in the municipality of Moju.

The programme has changed the lives of the small farmers who are involved, providing them with a steady monthly income. But it also requires long-term planning.

Oil palms need a significant amount of care without producing anything in the first three years, during which the farmer’s debt only grows, with expenses in seedlings, fertiliser and equipment, which begins to be paid off in monthly installments when palm oil fruit finally begins to be harvested.

Some fail to adapt to the system, and go under. “They don’t organise themselves and plan the time they need to dedicate to the oil palms and their other crops, they let the weeds get out of control, and they get discouraged,” says Francisco Damião, field supervisor of the family agriculture programme. Some of the plantations have been virtually abandoned.

But most of the small farmers involved in the programme have seen their incomes climb, despite having to pay off the initial debts incurred.

Benedita Nascimento, who Agropalma cites as a success story, says her monthly income is over 2,000 reals (1,150 dollars) — what she describes as an “inconceivable” amount for a local peasant farmer.

In addition, Agropalma has 4,748 employees working on its own oil palm plantations and in its five palm oil extraction plants and one refinery.

The company does not have a perfect record. Nearly 3,500 workers used to be subcontracted, as a means of evading labour obligations, until the office of the public prosecutor took a hand in the matter in 2007 and an agreement was reached for the employees to be directly hired, Manoel Evangelista da Silva, one of the leaders of the union of rural workers of Tailândia, the city where Agropalma is based, told IPS.

He added, however, that Agropalma “is an excellent company that has brought direct and indirect benefits to local communities,” raising incomes, and ultimately improving working conditions for its employees.