CENTRAL AMERICA: Entrepreneurs, Not Diplomats, Are ‘Ambassadors’ to China

GUATEMALA CITY, Dec 18 2010 (IPS) - With the exception of Costa Rica, Central America does not have diplomatic relations with China, but business executives are taking the place of ambassadors and promoting closer ties with the Asian giant, hoping to cash in on its rapid economic growth. 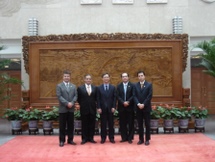 “Bilateral trade with China is growing significantly in all countries of Latin America, to the point that it will soon be the principal trade partner of Brazil, Argentina, Chile, Cuba and others,” Pedro Barnoya, of the China-Guatemala Chamber of Cooperation and Trade, told IPS.

Together, Costa Rica, El Salvador, Guatemala, Honduras and Nicaragua — five of the seven nations of the isthmus — went from 35 million dollars in exports to China in 2002 to 848.3 million in 2009, according to the Secretariat of Central American Economic Integration.

This is in part the result of active efforts by entrepreneurs in the region to strengthen cooperation and trade with China through visits, trade fairs, and other activities.

“Given the absence of formal relations, the Chamber is trying to fill that void so that Guatemalan business can find ways to trade and reach agreements for logistical, technical, scientific and other types of support” that a fast-growing economy like China’s can provide, Barnoya said.

The Chamber has been in operation since 2008, bringing together 130 companies. It organised a fair in Guatemala City dedicated to Chinese products, while China held an event in September at the Expo Shanghai 2010 to create spaces in the local market for Guatemalan products.

Nevertheless, Central America is one of many regions in the world where ongoing diplomatic ties with Taiwan stand in the way of formalising relations with Beijing.

Costa Rica has been the only country of the isthmus to establish full relations with China, breaking its 60-year-old ties with Taiwan in June 2007. That was Beijing’s condition for establishing bilateral diplomatic relations.

But the Costa Rican government’s decision did not trigger the “domino effect” that China had hoped for in Central America.

Taiwan, which Beijing sees as a “rebel province,” seeks recognition from the United Nations, though it has diplomatic relations with just 23 countries around the globe.

Of those, seven are Spanish-speaking: Paraguay and Dominican Republic, and Central America’s El Salvador, Guatemala, Nicaragua, Honduras and Panama. English-speaking neighbour Belize also has relations with Taipei, as do Haiti, Saint Kitts and Nevis, Santa Lucía, and Saint Vincent and the Grenadines in the Caribbean.

“It has always been a challenge for us to gain access to the enormous market of the People’s Republic of China,” César Zamora, of the Guatemalan International Trade Negotiations Business Centre, told IPS.

While Chinese-Central American trade relations remain relatively weak, South America is making quick strides forward. China is already the primary destination of exports from Brazil and Chile, and second from Peru and Argentina.

El Salvadoran Manuel Flores, president of the Central American Federation of Friendship with China, founded in 2007, told IPS that the lack of diplomatic ties “will not be an impediment to achieving fluid trade between China and the region.”

With that perspective, Flores proposed to Chinese business leaders the possibility of creating a trade accord with Beijing as a prior step to signing a full Free Trade Agreement, during the Third China-Mexico Strategic Partners Seminar and the 2nd Friendship Forum of Chinese-Central American Peoples, held in November in Mexico.

The Salvadoran Friendship Association with China, led by Flores, in October created the Chamber of China-El Salvador Trade, and a month later held the first Chinese trade expo in the country, where high technology exhibits were the star attraction.

The Salvadoran entrepreneur believes that diplomatic relations between China and the region “are close to being achieved,” but blamed the lack of knowledge about China and the support for Taiwan as the main obstacles for Central American governments to fully connect to Beijing.

“If you ask anyone what they know about China, they talk about the actor Bruce Lee, but nobody knows anything about its technological and scientific development,” he said, with a note of contempt.

Nicaragua, meanwhile, is trying to formalise a private agreement with China to ease bilateral trade.

“We want to facilitate the means or create paths in which we can improve imports and exports,” with the ultimate goal of formal relations with Beijing, said Martha José Navarrete, of the Nicaraguan Friendship Association with the People’s Republic of China.

Relations between China and Costa Rica are fuelling some envy among the other Central American nations, which want an equal playing field. “Costa Rica is doing really well in beef and seafood” from both its Atlantic and the Pacific coasts, said Navarrete.

In 2009, the trade balance between China and Costa Rica had a surplus for the latter, with exports totalling 767.1 million dollars and imports 711.6 million dollars, according to preliminary data from Costa Rica’s Foreign Trade Ministry.

But all is not roses for the countries that formalise relations with China. Guatemala’s former foreign minister Gabriel Orellana told IPS that Beijing-San José relations have little to show when it comes to measuring benefits for Costa Rica’s economic development.

Furthermore, he said that trade with the Asian giant can have some serious disadvantages, given the overwhelming size of its economy and because its demands focus on raw materials.

The Economic Commission for Latin America and the Caribbean (ECLAC), a UN regional agency, warned in a study of the 2009-2010 period about the type of export model that prevails in exchange with China, in which the Latin American nations supply raw materials with little added value, while purchasing manufactured goods.

“There is a need to forge a trade relationship that stimulates not just growth, but also greater progress with innovation, export diversification and job quality,” states the report.