MADRID, Dec 2 2010 (IPS) - The highest authorities of Spain’s judicial system will have to explain to the Congress of Deputies their repeated refusals to bring U.S. soldiers to trial for the 2003 killing of journalist José Couso in Baghdad. The recent diplomatic cables made public by the whistleblower organisation Wikileaks reveal contacts with U.S. authorities aimed at preventing a trial. 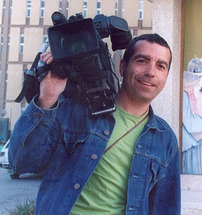 José Couso in a photo taken shortly before his death in Baghdad, Apr. 8, 2003. Credit: Public domain

Deputy Gaspar Llamazares, parliamentary spokesperson of the United Left coalition, told IPS that lawmakers would continue to demand that Attorney General Cándido Conde-Pumpido appear before Congress to explain why the legal proceedings against the three accused soldiers have stalled.

“It can’t be left like this. It is a matter of justice and of responsibility to our citizens, which no government body should ignore, much less Congress,” he said.

The pressure on the Attorney General’s Office, the government and Congress to take action comes from different sectors, including Couso’s family, while the main force of political opposition, the right-wing Popular Party (PP), looks the other way.

The PP’s parliamentary spokesperson, Soraya Sáenz de Santamaría, has argued that the content of the leaked documents about the killing “has not been confirmed” and therefore her party will abstain from taking a position on the matter.

She also suggested that the international community should respond jointly to the 250,000 secret or confidential documents made available online by Wikileaks, and beginning on Nov. 28 were published by five major global newspapers published on their websites — including the Spanish daily El País.

Most of the texts were cables between the U.S. State Department and its embassies around the world.

“The documents could affect important aspects of diplomatic and international relations,” said Sáenz.

PP leader José María Aznar was Spain’s prime minister from 1998 to 2004 and brought the country into the Iraq War, which began in March 2003. He did so despite strong opposition from the majority of the Spanish public and other political parties.

Couso, who was covering the war for the commercial Telecinco TV channel, was killed one month after the U.S.-led invasion.

At a press conference, Couso’s family expressed indignation that both the Attorney General’s Office and the government, “rather than defend national sovereignty and investigate what happened, act in the service of a foreign power and then hide the truth.” The family members said they are planning further legal actions.

Spokespersons for the government of José Luis Rodríguez Zapatero and his Spanish Socialist Workers Party (PSOE), did not respond to IPS’s questions on the matter, and instead referred to recent statements by Foreign Minister Trinidad Jiménez.

On Tuesday, Nov. 30, Jiménez underscored that “in Spain the judiciary is independent and acts with great seriousness… it is unthinkable that it could be pressured in any way to close a judicial proceeding.”

At the Dec. 1 weekly plenary session in which the prime minister reports to Congress, during the breaks Zapatero and Jiménez answered reporters’ questions with only silence and smiles.

But the commotion has not ceased in Spain since El País began publishing — in digital and print editions — the texts that refer to the Couso case included among the secret U.S. documents released by Wikileaks.

According to those documents, the current government supported everything the U.S. embassy in Madrid did to prevent the case against the soldiers from moving forward. Operating a tank, the U.S. soldiers fired shells at the Palestine Hotel in Baghdad, the known residence of foreign journalists covering the war. Couso was on the balcony of the 14th floor filming the action alongside other colleagues.

In one of the documents, sent in May 2007 to then-Secretary of State Condoleezza Rice, the U.S. ambassador in Madrid, Eduardo Aguirre, assured her that the Spanish government had “helped in the wings” so that the judge’s decisions would face appeal and end the investigation into the reporter’s death.

The appeal “will go to the same court which originally dismissed the case (in 2006) on procedural grounds,” wrote Aguirre.

Two years earlier, in October 2005, Judge Santiago Pedraz, of the Audiencia Nacional (a federal court), had issued an international arrest warrant for the three U.S. soldiers who fired at the hotel in Baghdad. The warrant failed, primarily due to Washington’s refusal to recognise it, but also to the passive stance of the Spanish government.

The State Department papers disclosed by Wikileaks, already dubbed “Cablegate,” show that Spanish officials collaborated to prevent international arrest warrants for the U.S. soldiers from being finalised, just as Aguirre had assured his superiors in a cable.

Among those involved, the document mentions Spain’s then-secretary of state for foreign affairs and current presidential secretary-general, Bernardino León, as well as Miguel Ángel Moratinos, who served as Zapatero’s foreign minister from 2004 until October 2010.

In another cable the ambassador sent to the State Department on May 14, 2007, he states, “While we are careful to show our respect for the tragic death of Couso and for the Spanish judicial system, behind the scenes we have fought tooth and nail to make the charges disappear” against the U.S. soldiers who fired on the hotel.

The powerful vice-president, María Teresa Fernández de la Vega, who also served until October 2010, held a meeting around that time with the ambassador. She told him that Attorney General Conde-Pumpido had remarked on the excellent cooperation from the embassy and U.S. authorities in helping to conclude the case.

This “excellent cooperation” was referred to this Tuesday, Nov. 30, by the Attorney General’s Office in a statement which underscores that its actions are based on strictly legal criteria, with no external interference.

But the statement also assures that the office maintains a close and productive relationship with its U.S. counterpart and with similar entities in other countries, primarily in the area of the fight against international terrorism, drug-trafficking and organised crime. But it did not clarify if the Couso case is included in that “area.”

Following several starts and stops in the court case, on Jul. 30, 2010, a Spanish judge ordered the arrest and detention of the three U.S. soldiers implicated, but Interpol did not process the arrest warrants and the United States has refused to accept them because the events involved a “military crime” under its own jurisdiction.