EGYPT: Muslims and Christians Protest as One

CAIRO, Feb 9 2011 (IPS) - Over recent years, Egypt has witnessed mounting tension between its Muslim majority and its sizeable Coptic Christian minority. But in Cairo’s Tahrir Square, the site of ongoing mass protests against the ruling regime, members of both faiths chant in unison: “Muslim, Christian, doesn’t matter; We’re all in this boat together!” 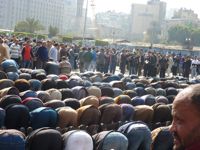 Since Jan. 25, Egyptians countrywide have hit the streets in the hundreds of thousands – even millions – to demand the ouster of President Hosni Mubarak and his 30-year-old regime. The first week of demonstrations was marked by almost daily clashes between police and protesters, in which hundreds were killed and thousands injured.

The demonstrations were initially organized by online activist groups of no particular religious affiliation, such as the 6 April protest movement and the Youth Movement for Freedom and Justice. Nevertheless, some commentators have attempted to paint the uprising as a would-be “Iran-style” Islamic revolution.

In statements that would later be parroted by much of the western media, Israeli Prime Minister Benjamin Netanyahu said on Jan. 31: “Our real fear is of a situation that could develop and which has already developed in several countries including Iran itself – repressive regimes of radical Islam.”

But according to protesters arrayed in Tahrir Square, which on Tuesday was home to hundreds of thousands of protesters, Muslim-Christian unity remains a central feature of the almost daily rallies.

“There’s an overwhelming sense of solidarity here between Muslims and Christians,” 32-year-old Muslim protester Ahmed al-Assy told IPS. “Practically all of the protesters’ rallying cries, and all the sermons led by Muslim sheikhs, stress the importance of national unity.”

Violent clashes between police and protesters that took place nationwide in the first week of the uprising were accompanied by particularly moving displays of interfaith camaraderie. On several occasions, Christian demonstrators shielded their Muslim compatriots – who had paused to pray in the midst of the conflict – from attacks by aggressive police.

“During the fiercest clashes on January 28, I found a guy about my age guarding my back, who I later found out was a Christian,” Yahia Roumi, a 24- year-old protester from Cairo, told IPS. “Now we’re best friends; we never go to the demonstrations without one another.”

The prevailing sense of national unity follows two years of steadily mounting tension between the two communities, exacerbated by occasional flare-ups of violence.

Last November witnessed clashes between Coptic demonstrators and security forces after authorities halted renovation work on a church in Cairo’s Omraniya district. Along with under-representation in the top echelons of government, Egypt’s Copts have long complained of stringent government restrictions on church building.

On January 1, more than 20 Christians were killed when a Coptic church in Alexandria was bombed by unknown perpetrators. While Egyptian officialdom blamed the crime on an alleged “Al-Qaeda” offshoot, the incident served to further aggravate tensions between the nation’s Muslims and Christians.

The largest concentration of Christians in the Middle East, Egypt’s Coptic community is thought to account for some ten percent of the country’s roughly 82 million people. The rest of the population is almost entirely Muslim.

Christian participation in the ongoing wave of protests comes despite statements by Coptic leader Pope Shenouda III, in which he threw his support behind the ruling regime.

“I called the president and told him that ‘all of us are with you’,” Shenouda said on state television on January 30. Five days later, the pope reiterated his support for the embattled president, calling on demonstrators “to end their protests and listen to reason.”

According to one Coptic priest, quoted anonymously by independent daily Al- Shorouk, Shenouda “lost a good deal of legitimacy among his flock by essentially barring Copts from joining the uprising.” But despite the church’s official stance on the matter, the priest added, “we nevertheless encouraged young Copts to participate.”

“I don’t know why Pope Shenouda wants to keep Copts from joining the uprising,” said Boutros, a Copt who has been demonstrating in Tahrir Square since January 30. “Is it merely to pander to Mubarak? Or is it to isolate us from our Muslim compatriots, about whom many Copts have the wrong impression?

“In Tahrir, I’ve met many young Muslim activists – even some from the Muslim Brotherhood,” Boutros, who preferred not to give his last name, told IPS. “They explained how Islam commands Muslims to protect Christians and Christian places of worship. I learned from them that the Muslims don’t have any beliefs that threaten our rights or should frighten us as Copts.”

Unlike Shenouda, some prominent Christian figures have actively supported the two-week-old uprising.

“Demonstrations and sit-ins constitute a legitimate means of expression, according to the law and constitution,” read a February 1 statement signed by several Egyptian Catholic and Anglican clergymen and a handful of Coptic intellectuals. In reference to Shenouda’s stance on the issue, the statement added: “We reject the church leadership’s servile position calling on Copts not to join the uprising.”

The ongoing wave of popular protests, the statement concluded, “has revived the Egyptian spirit despite recent attempts to snuff it out through the promotion of sectarian strife between the Egyptian people.”

Rami Kamel, a member of Egypt’s Coptic Youth Movement, was quoted as saying in independent daily Al-Masry Al-Youm on February 4: “From the beginning, we’ve been participating in the demonstrations to call for the ouster of the ruling regime, which we blame for the country’s economic and social decline.”

The spirit of national unity, meanwhile, has hardly been confined to Tahrir Square.

Following the withdrawal of police from the streets of Cairo on January 28, Abdulla Rageb, a 42-year-old Muslim government employee from Old Cairo, has led an ad-hoc “popular committee” mandated with guarding churches in his neighbourhood.

“I’m protecting these churches as if they were mosques, because, according to Islam, we should respect Christian places of worship,” Rageb told IPS. “As an Egyptian Muslim, I have no reason to hate Christians. We’ve always been neighbours here, and our relations are excellent.”

“On the ‘day of terror’ (January 29, following the withdrawal of police) my mother was terrified,” he told IPS. “So she asked our Muslim neighbour, an old friend of the family, to stay with her and my young sisters until me and my father could come home from work.

“There are no deep-seated problems between Egypt’s Christians and Muslims; we were raised together,” Bishay added. “Even if we might have occasional arguments, these are never religion motivated.”

Many of those now supporting the uprising – of both faiths – say they the blame the regime for most if not all recent sectarian tension.

“The regime is responsible for the sectarian problems suffered by Copts,” Kamel was quoted as saying. “Proof of this is that no church was attacked during the unprecedented absence of security (following the police withdrawal).”

“This corrupt government was behind 90 percent of the problems between Egypt’s Christian and Muslim communities, which had coexisted in harmony for hundreds of years,” agreed Rageb.

Boutros said: “This uprising won’t only bring freedom to Egypt; it will also do much to dispel sectarian tension – of which the ruling regime was the only beneficiary.”