PORTUGAL: Commemoration of Revolution Turns into Protest Against IMF

LISBON, Apr 25 2011 (IPS) - The traditional celebration of the anniversary of the 1974 Carnation Revolution in the Portuguese capital turned into a massive protest against the extreme austerity measures imposed by the European Union and the International Monetary Fund (IMF) as a condition for the imminent financial bailout. 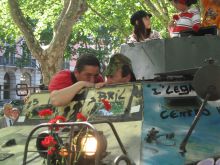 The tank that captured dictator Marcello Caetano in 1974 in the parade in Lisbon. Credit: Mario Queiroz/IPS

An estimated 80,000 demonstrators packed the Avenida da Liberdade in Lisbon Monday, not only to commemorate the 37th anniversary of the popular revolution led by 144 leftwing junior officers – the “Captains of April – that put an end to Portugal’s 1926-1974 dictatorship.

Many of the participants in the parade, held every year on Apr. 25, were also there to raise their voices against the measures of the IMF, the European Commission (the EU executive arm) and the European Central Bank (ECB), which will have a heavy impact on the most vulnerable segments of the already impoverished population of this South European country.

The parade was headed by Colonel Vasco Lourenço, Admiral Manuel Martins Guerreiro and General Amadeu Garcia dos Santos, who were leading members of the Council of the Revolution from 1974 to 1982, when it was abolished.

“We don’t want the IMF”, “The struggle continues” and “April 25 forever, fascism never again” were some of the chants most often repeated by the demonstrators. The more prominent participants in the march included elderly veterans of Portugal’s colonial wars, decked out in their camouflage fatigues, many of whom had replaced the regimental emblem on their hats with a red star.

On Apr. 25, 1974, the junior officers, grouped in the Movimento das Forças Armadas (MFA – Armed Forces Movement), staged the only military coup d’état in history aimed at reinstating democracy by force of arms.

In the space of just a few hours, the MFA – a revolutionary movement led by junior officers tired of the colonial wars raging at the time in Portugal’s “overseas provinces” – managed to remove the heads of the armed forces and topple the “Estado Novo” (New State) dictatorship put in place by Antonio de Oliveira Salazar in a 1926 coup, thus making way for democracy by calling for elections for a constituent assembly.

The elections for the assembly that was to rewrite the constitution were to be held within a year, and the MFA stuck closely to that schedule.

Simultaneously, the Captains of April ordered decolonisation in Africa, where Portugal had had colonies for 560 years.

The first proclamation by the MFA guaranteed that no more soldiers would be deployed to Africa, and declared the movement’s intention to dismantle Portugal’s overseas empire.

At the time, Portugal was almost completely isolated from the world. It only had “normal” relations with a few dictatorial regimes, including Brazil’s, while the United States and the major European powers pretended that the regime was a beneficent dictatorship.

The junior officers, who are now retired colonels, generals and admirals, believe the aims of the MFA’s programme were generally met.

But there is wide popular discontent with the economic situation and social injustice.

The Captains of April are critical of the situation today but not repentant. They still say it was worth it. Portugal is today a parliamentary democracy within the EU.

“But it could have been better, if social injustice had not taken root, protected by the EU,” Colonel Mario Tomé, a leader of the MFA during the revolutionary period, told IPS.

The popular indignation, shared by the former members of the MFA, is in response to the fact that Portugal is the country with the greatest social inequality in the 27-member bloc, as shown by statistics.

The rivers of money that have poured into Portugal since it joined the European Economic Community in 1986 lined the pockets of the already rich.

Managers of public enterprises in Portugal are the highest paid in Europe, while the minimum wage is the lowest in the bloc, critics point out.

A frequently heard complaint is that the cost of the economic crisis that has brought growth to a halt in Portugal in the last two years is being paid by the poor, and the measures recommended by the EU, IMF and ECB are going to make things even more difficult for them.

The austerity measures will include a massive privatisation plan, a more flexible labour market that will make it cheaper and easier to fire workers, significant public spending cuts, a freeze on wages and pensions, and tax hikes.

Other measures are cuts in unemployment benefits and income tax benefits and deductions, an increase in the value-added tax, and the temporary elimination of the holiday bonuses, which are two extra monthly salaries a year.

In his speech at the end of the parade, the leader of the CGTP central union, Manuel Carvalho da Silva, complained about “a worrisome whiff of colonisation in the country” – a reference to the 80 billion euro (116 billion dollar) financial bailout by the IMF-EU-ECB.

Democracy “is wounded,” the trade unionist warned, stating that it is not the IMF, “and much less the EU,” that will solve the country’s financial difficulties, but “the action of the Portuguese people.”

Colonel Lourenço, one of the most prominent officers of the MFA and the president of the April 25 Association, which represents the officers who reinstated democracy nearly four decades ago, said the origins of the current crisis lay in “a profound breakdown in democratic practices.”

The Portuguese people are facing “a truly dramatic situation: the loss of citizen confidence in their leaders, which is much more harmful than the public debt,” he said at the end of Monday’s event.

The early elections scheduled for Jun. 5 will not change the status quo, in which the two main parties – the socialists and the conservative social democrats – take turns in power, which shows that Congress “does not effectively represent the Portuguese,” he added.

He said the Portuguese people “do not give parliament the power” to turn the country over to “the dictatorship of the markets.”

José Carlos, a member of the anti-fascist resistance movement who sat on the organising committee for Monday’s events, said he was hopeful that “the Portuguese people will open their eyes” and fight “the impositions that come from abroad and are squashing the country.

“We won the right to education, work and dignity and we have to keep fighting, despite the troikas, the IMF and everything that has to do with letting those responsible for the crisis off the hook,” said the activist, who spent long years in the dungeons of the dictatorship’s feared secret police, PIDE.

When asked by IPS what was the end result of the democracy movement, Colonel Tomé, who as a major led the “red regiment” of the military police during the revolutionary period, said that “in today’s world, the only hope lies in the social movements that fight for a just globalisation process, for freedom, and for peace.”

Essentially, “the April Revolution certainly had more to do with (the French student and worker protests) of May 1968 than with the storming of the Winter Palace (by the Red Army in 1917 in Russia), which means we can say that despite everything, April 25 is live and well,” he said.