PORTO VELHO, Brazil, May 18 2011 (IPS) - The rage was proportional to the size of the crowd cornered between the jungle and the wall that will dam up the Madeira River in northwest Brazil. Over the space of three days, workers set fire to some 50 buses and other vehicles, work installations and even their own lodgings, which were built to house 16,000 people. 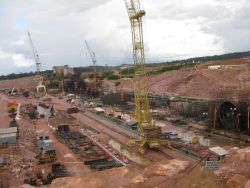 The uprising broke out on Mar. 15, bringing to a halt work on the Jirau dam, one of two large hydroelectric dams under construction in the Amazon jungle state of Rondônia.

The agreement for better working conditions eventually reached by representatives of the trade union and the consortium building the dam did not automatically bring the situation back to normal.

The problem is that because most of the workers are from distant regions, they will only be able to resume work after the employee housing is rebuilt. Moreover, the consortium announced that thousands had been laid off.

But the rioting in Jirau triggered a series of strikes at other mega construction projects, like energy plants, ports, an oil refinery and a petrochemical complex, which employ tens of thousands of construction workers, mainly in the north and northeast, the poorest regions in Brazil.

Some 160,000 workers went on strike in March, according to a study released May 12 by the Inter-Union Department of Statistics and Socioeconomic Research (DIEESE), a research centre that supports trade unions.

The unrest in Jirau was caused by the fact that thousands of workers are “confined there in poor conditions and treated in an authoritarian manner,” said José Dari Krein, director of the Centre for Union Studies and the Economy of Labour at the State University of Campinas.

The dam-building project employed 22,000 people before the conflict.

Similar problems had led to a riot nine months earlier, in Santo Antonio, the other large dam under construction on the Madeira River, 120 km from Jirau. In that protest, 35 buses were destroyed and work stalled for several days. In both Santo Antonio and Jirau, the catalyst was abusive treatment of a worker.

The riots call to mind the May 1984 sugar cane cutters’ strike that shook Guariba, 350 km from São Paulo, where the workers trashed public buildings, looted a supermarket, and set fire to cars and sugar cane fields before the protest was squelched by police.

The sugar cane cutters, most of whom were migrant workers from other parts of Brazil, were lashing out against poor working conditions. The uprising took by surprise trade union leaders and Catholic activists who supported the “boias-frias” (“cold lunch” as the workers are popularly known because they bring their meals with them to the fields in the morning), and frightened government officials and the business community.

“The strike was terrible, but it was also a learning experience for us; it changed the lives of all workers,” recalled Wilson Rodrigues da Silva, who was 18 and had been working as a sugar cane cutter for four years when he took part in the uprising.

There is still a long way to go, but the strike conquered rights, such as collective bargaining, Rodrigues da Silva, who is now president of the Union of Rural Workers of Guariba, told IPS.

The creation of that union and 70 others representing around 300,000 workers in the state of São Paulo was one of the most far-reaching results of the “battle” of Guariba, which spread to nearby municipalities as well.

Since 1975, the Brazilian government has been promoting the replacement of gasoline by ethanol produced from sugar cane, a policy introduced with the aim of reducing oil imports during the 1970s oil crisis, when prices rose fourfold.

The resultant expansion of sugar cane production drew migrant rural workers to sugar cane growing areas like Guariba, where working conditions became even more exploitative and abusive. For example, they lived in substandard housing, and employers often used subterfuge to reduce the payment per ton of harvested sugar cane negotiated with the workers, Rodrigues da Silva pointed out.

The pressure for higher productivity levels made the labour situation explosive in an industry that had become strategic for reducing the country’s energy dependence and improving the balance of payments.

A similar phenomenon is seen today with the large infrastructure and housing projects receiving heavy investment through the Dilma Rousseff administration’s Growth Acceleration Programme (PAC), as a result of which the construction industry grew 11.6 percent in production and 17.6 percent in formal sector jobs last year.

But in construction, as in the sugar cane industry before it, labour relations are precarious, aggravated by weak organising capacity in the unions, which favours “mobilisations marked by a higher degree of violence than in better structured areas,” said Krein.

The situation is aggravated by prejudice against construction work, which is seen as inferior last resort employment, said DIEESE technical adviser Lilian Marques. A similar attitude is held, especially among young people, towards rural work and domestic employment, she added.

The temporary or seasonal nature of much of the work also makes it more difficult for workers to organise, as does the sudden increase in the number of workers in the industry, Marques told IPS.

In Rondônia, for example, the Labour Ministry registered a 54 percent increase in formal sector workers in construction in just one year, to a total of 42,751 in 2010, thanks basically to the hydropower dam projects.

The number had already gone up in 2008, when construction got underway.

The construction workers union (STICCERO) of the state of Rondônia was in crisis in 2009, when the labour justice system sacked its leaders and named temporary officials to organise elections, in which the current union authorities were elected.

The division in the labour movement was blamed for the March uprising in Jirau, which some say was a premeditated act of vandalism. It was led by “hooded” individuals who robbed personal belongings and stole from automated teller machines (ATMs), said some workers who were overheard by IPS.

But the vice president of STICCERO, Altair Donizete de Oliveira, argued that “it wasn’t vandalism committed by a few individuals, but a radical protest by unjustly punished workers.”

The Camargo Correa firm, in charge of construction of the Jirau dam, “is the best company I have worked for,” but in Jirau it put too many workers under “a small team of managers,” he told IPS.

Other problems, he said, were a number of measures that caused tension among workers, especially a decision to cut overtime work.

Construction workers “are different” in that they want to work as much as they can during the period they have been hired for, in order to return home with more savings, said Donizete de Oliveira.

Without overtime and with more free time on their hands, the workers earn less and spend more, which undermines their main reason for moving so far from their homes and families.

But the growth of jobs, which has led to a scarcity of labour power and has curbed migration to other areas in search of employment, “has strengthened the bargaining power” of construction workers, said Dário Carneiro, a leader of the CONTICOM construction workers union.

“There is nothing more just than demanding social benefits, better wages and decent working conditions” to overcome “obsolete practices” in the industry that are reflected by low wages and the highest accidental death rates of any sector of the economy in Brazil, due to disregard for even the most basic safety standards, Carneiro remarked to IPS.