WARSAW, Jun 16 2011 (IPS) - About 5,000 people attended the Equality Parade in Polish capital Warsaw this weekend. Among them, the country’s first transgender rights activists, who in the last couple of years have made great strides in gaining recognition for the country’s transgender community. 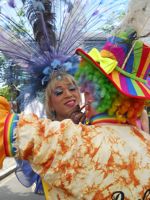 At the Equality Parade in Warsaw. Credit: Claudia Ciobanu/IPS.

Organisers of the Warsaw Equality Parade were keen to stress that the event was not really a gay pride. Rather, it was a march of all those who feel marginalised in Polish society – from sexual minorities to old people and people with disabilities. Moreover, it was not meant to be a celebration necessarily, but more a statement of how diverse this society is.

“This is not a gay pride, because we don’t really have something to celebrate,” explained Szymon Niemiec, one of the main organisers and initiator of the Equality Parade in Poland. “Instead, we are trying to show Polish people the diversity of our society, that yes, there are gays in Poland, there are drag queens and there are queers.”

Putting the emphasis on recognition and acceptance of all marginalised social categories – rather than on pride – may be a more digestible message for a Polish society where over 90 percent of the population is affiliated with a conservative Catholic Church and where mainstream politicians often promote homophobic messages.

Such an approach may have contributed to an increasing openness towards the parade, which has been taking place since 2001, with the exception of 2004-2005, when then Warsaw mayor Lech Kaczynski banned the event (Kaczynski later became president of Poland). Last year, Warsaw hosted Europride, the annual European gay pride.

Attendance in the parade in Warsaw was much larger than in similar events taking place these weeks elsewhere in Central and Eastern Europe: 1,500 in Bratislava (Slovakia), 150 in Split (Croatia), 150 in Bucharest (Romania).

In Warsaw the Equality Parade appeared to engulf the entire city in its infectious good mood. Indeed, the start was shaky: several hundred counter-demonstrators gathered next to the parliament, the starting point of the parade, to intimidate the participants.

Circled from the beginning by numerous anti-riot police troops, counter-demonstrators still managed to throw eggs and petards at the parade participants. But once the march started, no further incidents happened, and participants were greeted along the route by onlookers dancing to the music of the parade, taking pictures and waving.

LGBT (Lesbian, Gay, Bisexual and Transgender) rights advocates welcome the political support, though they are wary that it may be opportunistic. SLD (Democratic Left Alliance) last month introduced a bill proposing recognition of same-sex civil unions, but Szymon Niemiec argues that the timing of the bill (too close to the summer holidays and a few months before general elections in the fall) makes it unlikely that the bill will be even discussed by this legislative.

In any event, governing center-right Civic Platform has already indicated that the bill stands little chance of passing. The governing party has also recently given signs it might support a proposal to ban gay people from foster-parenting (at present, the sexual orientation of single people wanting to adopt is not considered).

Yet, judging by the looks of the parade and the experiences of LGBT activists, Polish society itself is changing and the openness of people could gradually alter politicians’ and the church’s positions.

Szymon Niemiec, whose life has been repeatedly under threat since he came out in the late 1990s, says that he and his partner now feel good living in Warsaw. As everywhere in Eastern Europe, the neighbours’ attitudes are symbolic: “After more than ten years living in the same building, my neighbours are now very open to me and my partner, they invite us to their gatherings and have a good opinion about us,” Niemiec told IPS.

“It is because they see that when I go out to shop, I buy just the same bread, the same cigarettes, and the same toilet paper as them, every time. They see that I am like them, not some hidden monster. In the end, this is what the Equality Parade is about: about killing all those hidden monsters.”

Wiktor Dynarski, one of the participants in the Jun. 11 parade and representative of the Trans-Fuzja foundation for transgender rights, agrees that Polish people, at least in the big cities, are becoming increasingly accepting of difference.

According to Dynarski, who is in charge of Central and Eastern European affairs in pan-European group Transgender Europe, Poland is possibly the most progressive country in the region when it comes to transgender rights. For one, people undergoing gender reassignment are not obliged to undergo sterilisation, as is the case in Czech Republic and Slovakia. Plus, transgender people have access to advice, support groups and dedicated events, which is less possible in some of the other countries: for instance, Hungary has to date no transgender movement and transgender people live their lives completely under the radar.

Additionally, Trans-Fuzja is currently trying to improve the gender change recognition procedure, having gained the support of the Polish Ombudsman and even some politicians from small parties. While better than in other countries in the region, the recognition procedure is still very difficult in Poland, and can take up to five years.

It involves prolonged examinations by psychiatrists and sexologists, a real-life test of living in the desired gender before hormone therapy is allowed, and a half-year court trial during which the approval of the parents is sought. Trans-Fuzja wants to make this an administrative process rather than a judicial one, as well as to replace diagnoses by psychiatrists and sexologists with basic psychological evaluations. The group also wants to see national healthcare coverage for gender reassignment surgery.