TAIWAN: No Indictment Over Wrongful Execution

TAIPEI, Jun 1 2011 (IPS) - Taiwan prosecutors certified that Air Force private Chiang Kuo-ching had been wrongfully executed in August 1997 for the rape-murder of a five-year-old-girl at an air force headquarters compound in Taipei, but failed to indict any of the nine military officers responsible for extracting his “confession” through torture. 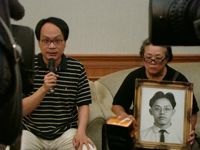 A decade-long campaign by his father, Chiang Chih-an and mother Ms Wang Tsai-lien and human rights lawyers who maintained that Chiang had been tortured into making a false confession finally led to a call by the Control Yuan, Taiwan’s watchdog branch of government, to open the case May last year.

On May 23 this year, the Special Investigation Division of the Supreme Prosecutors Office announced that its re-investigation of the case had shown clearly that Chiang Kuo-ching was innocent of the rape- murder, and filed an indictment for murder against Hsu Jung-chou, 34, who had served in the Air Force Operations Command together with Chiang, and asked for a 20-year sentence.

In a 127-page statement, the prosecutors acknowledged that a re-examination of the forensic evidence, including a blood-stained razor, toilet paper and a palm print, were not connected with Chiang and therefore had been insufficient to prove that Chiang had committed the crime.

Moreover, the prosecutor’s brief acknowledged that Chiang had definitely been subject to compulsion, intimidation and abuse by the interrogating Air Force counter-intelligence officers and that his “confession” which was the primary basis for his conviction by a military tribunal, was “not voluntary” and was extracted by “torture”.

However, citing the passage of a 10-year statute of limitations for the offences of “coercion” and “intimidation and endangerment,”, which carry maximum penalties of less than three years imprisonment, the SID prosecutors did not indict any of the nine former military officers responsible, including two former defence ministers.

Leading the list was Chen Chao-min, a retired air force general who served as defence minister in President Ma Ying-jeou’s right-wing Chinese Nationalist Party (Kuomintang or KMT) administration from May 2008 to September 2009 and had acted as convenor of the investigative team in his role as Air Force Combat Operations Command (AOC) commander at the time of the Chiang case.

The SID brief said Chen had “illegally instructed” the officers to “give it a try” to “break the mental defences” of Chiang and other suspects by “intensifying interrogation methods”.

The SID brief detailed how Ko Chung-ching and other Air Force counter-intelligence agents had handcuffed and blindfolded Chiang and dragged him to an underground bunker at the AOC headquarters and subjected him to four hours of intense interrogation under continuous and high intensity light, compelled him to repeated watch video of the autopsy of the murder victim, forced him to squat and engage in exercises, and used electric cattle prods to beat the enlisted man.

The confession extracted in this process was used as decisive evidence in a subsequent military tribunal despite Chiang’s retraction and declaration that he had been tortured.

Nevertheless, the SID refrained from indicting the officers for “causing death through abuse of the power of prosecution,” an offence which can carry sentences from 10 years to life and which has a 20 year statute of limitation, and stated that the Air Force officers could only be charged with “coercion” and “intimidation and endangerment,” offences which carry maximum sentences of three years or less and have a 10 years statute of limitation for prosecution.

“This result falls far short of President Ma’s declaration in February that the government would clarify the truth, reverse the unjust verdict of the Chiang case and prosecute the persons responsible for this injustice,” said JRF Executive Director Lin Feng-cheng.

Chiang’s mother, Ms Wang Tsui-lien, also said the SID decision not to indict Chen Chao-min or other officers was “unacceptable” and said that she would “never forgive” her son’s torturers.

During an unsuccessful attempt to meet with Chiang’s mother and issue a personal apology on the evening of May 25, the former defence minister told news media that “there had been administrative shortcomings” in the handling of the case.

“This result falls far short of President Ma Ying-jeou’s declaration in February that the government would clarify the truth, reverse the unjust verdict of the Chiang case and prosecute the persons responsible for this injustice,” said Judicial Reform Foundation Executive Director and lawyer Lin Feng- cheng.

Presidential spokesman Fan Chiang Tai-chi stated that Ma believed that the government “will deeply re-examine” the errors made by the military in handling the Chiang Kuo-ching case and “absolutely not have any repetitions.”

National Taiwan University Professor of Law Chen Tzu-lung, a specialist in transitional justice issues, told IPS that the SID finding that Chiang’s confession was the result of torture was potentially “explosive”.

“The decision by the SID not to indict Chen Chao-min and the other officers responsible for Chiang’s torture and execution was political in nature as the prosecutors did not want to take responsibility for opening a Pandora’s Box.”