DHAKA, Jul 7 2011 (IPS) - Amidst despair and poverty, women in some remote villages of Bangladesh are raising money and lending it to each other through a unique microfinance programme launched by a local non-government organisation. 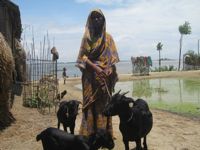 A beneficiary of the microfinance programme. Credit: Naimul Haq/IPS.

Unlike the traditional microfinance arrangements where credit comes from external sources or development partners, the local NGO Pally Bikash Kendra (PBK) has taken a different approach where beneficiaries themselves generate and save money to help small businesses survive.

Called “Self-Help”, the programme was launched four-and-a-half years ago in the wetlands of Mithamoin in Kishoreganj district in central Bangladesh, less than 150 kms from the capital Dhaka. Today, the 317 women’s groups operating in the area have a combined fund of roughly 15 million taka or over 200,000 dollars.

Twenty-eight-year-old Bishan Chkraborti is one of hundreds of beneficiaries who virtually had nothing at the beginning but, after joining the “samity” or group, now runs her own business raising cygnets and selling adult swans at a local market.

Four years ago, her eight-year-old son had to drop out of school, since she could not afford the boat fare to take him to the only primary school in the 200-hectare swampland. “I had no income as my disabled husband could not work. We lived in a tiny one-room bamboo-shed home,” said Chkraborti, who comes from Puran Borgadia village.

Now she has a bigger house with a tin roof, mud floor and bamboo fence. She also grows vegetables and sells them to locals with a slight profit margin. Her son is also back in school.

The Self-Help programme, designed for very poor women, is a simple system based on the discipline of raising and saving money, creating small funds to be loaned out to beneficiaries at negligible interest rates.

Every samity is made up of about 15 women – mostly the landless, widows, beggars and divorced – who deposit 10 taka (13 cents) every month when they meet for discussions to approve fresh loan applications. In those meetings, they also discuss what to do with the loan money, how to use it efficiently, and other social issues that affect women like education and health.

“We don’t have any defaulters,” said a proud and confident Padabi Rani Das. “If a member fails, we all fail. We don’t let anyone fail as we have a system of helping members overcome their difficulties.”

Community organisers like Foyzur Rahman of PBK guide the members on maintaining accounts and depositing money in the local bank, and dispense advice on new business prospects and similar issues.

“We acted as a catalyst promoting their interest to form the samity for their benefit. Of course, initially they did not readily accept our proposals, believing we were another of those money grabbers,” said PBK programme manager Fahmida Jigor Jahan.

“When the women realised that they were getting benefits and saw that gradually poverty was disappearing, they wanted us to find them bigger amounts of loans,” Jahan explained. It was a challenge in the beginning, she said, since the women had never handled big amounts, and figures like 4,000 taka (53 dollars) were already huge to them.

Such loans usually go towards expanding grocery shops, vegetable farming and agricultural businesses like cereal farming. After they pay back their loans, the borrowers become eligible to apply for bigger amounts. This takes them to the next stage of borrowings known as LIFT, which stands for Learning and Innovation Fund to Test new ideas.

Jugomaya Rani Das in Sarkerhati village is one of many who prospered from taking loans from LIFT. She used the loans for vegetable farming and to support her husband’s fishing business.

A mother of two sons, Jugomaya is the leader of a samity who learned how to make money after many years in extreme poverty.

“Life without earning was miserable,” Jugomaya said of her life before joining the group. “We were burdened with borrowing but had no way of repaying the loans. At one stage I thought I would give up family life and turn to begging elsewhere.”

After four years in the samity, Jugomaya now runs a relatively stable business catching fish every other day and selling them in the floating wholesale market, which fetches her family about 480 taka (just over six dollars) every day.

On top of this, she also leases land to plant rice every dry season. Rice farming earns Jugomaya some 35,000 taka (460 dollars) every four months, after meeting all expenses.

About 50 such Self-Help groups who form community-based organisations qualify for bigger amounts of loan money from external sources like the Palli Karma Shahayak Foundation (PKSF) to continue wider microcredit programmes.

Money for LIFT comes from PKSF, a federation of 257 partner organisations offering various sizes of loans to NGO borrowers at nominal interest rates.

Since its inception 20 years ago, PKSF has disbursed over 450 billion taka or over six billion dollars to about 8.6 million borrowers through NGOs like PBK.

PBK has helped nearly 38,000 borrowers – 98 percent of them poor women – since it started working in three districts, disbursing a total of 27 million taka or 3.5 million dollars.

“There was a time when women did not have a voice as they never participated in income generating activities. Today they are empowered and can decide how to develop their own communities,” said PBK executive director Mohammad Hasan Ali.

Since PBK started its microcredit intervention in Mithamoin five years ago, almost all of the 58,000 women have gotten involved in direct or indirect income generating activities.