SRI LANKA: No Cricket for This Tendulkar

VAVUNIYA, Jul 8 2011 (IPS) - His father named him after the famous Indian cricket star Sachin Tendulkar, one of the best sportsmen of his generation. But little Sachin Tendulkar from the northern Sri Lankan town of Vavuniya harbours no ambition of following in the footsteps of his illustrious namesake. 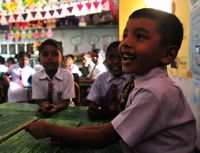 Little Sachin Tendulkar among his classmates at the Vipulananda College in Vavuniya. Credit: Amantha Perera/IPS.

“I want to be a teacher,” six-year-old Tendulkar told IPS, smiling broadly as he sat among four dozen classmates at the Vipulananda School, just outside Vavuniya town about 250 kms north of the capital Colombo. The boy loves his teachers and wants to be one of them someday.

After two-and-a-half decades of bloodshed that tore Sri Lanka apart, children like Tendulkar who dream of becoming teachers, or whatever else they want to be, can now chase those dreams without fear of death.

For years, Vavuniya was the gateway to the main battlefield of Sri Lanka’s long-running civil war. Though the conflict spread throughout the island and urban bombings, attacks and suicide explosions had become commonplace, it was in the region north of Vavuniya – popularly known as the Vanni – where the fighting was at its most intense. Vipulananda College sits on this former boundary of fire.

During the last two years of the war between 2007 and 2009, Vavuniya took on the appearance of a besieged outpost. No one from the south could enter without permission. With bomb-laden vehicles exploding in southern areas, no vehicles from the north were allowed into the south. A large checkpoint was set up in the town of Madawachchiya, about 30 kms south of Vavuniya, to screen all vehicles and travellers. The north was, for all purposes, cut off from the rest of the island.

It is a sign of how much life has changed since the war ended in May 2009 that it is almost impossible to make out the once sprawling checkpoint that straddled the highway. Buildings left over from the war are decaying and covered with a thick coat of brown dust. Weeds have taken over the open areas where vehicles once parked.

Similar changes are visible in the lives of students like Tendulkar. They now come to school regularly, attend classes, and take part in extracurricular activities. The Vipulananda School now looks more like an educational institution than it had at any time in the past decade.

“Students are coming to school regularly. We have hardly had any long breaks in the last year or so,” Subramanium Vivekanandan, the principal for the primary section, told IPS. During the war, there was never any guarantee that students could come to school.

Overnight attacks, search operations or military confrontations would compel nervous parents to keep children home for days. Even during relatively calmer periods, most students and parents were equally reluctant to remain at school beyond closing hours.

Now students have no qualms about staying after hours. Fifth grade students frequently study till six in the evening. “They are preparing for the scholarship exam,” Vivekanandan said.

Such dedication is reaping results. Of the 179 students who sat for the last year-five (fifth grade) scholarship exam – a highly competitive nationwide test students take before moving on to secondary school – 81 secured marks high enough to qualify for scholarships.

Sridaran Vidusha, a 15-year old female student, told IPS she now felt safe enough to study at night. “No large explosions in the night, no loud noises, so I am not scared,” said the girl who dreams of becoming a doctor.

Before militancy took over in the early 1980s, the northern youth had looked to education as the best means to achieve social equality. “There are lots of educated youth in the north; the need now is to provide them with jobs,” said Ponnadurai Balasundarampillai, former vice chancellor of the prestigious Jaffna University, the seat of high education in the north.

But the effects of the long drawn-out conflict continue to linger like dark shadows. On a wall next to the bicycle yard at Vipulananda School, a clumsy repaint job could not hide the graffiti that reads “T for terror.” Teachers relate in hushed tones that these were drawn when the conflict was at its worst.

The graffiti can easily be erased, but not so the other consequences of war, such as acute poverty. Vivekanandan pleads for special help for his students, who come mostly from families that struggle to keep them in school.

Of the 81 students who were successful in their year-five exam, 71 came from poor families and are now entitled to government assistance. “We need to show these students that there is special care if they stay in school,” the primary section principal told IPS. “If we don’t, they will drift away. There is so much pressure to get these kids, especially those who can do manual work, out of school.”

Ironically, since the end of the war, the Vavuniya education zone has been losing trained teachers. During the war, many teachers hailing from within the war zone preferred the relative safety of Vavuniya to the continuous mayhem in their home villages and towns. Now that the war is over, most of them have moved back home.

But parents from the same areas who had enrolled their children in schools in Vavuniya are mostly reluctant to take them back to their village schools. “They know that here, the system and the teachers are better,” Vivekanandan says.

At least for the time being, Vivekanandan can smile. He looks into the classroom full of bright-eyed first grade students as they begin to sing a nursery rhyme. “There is hope, there is always hope. We should not mess this up,” the primary section principal says, mostly to himself.