Fragmented Efforts to Save Honduran Mangroves

TEGUCIGALPA, Aug 23 2011 (IPS) - A mix of local and international initiatives are aimed at saving the mangrove forests and other coastal wetlands of Honduras, home to an abundance of marine life and a natural protective barrier against hurricanes, which have shrunk by over 80 percent on the Caribbean coast and almost a third on the Pacific coast. 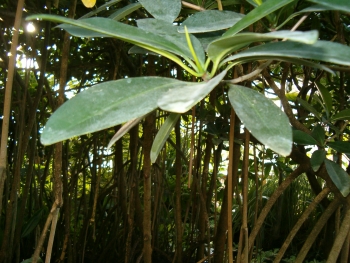 Located in the heart of Central America, Honduras is the most mountainous country and has the largest drainage area in the region, with 21 river basins divided between the watersheds of the Atlantic and Pacific Oceans, according to the most recent National Wetlands Inventory conducted five years ago by the Ministry of Natural Resources and Environment.

The country’s 67 wetlands cover 12,385 square kilometers on the coastal flatlands of the Caribbean coast, interior highlands and valleys, the Pacific coast area of the Gulf of Fonseca, and the Bay Islands in the Caribbean.

In one of these wetland areas, the Río Plátano Biosphere Reserve in the eastern region of La Mosquitia, indigenous communities have been carrying out initiatives to preserve the mangrove forests for the last five years.

These initiatives have obtained financing from the Small Grants Programme (SGP) of the Global Environment Facility (GEF), administered by the World Bank.

The reserve, which spans the departments of Olancho, Colón and Gracias a Dios, was declared a World Heritage site by the United Nations Educational, Scientific and Cultural Organisation (UNESCO) in 1982.

The efforts carried out by local Miskito indigenous communities include programmes for waste recycling, clean-up of the lagoons, recovery of mangrove forests, controlled fishing of endangered species like sea bass, lobster and shark, and ecotourism activities.

The modest funds distributed by the SGP, executed in Honduras by the United Nations Development Programme (UNDP), have financed 14 mangrove protection projects in La Mosquitia and the Gulf of Fonseca.

The SGP has provided these projects with just over 367,000 dollars, while the communities, as the local counterparts, have contributed over 300,000 dollars in volunteer and paid working hours and equipment, along with other efforts that the programme counts as an economic contribution from the beneficiaries, explained its coordinator, Hugo Galeano.

The positive results, said Galeano, are due to “the real and inclusive participation of the communities. When people assume their responsibility for guarding, protecting and benefiting from natural resources, the results are extraordinary,” he told Tierramérica.

The social impacts achieved have also been modest, but are crucial for each individual involved.

Close to 9,624 paid work days have been generated, with direct benefits for 98 families and indirect benefits for another 44, a total of around 1,300 people. The communities selected live in areas of extreme poverty, which is one of the eligibility requirements for SGP funding.

“A lesson we have learned is that the costs of these projects are much lower when people recognise the importance of and take responsibility for the protection of the environment,” said Galeano.

Communities organise into small cooperative associations that do not need to be legally registered to apply for funding. A volunteer “committee of notables” reviews the community proposals, and if they are approved, the SGP provides them with grants of between 3,000 and 30,000 dollars, which the cooperatives administer rigorously.

As for the benefits to the environment, so far over 336 hectares of mangrove forests have been restored. In addition, communities on the Pacific coast began a project three years ago to restore stocks of the threatened olive ridley sea turtle (Lepidochelys olivacea), and have raised and released some 24,000 specimens.

Inspired by these experiences, the Biodiversity Department of the Ministry of Environment established a mangrove protection plan in 2010, with the support of the United Nations Environment Programme (UNEP). The plan forms part of a wider initiative in which Guatemala and Nicaragua are also involved.

After observing the results achieved by the SGP and local organisations, “we are seeking to promote complementary initiatives, carrying out assessments that can lead to greater participation by communities, as well as providing information to local and regional authorities on the importance of preserving these ecosystems,” Rafael Sambulá, the national coordinator of the project, told Tierramérica.

The first phase of the four-year project includes working with indigenous communities in the three participating countries and identifying areas and types of actions to be carried out.

Mangrove forests “are natural nurseries for shrimp, fish, lobsters and micronutrients that make them one of the richest ecosystems in the world, since they provide organic fertilisation of the oceans,” said Sambulá.

The wetlands in La Mosquitia are the most extensive in the country, covering just over 800,000 hectares, and are also home to the greatest wealth of plant and animal life, said biologist David Jaén, who works with the Ministry of Environment’s biodiversity project.

Their isolated and remote location, however, means a limited institutional presence, which poses a challenge to effectively monitoring communal protected areas, controlling the legality of land possession and ownership, and preventing illegal logging.

Because of this, among the many threats, perhaps the most serious is the lack of land management and planning schemes that define the importance of ecosystems, said Jaén.

“The mangroves are the main protective barrier against hurricanes,” he noted, and areas like Omoa, in the north, have been left unprotected by the construction of coastal infrastructure that has destroyed these forests.

Other threats include plantations of oil palms for the production of edible oil and biodiesel, cattle ranching, tourism industry development projects, and the drug trafficking activity which seems omnipresent in the region, even in the heart of the Río Plátano reserve.

Oil palms, which now cover around 100,000 hectares, are being planted in unsuitable areas, including biological reserves, particularly along the Atlantic coast.

“When the wetlands are drained to plant oil palms it causes irreversible damage to the mangrove forests. This is why we recommend the installation of oxidation ponds to reduce the impact of the chemical reactions provoked by the planting of oil palms,” said Sambulá.

Meanwhile, this past February, UNESCO warned of the threat posed by drug trafficking in the Río Plátano and La Mosquitia regions, where drug cartels are challenging the authorities for control over certain areas.

Clandestine landing strips in the middle of the rainforest and illegal logging are endangering biodiversity, UNESCO reported. A number of homicides and the discovery of drug shipments led the government to announce on Aug. 17 that it is considering the establishment of no-fly zone in La Mosquitia.