SAN FELIPE, Mexico, Aug 24 2011 (IPS) - Every night, Adlemi Marrufo goes out to catch bait crabs used to fish for octopus in this small seaside town and others along Mexico’s Yucatan Peninsula, as part of a women’s cooperative that is working to adapt to and fight climate change. 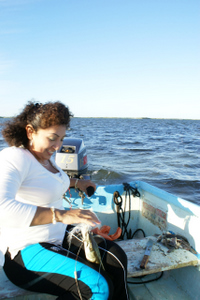 The longnose spider crab (Libinia dubia), known locally as the “maxquil” crab, is fished from August to December in San Felipe, where Marrufo, who everyone calls “Doña More”, has been mayor since 2010.

“We haven’t received support, and I think it would be difficult to get any. Even in our community, we have problems with the men, who wonder how we can do their work,” Marrufo tells IPS as she gets her fishing gear ready on her boat, “Rebeca”.

In 1999, she was one of the founders of the Mujeres Trabajadoras del Mar cooperative, currently made up of 13 fisherwomen.

The women’s cooperative emerged as a collective effort to adapt to climate change, the effects of which are increasingly being felt on the coast of the Gulf of Mexico, which bathes the shores of this fishing village at the top of the Yucatan Peninsula in southeast Mexico, 1,700 km from the capital.

San Felipe, which has a population of 1,850, is one of the 25 coastal towns in Mexico most exposed to the effects of global warming, in the form of stronger hurricanes, heavier and more frequent flooding and increasing changes in the availability of seafood species, which has caused problems for fishing, the town’s main economic activity.

In 2002, Hurricane Isidore devastated 90 percent of the plants along the coast, including the mangroves lining the edges of the huge nearby lagoon.

The women in the cooperative, who were trained in “mangrove ecology” a year after the hurricane, have played a key role in restoring the mangroves, which are vital to keeping water temperatures from climbing too high in the lagoon, an important breeding ground for species ranging from lobsters to the longnose spider crab.

But here, as in the rest of Mexico, women are absent from government programmes to combat climate change.

However, like the fisherwomen of San Felipe, women in communities affected by climate change are slowly starting to organise and get involved in adaptation and mitigation measures.”There is concern because the changes affect productive and conservation activities. The marginalisation that many poor women face heightens the impact, because it undermines their capacity to deal with the effects of climate change,” Teresa Munguía, a representative of Sinergia, a collective of women working on sustainable development and gender issues, told IPS.

Sinergia and the Red de Género y Medio Ambiente (Gender and Environment Network) are working in the area to identify the needs and unfulfilled rights of women, raise awareness on climate change, and help design initiatives and proposals that include women.

Munguía was one of the authors of a report on “contributions from community-based experiences to climate change adaptation strategies in Mexico from a gender perspective”, published in 2010 by the Network, which assesses actions taken in San Felipe and the southeastern state of Veracruz.

Residents from San Felipe and nearby towns at climate change workshop in Yucatan. Credit: Courtesy of Teresa Munguía /Sinergia

“We have been seeing the negative effects of climate change for a long time now, along with problems in terms of gender equality and empowerment of women,” Itzá Castañeda, gender adviser at the United Nations Development Fund (UNDP) Mexico country office, told IPS

Castañeda said women from habitats that are especially vulnerable to global warming, especially rural and coastal areas, “have been adapting since long before it was called climate change, by adapting seeds, to mention one example.”

“Decisions that don’t take women into account cannot be adopted, because women are the most exposed to the impact of climate change,” Greenpeace Mexico spokeswoman Cecilia Navarro told IPS. “They live in the most degraded ecosystems, on land where they face precarious soil conditions and scarcity of water.

“By including a gender angle, we are going to bring about climate justice for the most vulnerable, and help tip the climate balance,” she added.

The gender deficit is visible in the Special Programme on Climate Change drawn up by the Mexican government in 2009, and in the programmes that are gradually being adopted in some of Mexico’s 32 states. Only four of these state programmes have begun to be implemented, and a fifth – in the state of Yucatan – is in the design stage.

But some women refuse to sit back and do nothing. In San Felipe, the members of the cooperative have organised to carry out activities like waste separation and management and environmental clean-up efforts, said the 45-year-old Doña More – who comes from a family of fishers and is married to a fisherman.

The women continue these activities during crabbing season, when they go out in their boats from 9:00 pm to 5:00 am, coming back with 40 to 50 kg of crabs, which they sell for 1.60 dollar per kg, before hurrying home to make breakfast for their children and get them off to school.

Crab fishing season coincides with hurricane season in the Atlantic. When a storm hits San Felipe, local homes are flooded, boats are damaged, and fishers – four percent of whom are women – have to stop fishing.

The study by the Gender and Environment Network says “women are in a position of greater social vulnerability due to the rigid gender roles that persist in local communities and relegate them to a subordinate position in decision-making, and they are aware of this.”

In 2010, the Mexican government, academics and representatives of civil society produced the Mexican Declaration on Gender and Climate Change, which called for policies with a gender focus, adaptation and mitigation efforts, and the necessary funding.

The declaration was presented during the United Nations Climate Change Conference (COP16) held in Cancún, Mexico in late 2010. But little has been done to bring its proposals to bear on government policy.

Four million of Mexico’s 112 million people live in the 25 coastal municipalities most vulnerable to the effects of global warming, according to the 2009 report “La economía del cambio climático en México” (The Economics of Climate Change in Mexico), commissioned by the Mexican government.

The 37,000 households and economic activities worth more than four billion dollars a year in those 25 municipalities are thus at high risk.

Against that backdrop, community-based experiences like the Mujeres Trabajadoras del Mar cooperative make a useful contribution to the design of public policies.

“There are species that used to be fished along shore that I no longer see, and the number of fishers using criticised technologies and methods has increased, while we all have to go further out to sea now,” Marrufo said.

“I’m going to seek funding to continue the reforestation work. I’ve been looking into tourism possibilities; this town has a wealth that is unknown to many,” the mayor added.

She also said the town has limited the capture of longnose spider crabs to local consumption, despite the high demand from neighbouring fishing villages, in order to protect the species and preserve local biodiversity.

The women in the cooperative are calling for the local coastal development programme to include child care centres, training in climate change-related issues, and diversification of economic activities.

“The main problem is the relation between economic activities and poverty,” said Sinergia’s Munguía. “Women are aware of what climate change means and how it modifies the ecosystem, which they want to protect, but there is also the question of survival.”

“In Mexico, this issue is neither studied nor addressed,” said Navarro of Greenpeace. “Women need greater access to public forums of debate at all levels. The measures that are adopted cannot ignore the question of gender or exclude women.”