SRINAGAR , Sep 27 2011 (IPS) - Gazalla Amin’s office on the outskirts of this city, capital of Jammu & Kashmir state, is redolent with the fragrance of lavender wafting up from heaps of the dried flowers in a corner bowl. 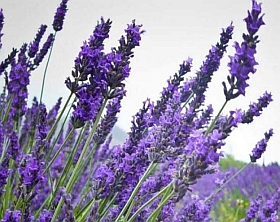 There is nothing fancy or feminine about the fragrance in her office. In her late forties, Amin, a medical doctor by training, has broken into Kashmir’s male-dominated farming sector.

Amin is now leading frustrated farmers out of the conundrum of climatic uncertainties, lost crops, debt and poverty and setting examples in feasible farming alternatives.

In the Baramulla, Bandipora and Pulwama districts of the state, farmers who traditionally cultivate maize barely squeeze about 110 dollars out of each hectare annually.

With rain, temperature, snow and humidity becoming increasingly unpredictable, these smallholders, deep in debt from repeated crop failures, are selling their land to rapacious developers and abandoning their ancestral profession.

“But they need not,” says Amin. She says an answer is lavender shrubs, grown on what is locally called ‘kandi’ (semi-barren, rainfed farmlands).

“Lavender on one hand can yield Indian rupees 200,000 (4,000 dollars) yearly profit, and has a 20-year lifetime demanding minimal input. It is almost pest-free and cattle have no taste for it,” Amin said.

Farmers buy quality saplings, costing about 10 cents each, which Amin – and government and private nurseries – supply.

“More than 90 percent of medicinal and aromatic plants (MAP) used in trade continue to be sourced from the wild and two-thirds of these are harvested by destructive means,” says a federal government document on national mission on medicinal plants.

“The higher reaches of Kashmir’s mountains are a treasure house of valuable medicinal plants and the pastoral Pahari and Gujjar herder communities can easily identify them,” says Amin.

“Traders regularly use the services of these herdsmen for illegal and destructive procurement,” says Amin. “Legal cultivation will help avoid such piracy and preserve natural biodiversity.”

Amin’s foray into medicinal agriculture is a classic case of entrepreneurship. “Even as a medical professional, I was on the lookout for opportunities that would keep me close to nature.”

Eight years back, a write-up on lavender and other medicinal plants took her to the Indian Institute of Integrative Medicine (IIIM), Jammu. Amin ended up taking a batch of lavender saplings back to her ancestral farm in Bandipora district.

“Though not native to Kashmir, lavender just loves this soil and clime,” says Amin. Within a couple of years, the initial half-hectare farm expanded to nine hectares, then into three farms in the districts of Pulwama, Baramulla and Bandipora.

She quit her job and moved around the countryside motivating farmers to switch to low-risk, high-value aromatic and medicinal crops as a strategy for climate change adaptation. She cited her own success, inviting farmers to come over and inspect her farms.

In 2009, she formed the Jammu & Kashmir MAP Growers’ Cooperative with 30 farmers, now grown to 300 members. All receive planting material and training in cultivation of aromatic plants through this collective, aided by the government.

“Best of all, small farmer members are able to market, even export, their products through our cooperative’s one-stop shop and demand fair prices,” says Amin.

Abdul Rahman, 50, from Doodh Pathri village, 42 kilometres from Srinagar, who started lavender cultivation on one hectare of farmland in 2010 has this season extended coverage to 2.5 hectares.

Another farmer Ghulam Ahmed Shah, 60, shifted out of rose cultivation as he found it water-demanding and pest-prone; all his three hectares are now under lavender.

Collective harvests have been steadily rising since 2009. That year, Amin set up a half-a-million dollar, aromatic oil distillation plant with a grant from the federal government. The unit now gets enough flowers to run through the May – December season.

Seeing a potential to rejuvenate the farm sector, a national mission on medicinal plants kick-started in the state in 2009 with a federal allocation of 1.3 million dollars, followed up with an action plan costing 1.5 million dollars in 2010.

The mission is being implemented through self-help groups and farmers’ associations like Amin’s.

Meanwhile, Amin established marketing linkages within the country and in Britain. Essential oils of lavender, rose and geranium under the brand name ‘Pure Aroma’ are now being marketed by her company, Fasiam Agro Farms.

Earlier this year, the state government recognised Gazalla Amin’s contribution to entrepreneurship development in agriculture through a state award for ‘progressive farmers’.

On the difficulties she faced while nurturing her enterprise, she said “there was no precedent for this business model. I quickly learnt through trial and error.”

Amin admits that being a woman agro-entrepreneur in a male domain “felt a bit difficult in the beginning.”

A. S. Shawl, head of the Srinagar branch of IIIM, who pioneered lavender farming in the Srinagar valley some two decades ago, says: “We managed to produce five tonnes of lavender oil (2010), but have a potential to export more than 1,000 tonnes annually.”

Amin, who now produces a fifth of Srinagar’s total lavender oil output, is looking for other pastures for herself and the farmers of Kashmir.

She is looking carefully at the World Health Organisation (WHO) report, ‘The World Medicine Situation 2011’, which says the global market for traditional medicines was worth 83 billion dollars in 2008.

With an annual growth rate of 15 to 25 percent, WHO forecasts that the MAP global market will touch five trillion dollars by 2050.