LISBON, Oct 19 2011 (IPS) - The severe financial and economic problems in Portugal are driving many women to desperation and pushing them into prostitution as a last resort to support their families. 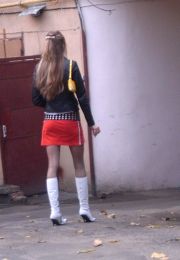 Xana, a typist before the crisis, now works as a prostitute. Credit: Mario Queiroz/IPS

The decision to sell one’s body cannot be taken lightly. But for many mothers the alternative is to condemn their children to hunger, which is why “increasing numbers of women in their thirties, who are victims of the crisis, are resorting to prostitution,” said Inês Fontinha, head of the Associação O Ninho (Nest Association).

Fontinha, who has spent the past 40 years of her life working with prostitutes, said that never before had the situation in the country been so serious. Added to this situation is the fear that is natural in novices to the game, many of whom are divorced, or married and plying their trade behind their husbands’ backs.

She said, “A few days ago, a woman told me: ‘When my apartment doorbell rings, I tremble to think it might be someone I know, and if it is, what on earth would I do?'”

These inexperienced women are also afraid on a daily basis of falling victim to human trafficking networks, often controlled by the so-called “Eastern mafias”, in comparison with which the local pimps seem almost harmless.

In Europe, these rings are generally made up of Kosovars, Albanians, Russians, Ukrainians and Rumanians. In order to beat the competition they use brutal methods like cutting the women with razors, and carrying out sensational murders of their pimps to send a clear message and mark their territory.

Up until 2010, according to Portuguese NGOs, there were 28,000 sex workers in this country of 10.6 million people. Half of them were born in Portugal, and the other half were mainly Brazilians, Rumanians, Bulgarians and Nigerians, who were usually victims of human trafficking rings.

Fontinha said in an interview on the Lisbon radio station TSF and the private television channel SIC that “the constant anxiety because of the crisis is driving more and more women, and also men, into prostitution. For instance in Coimbra, 190 km north of Lisbon and capital of the country’s Centro region, 400 new people are working in prostitution this year.”

Oliveira, a researcher at the Faculty of Psychology and Education Sciences at the University of Oporto, did her doctoral thesis on the world of prostitution in that city, the second largest in the country, 330 km north of Lisbon and the capital of the Norte region.

“Prostitution should be legalised to make it socially acceptable,” she said, adding that it is still “highly stigmatised.”

Oliveira studied prostitution in the streets of Oporto for six years, using the ethnographic method in which the researcher goes into the field and learns about what is going on by questioning, listening and observing the practitioners, to analyse their behaviour from their point of view.

Her findings indicate that most sex workers, especially streetwalkers, come from the lower socioeconomic strata, have little formal education or professional training, and are from poor backgrounds.

The incidence of drug abuse is high: the main goal of 30 percent of prostitutes is to earn money to support their habit. The level of addiction has apparently changed markedly since 2009, when the effects of the global crisis began to be felt in Portugal.

To fight the crisis, drastic cuts have been made in public spending and social subsidies, in a far from promising outlook for the anaemic economy.

The fiscal adjustment plan has included the most swingeing cuts in public expenditure in the last 50 years, with the associated social costs of higher unemployment and climbing poverty, which had been brought down after the fall of the 1926-1974 dictatorship.

What causes a woman to become a sex worker? IPS asked two women who took up the life because of the crisis.

Pamela and Xana (their working names) said they are only in it for the money, but emphasised that, as Pamela said, “It’s not at all an easy job.”

“Lots of people mistakenly say that women who prostitute themselves do it for sexual pleasure, but they have no idea why we do what we do,” said Xana, a 29-year-old divorcée from Lisbon with two children she has to “feed, clothe and educate.”

Pamela and her partner also split up. “From one day to the next he left home, and when a woman is left on her own with two children and the bills mounting up every day, life becomes pretty grim,” said Pamela, who worked in the textile industry up to a year ago.

After several attempts to get a job, “nothing worked out,” she said. The unemployment rate currently stands at 13 percent, according to official figures, and between 17 and 18 percent according to the trade unions. “That’s why I ended up resorting to prostitution,” she said.

Both Xana’s and Pamela’s families are unaware of their activities. Most sex workers lead a double life that their relatives do not know about.

IPS asked if the women knew how families reacted when they found out what their women relatives were doing. “According to some of the women I know, reactions vary,” said Xana, a former office worker in Lisbon.

One woman, Xana said, “confessed to her parents what she was doing, and they became furious and said they would never accept it. But in other cases I know, their families accepted the idea, because they had a vested interest and expected to receive some money.”

As for the sex itself, both women stated that they themselves set the rules, defining very clearly what was acceptable and what they were not prepared to do.

“We always insist on condoms. It doesn’t matter if a client offers more money to have unprotected sex, we won’t agree,” said Pamela.

Can one be happy in such a life? was IPS’ final question.

Xana answered for both of them, with Pamela nodding agreement. “When you are constantly judged and condemned, naturally you don’t feel very good…If our line of work was regarded in the same way as any other profession, I think we would feel better about what we do.”