HAVANA, Nov 14 2011 (IPS) - The creation of co-operatives forms part of the current “updating” of the Cuban economy, even though no official information has been provided about the expansion of this form of business management, which has already been tested, with mixed results, in agriculture. 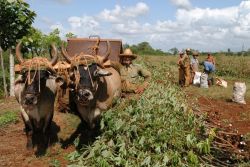 Due to a lack of autonomy, cooperatives in Cuba have been less successful than individual farmers who hire local labour. Credit: Baldrich - IPS

This is not a new issue in academic circles. “Years ago, I conducted a study and proposed, as my personal opinion, to create co-operatives for the collection, transport and distribution of farm products,” economist Blanca Rosa Pampín, an expert on agricultural issues, said in a recent interview with IPS. In her view, this type of self-management could solve the problem of the buying, selling and distribution of agricultural foodstuffs, which until now has been based on a state system that slows down the whole process, discourages producers, causes losses due to transport delays, and drives up the cost of products.

“The guidelines do not talk about this,” Pampín added, referring to the document approved in April during the Sixth Congress of the governing Communist Party, which sets the agenda for the Raúl Castro government’s modernisation of the country’s economic and social policies.

The document, however, does announce that “first-degree” co-operatives – where members are individuals or legal entities – will be created as a socialist form of collective ownership in different sectors, with the goal of producing and providing useful services for society, with members using their income to pay for all costs.

It also provides for “second-degree” co-operatives, whose members are “first-degree” co-ops, with the goal of organising complementary activities that are related to or add value to the products and services of member co-ops (involved in production, services or distribution), and making joint sales and purchases for greater efficiency.

Legal regulations reportedly now being drawn up are expected to guarantee that co-operatives, as a form of social property, cannot be sold, nor can their ownership be transferred to other co-operatives, non-state businesses or individuals. At the same time, the regulations will serve as the basis for determining the income of workers and the distribution of profits.

For some analysts, the delay in the materialisation of these initiatives may be due to the fact that they are changes that the government does not wish to rush, to avoid subsequent errors or delays. “We are not going to rush things to meet a timetable,” Castro said, referring to the pace of reforms during a government meeting in September.

For now, the authorities seem to be focusing on the expansion of self-employment or private enterprise as an alternative for the tens of thousands of people who have lost their jobs in a slashing of the bloated public payroll. This includes the distribution of idle state land to new farmers, under a 2008 law.

But experts say more measures are needed to make the economy grow.

In an article published by the Catholic magazine Palabra Nueva, Camila Piñeiro, a researcher with the Centre for the Study of the Cuban Economy, said additional advantages would be provided by legal regulations for the expansion of co-operatives not limited to agriculture.

“It would allow like-minded people to come together to carry out activities like those engaged in by self-employed workers, but with higher levels of productivity and without having to recur to a concentration of wealth or exploitative work relations,” Piñeiro said.

In her opinion, in this country, progress will be made in the construction of a new economic and social order to the extent that “the number of genuine co-operatives increases and state and private enterprises democratise their management,” along with other conditions.

“The way that co-operatives are organised internally not only makes them compatible with democratic socialism, but also essential, although of course they are not sufficient, nor are they the best way to organise all economic activities,” she said.

In Cuba, Credit and Services Co-operatives (CCS) were formed in the 1960s by land-owning private farmers who voluntarily joined to receive loans, technology and marketing benefits.

A decade later, the Agricultural Production Co-operatives (CPA) emerged, made up of farmers who went from being private to collective owners by selling their land and means of production to the new business entity.

According to economist and agricultural expert Armando Nova, the positive performance of the CPAs over more than two decades served as a model for the creation of the Basic Units of Co-operative Production (UBPC) in 1993.

Over the course of time, however, the UBPCs became “a transfigured form of state enterprise, with unsatisfactory results,” Nova commented in an article on the issue. In any case, the farmland cultivated by co-operatives grew from 15 percent in 1989 to 70 percent in 1999.

According to the information provided by the researcher, the CCSs and private farmers show better results on average than the CPAs, and by 2009 they accounted for 57 percent of total food production with 24.4 percent of arable land.

In Piñeiro’s opinion, if co-operatives have been less successful than private farmers who hire labour, it is due in great measure to the fact that they have not had the autonomy needed to make purchases and decide on their production and sales, among other hurdles.

The co-operatives became “distorted by the statist view of socialism that has predominated,” and the fact that many do not see how the group interests of co-ops can be brought into line with broader social interests without the direct intervention of the State, she said.