LIBYA: Headed for Some Sort of Sharia

TRIPOLI, Nov 16 2011 (IPS) - The announced introduction of Islamic law in post-Gaddafi Libya has drawn strong opposition from women, the non-religious and the Amazigh minority. 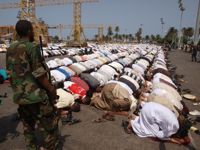 “Sharia means to live in full harmony with the law of God, and that is the most natural thing for a Muslim,” explains Ibrahim Mashdoub, the imam at the al-Garamaldi mosque in Tripoli’s old town.

But he hesitates when questions become more specific: “Should women cover their hair? Will they be able to drive? Will thieves have their hands cut?…”

“That’s actually the main problem when discussing the Sharia, everybody has an opinion but no one really knows what they’re talking about,” complains 23-year-old Wail Mohammed at a trendy coffee shop 50 metres from al-Garamaldi mosque.

“What kind of Sharia will we choose? Pakistan’s? That of Indonesia? Maybe Iran’s?” asks Mohammed, a translator into English, now unemployed.

But leaders such as sheikh Omar Mukhtar, the top military authority in the former Gaddafist stronghold Bani Walid, have made their choice.

“All Libyans want a Sharia like the one in Qatar or UAE. That will give us the cohesion that the country needs after the war,” the military and tribal chief tells IPS, echoing National Transitional Council (NTC) leaders’ speeches in the last weeks.

It’s doubtless true that Qatar’s Sharia – where women are allowed to drive and alcohol is tolerated to a certain limit – seems the most popular among Libyans. But many oppose a future Libyan constitution rooted in the Quran.

“The NTC is almost criminalising those of us who are not religious,” says Abdullah Zlitani, a prominent lawyer, at his office in Gargaresh neighbourhood in the southwest of the Libyan capital. “They are trying to convince people that a non-Islamic constitution will forbid religious practice and boost prostitution – it’s outrageous.”

It’s not just Libyan atheists or agnostics like Zlitani who advocate a separation between state and religion. Fathi Buzakhar is a Muslim who leads the Amazigh Congress of Libya, an organisation set up to defend the rights of the largest minority in Libya – about 10 percent of the population of six million.

“Separation between politics and religion is essential to build a democratic state, but the new Libyan interim government seems to have completely forgotten about that,” says Buzakhar from his residence in Tripoli. The constitution draft released in August fails to recognise his people or their language, he says. The minority were subject to brutal assimilation policies by Gaddafi.

“Not only are we not Arabs, we’ve historically professed a very moderate branch of Islam, Ibadism. Our priests were almost all executed by Gaddafi as Ibadism posed yet another symbol of our identity,” says Buzakhar.

Libyan women seem to fear most the undefined but almost inevitable sharia. Many ask whether they will have to “share” their husbands following controversial statements by NTC president Mustafa Abduljalil on legalisation of polygamy.

“Abduljalil is constantly repeating that Libya will adopt the sharia rule – he did that last in front of the high representative for foreign and security policy of the EU, Catherine Ashton, on Nov. 12 – but this is a decision that should be taken by Libyan people in a democratic way,” says Asma Hassan, a civil rights activist from Tripoli.

There are as many versions of Sharia as there are biased interpretations of the Quran, she says. “What the holy book literally says is that you can marry two, three or even four women, but it then adds that ‘it would not be fair’. It seems that most here have decided not to take into consideration the second line.”

“God, Muammar and Libya” was a favourite official slogan during the more than 40 years Gaddafi remained in power. Libya was already a conservative Islamic state where Islam was practised rigorously through the Gaddafi years. It was not coincidence that Gaddafi called his must-read volume the Green Book.

The Oct. 23 election in neighbouring Tunisia can be a thermometer as well as a catalyst for the Libyan election scheduled for June 2012. With 40 percent of the vote, the moderate Islamist Ennahda coalition won a landslide victory in Tunisia in the first election after the ‘Arab spring’.

“For the time being, moderate Islam is probably Libya’s only chance to cope with the increasing chaos in the country,” Santiago Alba Rico, writer and political analyst based in Tunisia for the last 12 years tells IPS. “Despite its faults, an Islamic democracy in Libya would still be much more progressive than Gaddafi’s dictatorship, as well as the most realistic approach towards the constant clashes between militias.”