Mexico Hides Cadmium Under the Rug

MEXICO CITY, Nov 3 2011 (IPS) - Despite the threat cadmium poses to health and the environment, Mexico has no plan to reduce the use of the heavy metal in the production of toys and industrial products like batteries and fertiliser. 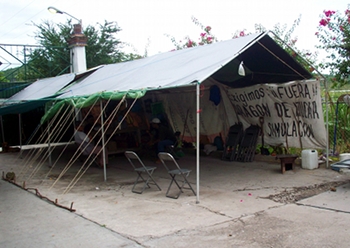 Fertilisers produced by plants like this factory in Izúcar, which protesters blocked after a chemical explosion in 2010, often contain cadmium. Credit: Emilio Godoy/IPS

This Latin American country produces some 1,600 tons a year of cadmium and exports fertiliser, chemicals, plastics and anti-rust paints that contain the heavy metal. It is also a major importer of nickel-cadmium electric accumulators and cadmium waste and scrap.

“The million dollar question is why aren’t certain measures applied, such as reducing the content of these materials in products,” said Rosario Norzagaray, director of the Mexican Network for Environmental Management of Waste (REMEXMAR), based in the northwest state of Baja California.

“The institutions have to act,” she told IPS. “The government only reacts to howls of outrage from the community.”

The network of 10 organisations, founded in 2000, has been carrying out a “programme for the development of capacities for the adequate management of electronic waste” since 2009. So far, it has provided training to 15 educational institutions in Baja California and collected 17 tons of electronic waste, including old computers, cell-phones and batteries.

The general population absorbs cadmium into the body through the food chain – from crops contaminated by polluted water – and through smoking tobacco contaminated by fertilisers that contain the heavy metal.

Exposure to excess cadmium can cause kidney damage, hypertension, heart disease and anaemia, and increases the risk of prostate, lung and kidney cancer.

In its study “Analysis of the flow of trade and review of environmentally sound management practices for products containing mercury, lead and cadmium in Latin America and the Caribbean”, published in March, the United Nations Environment Programme (UNEP) studied the possible effects on human health and the environment of products containing these three heavy metals.

It also called for global actions in relation to lead and cadmium.

UNEP noted that the import of new and used products containing lead and cadmium is a pending challenge for developing countries and economies in transition that lack the capacity to manage and dispose of the substances in products in an environmentally sound manner.

“The question is seeing where the waste ends up, in order to put a stop to the cycle,” said Norzagaray, who lives in a state where more than 200 manufacturing plants operate.

“The general population lacks awareness about hazardous waste. People have not been given accurate and reliable information in a way that captures their attention. Levels of participation by society are low…we want to create a sense of community,” she said.

Activists will share experiences and showcase success stories at the Second National Meeting of Citizen Organisations Involved in Waste Management, to be held Nov. 7-9 in the western Mexican city of Guadalajara, under the slogan “Waste is everyone’s responsibility”.

Between 2001 and 2009, Mexico exported some 880,000 tons of products containing cadmium and imported 1.2 million tons, according to the UNEP report.

The World Health Organisation (WHO) and the U.S. and Mexican governments set a maximum acceptable concentration of 0.005 mg per litre for cadmium in drinking water.

The cadmium found in the shellfish exceeded the acceptable limits for consumption, and is seen as a risk to human health, says the study by Fabiola Lango and María Castañeda at the public Technological Institute of Boca del Río, and Cesáreo Landeros-Sánchez at the Graduate College in Agricultural Science.

The study, which was published in the August 2010 edition of the Revista Internacional de Contaminación Ambiental (International Journal of Environmental Pollution), says the possible causes of this high concentration include the dumping of untreated waste containing organic materials, pesticides, fertilisers, detergent and metals, as well as the high level of agricultural activity around the Tamiahua lagoon.

Canada, Mexico and the United States established the North American Clean Electronics Pollution Prevention Partnership (CEP3) in 2006 to encourage North American manufacturers and importers of electrical and electronic equipment to voluntarily adopt pollution prevention measures such as the reduction and elimination of toxic materials like lead, cadmium and mercury.

But this objective has not been met.

Between 150,000 and 180,000 tons of electronic waste are generated every year in Mexico, according to the “Diagnóstico sobre la generación de basura electrónica en México” (diagnosis on e-waste generation in Mexico), the only study on the question in this country, which was published in 2007 by the National Polytechnic Institute.

Waste disposal in Mexico is covered by a 2004 law on prevention and integral management of waste.

The 2007 study says the sorting, dismantling and pre-processing of e-waste are important, but only as intermediate stages, and that the recovery and recycling of materials is crucial for the generation of value and control of toxic substances.

The report recommends keeping detailed inventories, drafting plans for the handling of e-waste by associations of producers and importers of electronic products, as well as regulations and criteria for the plans, drafting a national law on the recycling of e-waste, and establishing public-private partnerships for the collection and dismantling of e-waste.

The U.S. Consumer Product Safety Commission will start to draft a rule to restrict cadmium in children’s products, especially toy jewellery, unless the American Society for Testing and Materials (ASTM International) publishes a voluntary standard by Dec. 16. Mexico may follow suit.

The CPSC made its decision in response to a petition filed by four consumer groups complaining that children’s jewellery contains cadmium in “greater than trace amounts”.

Cadmium has been used to inexpensively add weight and give shape to jewellery, since the use of lead was banned in 2008.