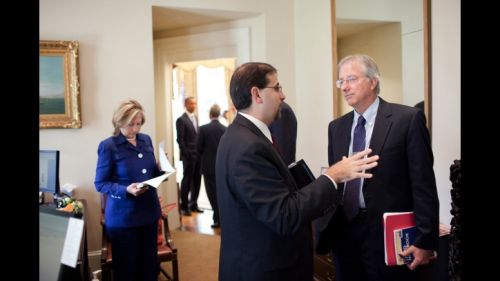 He will rejoin the Washington Institute for Near East Policy (WINEP), an Israel-centred think tank that was spun off in 1985 from the powerful lobby group, the American Israel Public Affairs Committee (AIPAC). Ross served as WINEP’s counselor and a fellow during the George W. Bush administration from 2001 to 2009.

“An institution that believes sound policy lies at the intersection of scholarship with statesmanship is especially proud that Dennis is returning to his intellectual home,” said WINEP’s executive director Dr. Robert Satloff.

Despite the generally hawkish views of WINEP’s fellows and their frequent criticism of Obama’s approach to the Middle East, Ross said in a statement that his departure from the White House was due to family reasons. It offered no hint of major policy differences between him and Obama or his colleagues on the National Security Council.

“Obviously, there is still work to do but I promised my wife I would return to government for only two years and we both agreed it is time to act on my promise,” added Ross.

“I am grateful to President Obama for having given me the opportunity once again to work on a wide array of Middle Eastern issues and challenges and to support his efforts to promote peace in the region,” he said.

But coming as it does as Republicans in the 2012 presidential primary race and in Congress have been hammering away at what they have characterised as Obama’s “hostility” toward Israel and its prime minister, Binyamin Netanyahu, Ross’s departure could give them more ammunition.

Because of Ross’s unusually close ties to leaders in the Jewish community and the Israel lobby, his presence in the White House has acted as a shield against those attacks.

“…(W)ith the diplomacy frozen, Ross’s departure is not a diplomatic problem for the White House; it is instead a problem for the Obama re-election campaign,” wrote Elliott Abrams, Ross’s counterpart in the George W. Bush White House, who, as a neo-conservative Republican, has been relentlessly critical of Obama’s Mideast policies.

“For Ross was the only official in whom most American Jewish leaders had confidence. As most of them are Democrats who have long accepted Ross’s faith in the ‘peace process,’ they viewed his role as the assurance that a steady, experienced, pro-Israel hand was on or near the tiller,” Abrams, now with the Council on Foreign Relations, wrote on his cfr.org blog early Friday morning.

A former Soviet specialist who served in top Middle East positions under former presidents George H.W. Bush and Bill Clinton, Ross was initially brought into the Obama administration as the State Department’s special advisor for the Gulf and Southwest Asia, a post he held from February to June 2009.

He then moved over to the White House where he has served as special assistant to the president and senior director for the “Central Region” at the National Security Council, making him the civilian counterpart of the chief of the Pentagon’s Central Command (CentCom), covering a region stretching from Egypt to Afghanistan.

While adept at keeping a low profile, Ross has focused in particular on U.S. policy toward Iran, about which he has long-held hawkish views, and on Israel-Arab relations, especially the U.S.-led Israel- Palestinian “peace process” which appears to have reached a dead end under his supervision.

Indeed, Palestinian leaders, who have often referred to Ross as “Israel’s lawyer”, have refused to meet with him formally since shortly after the resignation of Obama’s first special envoy for the Middle East, Sen. George Mitchell, last May.

Indeed, one senior U.S. diplomat, Amb. Daniel Kurtzer, who took part in the Clinton-era negotiations, cited a number of anonymous officials who were critical of Ross’s mediation in the 1990s in his book co-authored with Scott Lasensky, entitled “Negotiating Arab- Israeli Peace”.

“The perception was always that Dennis started from the Israeli bottom line, that he listened to what Israel wanted and then tried to sell it to the Arabs,” one Arab negotiator told them. “…He was never looked at …as a trusted world figure or as an honest broker.”

Similarly, Abraham Foxman, the long-time head of the strongly pro- Israel Anti-Defamation League, once referred to Ross as “the closest thing you’ll find to a melitz yosher, as far as Israel is concerned”. Melitz yosher is the ancient Hebrew word for “advocate”.

Mitchell, who was replaced by a career State Department official, David Hale, reportedly left out of frustration over Obama’s failure to take a harder line toward Netanyahu’s rejection of U.S. appeals to resume a partial moratorium on Israeli settlement activity and take other measures that would bolster Palestinian Authority (PA) President Mahmoud Abbas and induce him to return to direct negotiations. Mitchell considered Ross his main antagonist in internal policy debates, according to a number of sources.

Ross also strongly and successfully opposed suggestions by Mitchell and others that the U.S. put forward its own proposals on a final settlement of the conflict.

While Ross has long been critical of Israeli settlement expansion, he reportedly argued, as he did under Clinton, that exerting serious pressure on Israeli leaders would prove counterproductive.

According to various reports, he was privately critical of Obama’s demand in 2009 that Israel halt all settlement activity in the Occupied Territories and East Jerusalem as a precondition for re- launching negotiations with the Palestinians.

Despite those differences, Ross’s early endorsement of Obama as president – as well as his role during the 2008 campaign as a liaison to AIPAC and other Israel Lobby groups – earned him entrée into the incoming administration’s top foreign policy ranks.

Ross stance on Iran was also considerably more hawkish than Obama’s public position of “engagement” with the Islamic Republic, at least during the campaign and at the outset of the administration.

In the run-up to the 2008 elections, Ross participated in two task forces on Iran policy, including one by the Bipartisan Policy Center, which called for military strikes against Tehran if it did not agree to abandon its uranium enrichment programme. Other task force members included prominent neo-conservatives who championed the 2003 invasion of Iraq.

Ross was also a founding member in 2008 of United Against Iran (UANI), another hawkish group that has mounted an aggressive public campaign to highlight the alleged threat posed by Iran to Israel and the U.S.

And, in a book co-written by WINEP fellow David Makovsky and published just after the 2008 election, Ross called for using diplomatic engagement primarily as a means to rally international support behind “tougher policies – either militarily or meaningful containment” – an approach that has been largely adopted by the administration.

Indeed, the fact that Ross has largely prevailed in setting the basic policy parametres on both the “peace process” and on Iran, at least for through next year’s election, makes it unlikely that Obama will make any major policy changes in the interim.

“The administration does not need Dennis Ross anymore,” said M.J. Rosenberg, a Mideast expert at Media Matters, who used to work for AIPAC and the more dovish Israel Policy Forum. “It’s on automatic pilot, enhanced by direct demands from AIPAC and Netanyahu that will invariably get a positive response. Ross was a middle man and a middle man is no longer necessary.”

“Dennis Ross is returning to the outpost of the Israel Lobby whence he came, leaving a diplomatic shambles behind him,” according to Amb. Chas Freeman (ret.), former head of the Middle East Policy Council here.

“None of the issues in his charge prospered during his tenure, which saw the collapse of any pretence of a peace process between Israel and the Arabs, a deepening of the Iranian conviction that a nuclear deterrent is necessary to deter Israeli or American attack, and the collapse of American prestige and influence among the Arabs and in the Islamic world more generally,” he wrote in an email exchange with IPS.