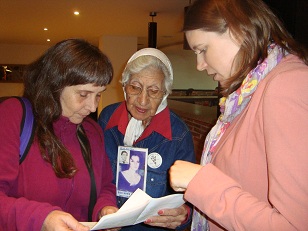 BOGOTA, Dec 2 2011 (IPS) - The human rights situation in Colombia is extremely serious, and getting worse, reported an International Verification Mission made up of 40 delegates from 15 countries who visited the country this week.

“I have visited Colombia six times since 2006, and I continue to be shocked because the situation isn’t improving,” Denis L’Anglais, with Lawyers Without Borders Canada, told IPS.

There were 32 murders and 174 assaults on human rights defenders in 2009, according to the Information System on Attacks on Human Rights Defenders in Colombia (SIADDHH). But the number increased to 54 murders and 255 assaults between July 2010 and May 2011, the non-governmental group reported.

“Someday someone will have to answer for the crimes against humanity committed in Colombia,” said L’Anglais, who took part in the two International Caravans of Jurists made up of lawyers from around the world, in 2008 and 2010, and participated in an International Federation for Human Rights (FIDH) mission. He is also a member of the Programa Somos Defensores (We Are Defenders Programme).

“Genocide is being committed in Colombia,” Mirta Acuña de Baravalle, one of the founding members of Argentina’s renowned Mothers and Grandmothers of Plaza de Mayo human rights groups, told IPS. In her role as activist, she has been invited to this country on numerous occasions.

The International Verification Mission culminated the International Campaign for the Right to Defend Human Rights in Colombia, launched in 2009 with support from 292 organisations across the globe.

The Campaign initially emerged in response to the threats posed to human rights defenders and others by the illegal wiretapping carried out for years by the president’s intelligence agency, DAS, against journalists, opposition politicians, activists, and even Supreme Court judges.

The scandal over the wiretapping operations led to legal charges against former DAS directors María del Pilar Hurtado – now in exile in Panama – and Jorge Noguera, who was sentenced in September to 25 years in prison for ties with the far-right paramilitary groups. According to the verdict, he provided the paramilitaries with lists of names of academics, trade unionists and others, who were subsequently murdered.

Bernardo Moreno, who was the secretary of former president Álvaro Uribe (2002-2010), is also in custody, while Uribe himself is under investigation by the Accusations Commission in the lower house of Congress, which has the authority to investigate current and former heads of state.

DAS was shut down in November but the investigation continues.

Another ongoing investigation is of 2,500 cases of “false positives” – the euphemism used to describe army killings of young civilians passed off as guerrilla casualties.

Under the so-called “body count” system, the military offered incentives like weekend passes, cash bonuses, promotions and trips abroad to get “results” in the counterinsurgency war.

The victims were mainly young men from poor neighbourhoods who were lured in by false job offers, taken away, and forced to put on camouflage fatigues like the ones worn by the insurgents, before they were shot by the security forces and tallied up as combat casualties.

When he took office in August 2010, President Juan Manuel Santos, Uribe’s former defence minister, called for peace and reconciliation, citing the protection of human rights as “an essential and profoundly democratic, ethical and human commitment.”

Santos has also made clear statements of respect for the judicial system, which Uribe had often questioned. In addition, he re-established relations with neighbouring countries, with whom his predecessor had quarrelled, and accelerated the approval of the Victims and Land Restitution Law, aimed at restoring millions of hectares of land seized from peasants in the war, mainly by the paramilitaries.

However, murders and forced disappearances of environmentalists and people fighting for the return of their land have increased.

The global rights group reported that 233 mining concessions have been granted to a total of 267,623 hectares of land in 117 indigenous reserves.

The 2010-2014 national development plan states that unprecedented levels of security were achieved in Colombia thanks to Uribe’s policies.

But the International Campaign for the Right to Defend Human Rights in Colombia says the focus was on recovering control of territory by military means, without any attempt to prevent human rights abuses or to provide assistance to victims.

“We cannot blame the Santos administration for what is happening…but as president, he must do much more to change things,” L’Anglais said

The International Verification Mission observers met Thursday Dec. 1 with representatives of the government.

But “political will is also necessary, as well as recognition of what is happening by government officials,” he added, alluding to a certain scepticism they observed on the part of Interior Minister Germán Vargas.

The Mission toured the country in eight groups from Monday Nov. 28 to Friday Dec. 2.

In January 2012, the observers will officially give the Colombian government their recommendations, compiled after “an effort that was sad but also gratifying, because the victims maintain their dignity and are doing everything they can to find solutions,” said Baravalle.