U.S.: A Credit Union to Bail Out People, Not Big Banks

SAN FRANCISCO, California, Jan 21 2012 (IPS) - Occupy activists from Wall Street to San Francisco’s financial district have dramatised their anger with big financial institutions by blocking JP Morgan Chase Bank doorways, dancing atop Wells Fargo counters, pitching a tent in a Bank of America lobby, hanging banners across Citibank windows, and accompanying the actions with the now-familiar chant “Banks got bailed out, we got sold out.” 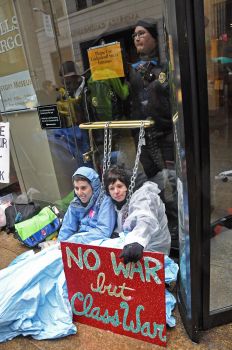 Protesters chained themselves to the door of the Wells Fargo Bank in San Francisco's financial district. Credit: Judith Scherr/IPS

The Occupy Movement condemns the banks’ role in predatory lending and the foreclosure crisis, the high-interest student loans they say enriches the bankers and impoverishes college students, bank investments in private prisons and more.

But protesting isn’t enough for Occupy San Francisco activist Brian McKeown. He says a bank should be a transparent institution whose mission is to help people. And so, with like-minded partners, McKeown is putting together a plan for the People’s Reserve Credit Union (PRCU). Occupy San Francisco is encouraging the venture.

In the next few weeks, McKeown says he’ll be ready to submit the PRCU’s application for a charter to the California Department of Financial Institutions.

“The country’s been devastated economically because of greed and government malfeasance,” McKeown said in a recent interview at the downtown San Francisco Public Library. “I don’t think it’s hard for folks who are educated to understand that the banks have ripped us off.”

The PRCU will be patterned on the Grameen Bank in Bangladesh, where McKeown spent three months studying microfinance. Its interest rates will be low and loans will go mostly to people who couldn’t otherwise qualify for loans at banks or even at most credit unions. However, they won’t be targeted to people who cannot pay them back.

Borrowers will be required to attend classes in business and personal finance and will have mentors to help their businesses succeed and to enhance their ability to pay back the loan. The PRCU will work with San Francisco State’s Community Service Learning Project to provide the education component, McKeown said.

San Francisco entrepreneur Tim Mayer, who is advising McKeown, said the bank will offer the same services other banks do. “But there will be a different consciousness,” he said. The PRCU board “will not focus on shareholder profits,” he said, but will be “concerned with the welfare of those they are servicing.”

Standing in the rain, in front of a Bank of America in San Francisco's financial district – one of the half- dozen or so banks shut down Jan. 20 by protesters from Occupy Wall Street West and some 55 allied organisations – Amanda Starbuck of Rainforest Action Network spoke through a bullhorn, telling the crowd gathered around her, "In places like Appalachia they have blown up mountains and poisoned people's drinking water, because it's easier for banks to make a profit on those investments than it is to make a responsible decision."

Elsewhere in San Francisco's financial district, crowds of protesters that included clowns and jugglers and stilt walkers shut down streets and intersections. They turned one bank into a food bank and served lunch to all; they used song and dance at one Wells Fargo Bank to denounce profiteering from student debt, and, at a different Wells Fargo, used street theatre to show the link between Wells Fargo investments and private detention centres for undocumented immigrants.

Many of the protests targeted the 12,000 foreclosures in San Francisco between 2008 and 2011. Bank of America foreclosed on the home of Josephine Tolbert, a 75- year-old African American cancer survivor.

"Bank of America sold my house while they were working with me for a loan modification," she told a crowd. "They said, 'as long as you are in review, you cannot be foreclosed on.' They lied."

The day of protests included demonstrations at the federal courts against the Citizens United decision that treats corporations like people and protests at the U.S. Immigration and Customs Enforcement office against the deportations that break up immigrant families.

They also demonstrated support for hotel workers fighting for better conditions and for health care for all. There were reportedly 18 arrests.


While microloans in developing countries can be as low as 100 dollars, McKeown is planning to offer loans of around 1,000 dollars. That amount may seem small in a place like San Francisco, he said, but it’s enough to fund materials to make jewelry, buy a used server for someone creating computer apps, or to rent equipment, which an allied non-profit organisation would purchase. Funding student loans may come later, as the bank grows, he said.

To apply for the charter, McKeown needs to have his board of directors in place – he said he does, but is not yet ready to reveal their names. (Selection of the board will be preliminary and subject to an eventual election by PRCU members.)

McKeown needs to present a business plan and show that he has adequate capitalisation to get chartered. He said they already have some wealthy backers and a fundraising concert is in the works.

The road ahead for the new credit union will not necessarily be easy, cautioned Rafael Morales, public affairs and west coast programme officer at the National Federation of Community Development Credit Unions.

“There’s generally a high rate of failure for most start ups,” said Morales, who has had preliminary meetings with McKeown. He said usually the NFCDCU recommends that a credit union begin with operating capital of one to two million dollars to carry it through several years.

“The first couple of years are unprofitable,” Morales said. “The more working capital, the higher chance of success.”

Others say it can be done for less. Warren Langley, former president and CEO of the Pacific Exchange in San Francisco – and a supporter of the Occupy Movement – told IPS he thought a credit union could be established with 100,000 to 200,000 dollars.

McKeown said he plans to capitalise the bank at 250,000 to 500,000 dollars for the first year, keeping expenses at a minimum with bank officials working at low or deferred salaries and some without compensation. Mayer acknowledged, however, that it will be a challenge to find a CEO for the PRCU that has the requisite experience, shares the PRCU philosophy and will work for low wages.

The Occupy Movement is a “big tent” that includes libertarians, Democrats and communists. McKeown may part ways ideologically with those among his fellow Occupiers who reject capitalism.

The problem, as he sees it, “is in the way capitalism is run. When my business fails, it doesn’t get protected. No one comes and bails me out. Why are we bailing out the businesses – financial institutions – – that are supposed to be the most conservative in the world?” He said if the system were working, the big banks would have failed.

“When we had that 800-billion-dollar bank bailout….they took the money and allowed the mortgages to fail,” he said. “Now all of a sudden Wall Street is making profits again, like it was before. It’s a jobless recovery. People have a right to be pissed off. Access to capital and credit made this country great.” He intends to make that access possible through the PRCU.

Of course, one new small credit union won’t make big changes in a system that’s not working. Langley, the former Pacific Stock Exchange CEO, noted, however, that the PRCU could solve the problem for its members.

“And if everybody, then does more of those [credit unions], it would certainly help,” he said. “It provides people alternatives.”