RIO DE JANEIRO, Feb 1 2012 (IPS) - The government of the state of Rio de Janeiro is unveiling a battery of creative tactics to engage the population in the battle against dengue fever, which is threatening to reach unprecedented epidemic proportions as a new virus strain hits Brazil. 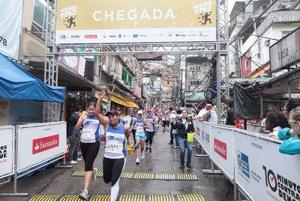 Racing for Peace in the Rocinha favela, one of the many creative activities organised under the campaign against dengue fever. Credit: Rio de Janeiro Health Secretariat

School is out for the austral summer and the options in Rio’s Complexo do Alemão favela (shantytown) are either “hanging out in the street” or gearing up to combat dengue, says Miguel Terto, a 14-year- old aspiring firefighter.

“It gives us something different to do, but it also encourages us to save lives,” the teenager told IPS. Terto lives in one of the 20 favelas of the city of Rio de Janeiro – the capital of the state – that underwent a pacification process last year.

Terto is training to be a “junior firefighter” along with some other 200 kids and teenagers “recruited” to combat dengue in his neighbourhood.

Besides getting to wear a uniform – which is part of the appeal for these youngsters – the trainees are taught the basics of dengue prevention.

A total of 2,711 cases of this disease, which is transmitted by the Aedes aegypti mosquito, were registered in the first month of the year, according to official data released today.

“Kids see firefighters as heroes who save lives, which is why they identify with our profession so much,” said Mauro Domingues, head of community actions in the Rio de Janeiro Fire Department, which participates in disease prevention efforts.

“Which is why we think they can become efficient health multipliers,” he told IPS, in reference to the “junior firefighter” initiative that prepares kids to teach their families, neighbours and friends to recognise dengue symptoms and identify mosquito breeding sources.

Although it is an almost invisible enemy, it can be wiped out if everyone gives just 10 minutes of their time a week to implement simple measures, Rio de Janeiro Health Secretary Sérgio Côrtes told IPS.

The “Ten Minutes Against Dengue” Campaign was launched by health authorities as an alert tool for the summer, when alternating rains and heat spells create the ideal climate conditions for Aedes aegypti larvae to breed.

The goal of the campaign is to eliminate any possible breeding sites inside homes, where experts say 80 percent of these sources are concentrated.

“We have to teach people that dengue is no laughing matter, that we need to combat it because it kills,” Juliana Sorrilha, another young aspiring firefighter, told IPS.

Sorrilha was selected among 9,000 kids who signed up for the initiative in the pacified favelas.

Dengue spreads through the bite of an infected mosquito that first caught the virus by biting an infected person. The virus has an incubation period of four to 10 days. Early symptoms are high fever, joint and muscle aches, weakness, shortness of breath, strong headaches and eye socket pain, a young firefighter trainer explained.

“My kids are on vacation, they are not doing anything, so I decided to sign them up for the (junior) firefighter classes,” Georgeti Pinheiro told IPS.

Four of Pinheiro’s relatives, all children, had to be hospitalised in 2011 with dengue.

The mosquito thrives in any exposed stagnant water collected in large containers, tins, jars, discarded tyres, abandoned pools, puddles, saucers placed under potted plants, and many other places where rainwater collects around homes.

“My neighbour caught dengue because there was a lot of still water in his house, and he didn’t know that that’s where mosquitoes lay their eggs,” Terto said.

This year, health authorities in Rio de Janeiro fear that a dengue epidemic will break out in the state and that it will reach unprecedented proportions.

Alberto Chebabo, director of communicable diseases at the Clementino Fraga Filho University Hospital, told IPS that the hospital has admitted a large number of dengue patients.

The infectious disease specialist also said he was concerned with the re-emergence of the DEN-1 virus, which had not been seen in Rio since the 1990s.

Even more alarming, he said, is the appearance of the DENV-4 strain in the country, which has already been detected in the state.

“The combination of a vulnerable population and a high rate of infection of this vector increases the risk of severe epidemics for the coming years,” Chebabo warned.

“Because the dengue-4 virus has not spread significantly in Brazil before, the entire population is at risk of being infected by this virus, because nobody has developed antibodies against it,” he said.

For this reason, “in cities with a high risk of infection by the Aedes aegypti mosquito, unless proper vector control measures are taken, the virus will spread more easily and a large number of people could be infected within a short period of time,” he said.

The government has taken this very seriously and is attacking the issue on different fronts, including raising awareness through cultural and sports activities.

It has even organised a mixed martial arts (MMA) event, bringing on board Brazilian and international champions of MMA, which is a very popular spectator sport in Brazil, with a fast growing fan base.

In one corner of the ring, big names from the international MMA scene, like former U.S. heavyweight champion Ricco Rodríguez, prepare to fight. In the other, two actors dressed up as giant mosquitoes entertain the public with silent-movie-style antics.

“Puny rival? No, my rivals are always big, but the mosquito is the most dangerous of all,” Peruvian featherweight champion Yerry Tolentino Jaime says, laughing.

“It really is a heavyweight. I’ve had dengue three times already. But I’ve been lucky. Some of my neighbours died,” João Gomes told IPS.

Gomes, a masseur, was one of thousands of spectators who turned out to watch the MMA fight, held in the municipality of Duque de Caxias, in Rio’s metropolitan area.

A few steps from the ring, 700 health practitioners showed the public larvae and adult mosquitoes, in an effort to teach them to identify the rival they are up against.

“I learned a lot. To knock out the mosquito we have to make sure we don’t leave any tyres, bottles or tins with water,” said Everaldo Alberto, a vendor who arrived early to secure a spot.

The price of the ticket was a used tyre, one of the leading villains responsible for spreading dengue.

“Give us back our tyres!” someone shouted jokingly from the audience, disappointed when one of the Brazilian champions was knocked out.

“One of the best ways to communicate with people is through sports. We’ve gathered people of all ages here, but especially young people. Our aim is to attract this public more and more, so that they can bring what they learn from the campaign back to their homes. We will only defeat this threat if everyone pitches in to wipe out the mosquito’s breeding grounds,” Côrtes said.

“We can’t let it dodge any punches, we have to block our opponent and not let it get close,” is how Brazilian middleweight Gerson Conceição translates the campaign’s message into boxing terms.

The Ministry of Health reports that awareness-raising campaigns such as this were instrumental last year in bringing down dengue cases by 24 percent in Brazil, as compared to 2010. A drop of almost 40 percent was registered among the most severe cases, those with the highest mortality.

In late January, the campaign continued outside the ring, with the two giant mosquitoes participating in a “race for peace” and “against dengue” in La Rocinha.

This favela, Rio de Janeiro’s largest, was seized by the police in late 2011, as part of the government’s plans to clear Rio’s shantytowns of drug gangs, and has remained heavily patrolled since then, but has also allowed for a number of these initiatives to be implemented.

The race ends with the insects coming in last, worn out after running five kilometres up the narrow streets that zigzag the hillside La Rocinha is built on.