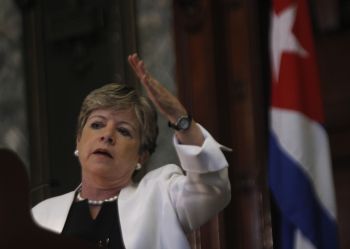 The region is also highly indebted – in particular the English- speaking islands – and faces great difficulties recovering from the effects of the economic meltdown in the United States and Europe, from which it receives much of its income in sectors such as tourism and services, according to this official of the United Nation’s Economic Commission for Latin America and the Caribbean (ECLAC).

Bárcena, a Mexican biologist, arrived in Cuba on Feb. 6 on a three- day visit to meet with local authorities and exchange views on several issues, including the progress of the Community of Latin American and Caribbean Nations (CELAC), a new 33-nation continental bloc created in December 2011, which she sees as “an enormous opportunity” for regional integration.

“We have a very dynamic relationship and we work close together” with the National Statistics and Data Bureau to obtain economic and social measurements, Bárcena said. “We are very interested in the (population and housing) census” Cuba plans to conduct in the second half of this year, she added.

In response to a question from IPS at a press conference held during her visit, Bárcena said that small Caribbean islands are vulnerable to natural disasters caused by events such as hurricanes and floods.

“It is no doubt one of the regions most vulnerable to climate change” and especially to rising sea level, she said.

However, she noted that the impact varies within the region, with some areas more affected than others, and that this needs to be assessed.

“We are in the process of identifying (these differences) and focusing on preventing measures, to prepare for the impact. It is important for the region to be prepared,” she added.

In her opinion, Cuba has “a great lead” in this area, “with a very advanced and sophisticated weather system, which can even be shared with the rest of the region.”

Frequently hit by hurricanes, this Caribbean island nation has a comprehensive prevention plan to protect both human lives and material goods in the event of natural disasters.

Havana recently defined a programme for adapting to climate change that covers prior hazard, vulnerability and risk studies, including the assessment of possible impacts from the rise in sea level, and the adoption of any necessary sectoral measures.

Reports by the United Nations Environment Programme (UNEP) project that three percent of Cuba’s mangrove forests may be lost with a one- metre rise in sea level, and that a 50 cm rise in sea level could lead to serious inundation in more than 60 percent of beaches in some areas of Grenada. They also foresee an increase in the incidence of waterborne or vector-borne diseases.

By 2050, Cuba – which in 2008 suffered an estimated 10 billion dollars in losses as a result of three hurricanes – could lose 2.32 percent of its territory to rising sea levels. Adaptation measures in at least 79 seaside settlements are thus necessary to minimise the impact of this phenomenon.

A 2009 ECLAC study found that Latin America and the Caribbean is one of the regions in the world worst hit by climate change. This is due to several factors, namely that it is located below the hurricane belt and has numerous island nations and low coastal areas, it depends on the Andean snowmelt for urban and agricultural water supply, and it is exposed to floods and forest fires.

That 2009 report, entitled “Climate Change and Development in Latin America and the Caribbean,” urged governments to shift their focus to climate change adaptation, as “most measures” thus far had been “spontaneous or reactive in nature” and “focused on the handling of natural disasters and the subsequent recovery efforts.”

In this sense, the ECLAC report considered that an adaptation approach “implies absorbing the losses expected in the primary sector and in public revenue and anticipating the expenditures that the public sector will have to make to tackle the negative and potentially concurrent direct consequences of climate change, such as droughts, floods, epidemics, heatwaves and infrastructure damage.”

On a regional level, Bárcena said that the United Nations agency she heads supports the creation of CELAC as a space for cooperation, and not just for discussion.

“We’re firmly behind the CELAC system… We want it to be a successful process,” she said, noting that Chile currently occupies the interim presidency of the body, and will be succeeded by Cuba, a member along with Venezuela and Chile of the troika that heads this new American bloc, of which only the United States and Canada are not members.

Both in the conference she delivered at the University of Havana on Feb. 6, and her statements to the Cuban and foreign press, the executive director of ECLAC spoke of the process led by Raúl Castro in Cuba, which faces many challenges, including preserving the “Revolution’s achievements” in the areas of health, education and social equality.

“I’m very excited with what is being done here (…) there’s a dynamic of moving forward very great determination,” she said in reference to the country’s efforts to update the economic model through measures and reforms set out in a programme adopted in April 2011 by the governing Cuban Communist Party.

Bárcena said that these “social and economic policy guidelines of the party and the revolution,” as the programme is known, are “just what is needed” to update “without any ruptures” the equality and equity agenda that Cuba mapped out for itself many years ago.

“There is a determination to give socioeconomic density to the country’s national project,” she said.