Once a Food Chain, Now a Corporate Supply Chain – Part 2

WASHINGTON, Feb 2 2012 (IPS) - While Indian retailers are losing sleep over the possible entrance of multinationals like Walmart into the dense South Asian consumer market, very little thought has been given to the Indian small farmer, who stands to lose even more at the hands of the world’s biggest commercial food retailer. 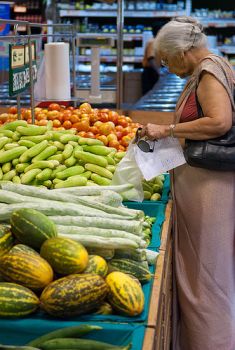 A woman inspects the fresh produce at a supermarket in Mumbai. Credit: Eurofruit/CC By 2.0

The commercial food market topped seven trillion dollars at the end of 2009, overtaking even the mammoth energy sector, according to a new report by the ETC prepared ahead of the June 2012 Rio+20 conference on sustainable development.

The top 10 retail food firms raked in combined annual sales worth 753 billion dollars, 25 percent of which went to the world’s largest corporation: Walmart.

In 2009, 51 percent of Walmart’s total revenue came directly from its food sales, making it the U.S.’s largest grocer.

However, with consumer markets in the U.S. and Western Europe shriveling fast, Walmart has been forced to look elsewhere for customers.

The ETC report predicts that Brazil, Russia, India and China (BRIC) will claim four of the top five grocery markets by 2015; in fact, the grocery markets of the BRIC countries will be worth a combined three billion dollars in the next four years.

India, free of the ideological constraints that make trade with communist China or the former Soviet Union a rather complicated task, often shines as the most lucrative option for retailers like Walmart.

The only thing now standing between Walmart’s grocery tsunami and millions of small farmers in India is a consumer base that is loyal to small traders and highly sceptical of a firm that critics say has wreaked havoc on the U.S. economy and food system.

Small farmers in the U.S.

Over the last two decades Walmart has ballooned into the most dominant force in the U.S. food market, more powerful even than the old titans like Monsanto and Kraft.

Severe food price inflation in India over the last decade has stoked the belief that the problem lies in inefficient food distribution and can only be rectified by building corporate supply chains to reduce waste, providing better cold storage, eliminating intermediaries and lowering costs for consumers – all things Walmart promises to do in the blink of an eye.

Countless experts and farmers have voiced strong opposition to this view, including Jayati Ghosh, a leading economist at the Jawaharlal Nehru University in New Delhi who believes the argument is "ridiculous" on various fronts.

"Food inflation was relatively low in our country until 2006 despite high GDP growth. How come our traditional supply chains in food did not create such massive food price spikes earlier?" she asked in an interview with Down to Earth magazine.

Further, she stipulates that the Indian government need not rely on retailers like Walmart to provide equipment and facilities, citing the National Farmers' Commission report, which advocates promoting farmers' cooperatives as a means of streamlining cold storage.

"This entire argument completely ignores the critical role that can be played by a public distribution system in moderating food price spikes and dampening inflationary expectations and tendencies of hoarding," she added.

"Instead of accepting the government's failure to use this system effectively, (people) throw up hands and declare that only the large private sector can save us, even though international evidence indicates that corporate monopoly in food trade typically increases distribution margins rather than reducing them," Ghosh stressed.


During this time, Walmart has scaffolded its growth with finely tuned public messaging, positing itself as a supplier of “healthy” food, a force behind a growing movement to “eat local” and a panacea for poverty and “food deserts”.

But numerous studies have found that, far from resolving the crises identified by its marketing image, Walmart has been very much a part of the problem.

“Walmart is part of a larger system, controlled by a handful of companies, that have helped drive prices paid to farmers down, while encouraging farmers to grow primarily commodity crops,” Ben Lilliston, vice president for programmes at the Institute for Agriculture and Trade Policy, told IPS.

“Walmart is not the only factor here. U.S. policy, which encourages the over-production of commodity crops, has (also) been a major cause. When you combine government policy with the market power of a few corporations that include Walmart, it is very hard for smaller family farmers to survive,” he added.

Walmart is not only the biggest seller but also the biggest buyer of food, making it, at times, a virtual monopsony – a market in which only one buyer faces many sellers.

“This gives Walmart an enormous amount of power as they can force food processors, even large ones, to drop their prices and pay for expenses that used to be borne by the retailer,” Patty Lovera, assistant director of Food & Water Watch (FWW), told IPS.

“When the processors get paid less, they force farmers who supply them to take less. The company also deals in incredible volume so they only want to deal with the biggest suppliers – they do not want to deal with small, local or regional suppliers of food, they want national scale contracts. This means that many food processors cannot get into the Walmart system,” she added.

Wenonah Hauter, executive director of FWW, perhaps put it most succinctly when she noted that corporate influence in the food system has “created a food chain that’s shaped like an hourglass”, with a small number of food retailers standing between 300 million consumers and a little over two million farmers.

This has not only created a problem in access but also contributed to the epidemic of malnutrition seeping from the fields of industrialised farms down to the tables of thousands of low-income households.

“We can safely say that corporate control of the food system in the U.S. has not been good for public health – whether it is over- nutrition and rising obesity, or undernutrition and the rising rates of food stamp use,” Lilliston stressed.

“There is a whole host of work being done on food deserts that maps out communities around the country that Walmart and other big grocers have left behind because it simply isn’t profitable to put a supermarket there. These are usually poor communities, and communities of colour,” he added.

Stacy Mitchell, a senior researcher at the Institute for Local Self- Reliance, notes, “For neighbourhoods that are truly underserved, it seems hard to argue with the notion that having a Walmart nearby is better than relying on 7-11 and McDonald’s for meals.

“But poor diet, limited access to fresh food, and diet-related health issues are a cluster of symptoms that all stem from a deeper problem that Walmart is likely to make worse (by killing retail and manufacturing jobs): poverty.”

When President Barack Obama visited New Delhi for a series of discussions on U.S.-India agricultural and trade relations back in 2010, the business and financial media heralded the “success” of private sector investment in agriculture.

Since then, a horde of MNCs, led by Walmart, has clamoured for a more generous slice of India’s grocery market.

India’s grocery sector has traditionally been described as a gigantic marketplace, compromised not of monopolies and monopsonies but rather constellations of individual buyers and sellers who hawk their wares on carts or mats, offering a diverse range of fresh produce, meats and vegetables at hitherto ‘unbeatably’ cheap prices to buyers.

In fact, 90 percent of Indian consumers’ groceries are delivered right to their doors, according to Vandana Shiva, author of “Stolen Harvest: The Hijacking of the Global Food Supply”.

“Walmart’s entry into the market would destroy that entire system,” Shiva said.

*This is the second of a two-part series on Indian retailers’ fight against Walmart and the corporation’s economic and social legacy in the United States.