Brazil to Open Doors to Skilled Immigrants, Slam Shut to Others

RIO DE JANEIRO, Mar 7 2012 (IPS) - In designing a new immigration policy, Brazil is caught between the need to attract skilled workers and professionals in order to meet the challenges posed by economic growth, and its tradition of taking in immigrants for humanitarian reasons. 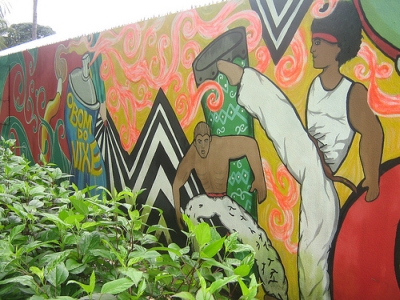 Brazil’s population is made up of a mix of migration flows, as reflected by the mural on this wall at the Bom Jardim Cultural Centre in Fortaleza. Credit: Mario Osava/IPSBrazil

Moving abroad was not easy for Vera Sardinha, an educational psychologist who also has a degree in philosophy, specialising in marketing, and was unemployed in Portugal, her home country.

“I asked around, I investigated Brazil and Rio de Janeiro, I packed a suitcase with clothes and I came here to find work,” Sardinha, 31, told IPS. She said she chose this country because it is one of the BRICS emerging nations – Brazil, Russia, India, China and South Africa.

But foreigners with just a tourist visa cannot get a job in Brazil, and attaining a work visa is difficult, even for people from Portugal, who share a common language, history and cultural aspects with Brazil.

“You have to show that you have skills that no Brazilian has,” she said. “If someone in Brazil could do the same thing, they would reject my visa application.”

After much coming and going, she was able to demonstrate that she had unique experiences in multinational companies giving her “a global perspective” that her Brazilian colleagues did not have, and she managed to get a work visa and find a job in a Portuguese company providing technology solutions for television.

“The idea that it’s easy to find work in Brazil is an illusion,” she said. “It also depends on your educational background. A lawyer shouldn’t even bother trying, but it’s easier for engineers and economists.”

The government has a specific interest in certain professions. The new immigration policy being drafted by the secretariat of strategic affairs is aimed at drawing highly qualified young professional and restricting the inflow of unskilled workers.

The head of the secretariat, Ricardo Paes de Barros, told the newspaper O Globo that the hurdles put in place by the 1980 statute on foreigners, adopted during the 1964-1985 military dictatorship, would be struck down for highly qualified professionals.

“Because Brazil is now an island of prosperity in the world, many high-quality professionals want to come here,” he said. “But the queue for a visa is the same for everyone. We are taking a clinical look at who will provide us with technology.”

The initiative, which has not been officially announced, will follow the example of Canada and Australia, which have opened their doors to professionals and businesspersons while trying to screen out the rest.

The new policy is based on the fact that government studies and demand from companies highlight a shortage of skilled workers in what is now the world’s sixth largest economy.

The statute on foreigners has different requisites for temporary and permanent residence permits and work visas, depending on the origin of the foreign applicants and other elements, such as the availability of local workers in each sector. It also provides for visas for humanitarian reasons and refugees.

“The main difference between today’s expatriates and the immigrants of the past is that in order to justify their presence in the country, they have to bring added value to a company,” Gaetano Francini, an Italian vice president of the branch of a multinational digital TV company, told IPS.

Maurício Santoro, a Brazilian political analyst with the independent Getulio Vargas Foundation (FGV), is the grandson of Italian immigrants who were “peasants with little education,” like many of those who came to Brazil in the first half of the 20th century.

Today, by contrast, European immigrants tend to be people with bachelors, masters or doctoral degrees who were unable to find employment in their own countries, he told IPS.

“They see Brazil as a land of great opportunities for growth and development, where there is demand for skilled labour. Brazil needs engineers, scientists and technical personnel, and Brazil’s schools are unable to train enough professionals,” Santoro said.

Official studies confirm that there is a shortage of between 200,000 and 400,000 qualified professionals – a deficit that has been accentuated by Brazil’s growth in areas like the oil industry, mining and information technology.

That demand is also driven by major public works projects in preparation for the 2014 FIFA World Cup and the 2016 Olympic Games, and by the construction of huge hydroelectric dams to help meet the country’s fast-growing energy needs.

“In my area, the hydraulic market, Brazil is number one in the world,” Yann Chachereau, a 26-year-old hydraulic engineer from France who has so far failed to find work in this country, told IPS.

Another FGV study indicates that the IT industry will have a deficit of 800,000 professionals from here to 2014.

The initial aim of Brazil’s new immigration policy will be to draw professionals from Europe, where unemployment among young people has hit record highs. The number of immigrants who came from Spain, for example, was 45 percent higher in 2011 than in 2010.

By the end of 2011, there were two million foreign nationals living legally in Brazil, according to official figures – equivalent to approximately one percent of the country’s population of 198 million.

There are also some 600,000 undocumented foreigners in the country, according to unofficial estimates.

But in Brazil, the number of immigrants is rising fast. The government reported that the number of foreign-born people increased 50 percent in 2011, and the number of work visas issued was 32 percent higher than in 2010.

For the first time in two decades, more people entered the country than left it in 2011, and Brazil returned to its tradition as a recipient country, with which it had broken as a result of high levels of poverty in the past.

China, which is now Brazil’s leading trade partner and main foreign investor, was the source of the largest number of applications for work visas, followed by the United States, Portugal, France and Spain.

“One hundred years ago immigrants were poor. But now it is expatriate intellectuals who are moving around the globe,” Cesare Simone, a 34-year-old Italian engineer who works in the Brazilian office of a French firm, commented to IPS.

But while the country is preparing to open its doors to these “expatriate intellectuals” by removing the hurdles currently in place, the borders are closing more tightly against poor, unskilled workers.

“We have to define how far our generosity will go, how we are going to contribute to easing poverty in the world and absorbing these people,” Paes de Barros told O Globo. “Solidarity has to have limits within which Brazil can help.”

For example, several thousand people have arrived from Haiti since 2010, entering the country through the northern rainforest states of Acre and Amazonas, fleeing their country, which has not yet recovered from the devastation caused by the January 2010 earthquake.

Brazil, which heads the United Nations peacekeeping mission in Haiti, has become a new destination for the Haitian diaspora.

In January, the government reported that more than 4,000 Haitians who had entered Brazil over the last two years would be granted legal status, but that only 100 visas a month would be extended to new Haitian immigrants.

In addition, border controls will be beefed up to keep people smugglers or “coyotes” from bringing undocumented migrants into the country.

The government’s National Committee for Refugees said Haitians are immigrants, not refugees, but they have been allowed to stay in the country for humanitarian reasons.

“When I see these Haitians who want to come to Brazil, it reminds me of the story of my family, and I think that if the new law would have been in force in the days of my grandparents, they would not have been able to come,” Santoro said.

In the view of this grandson of nearly illiterate immigrants, who is today one of the country’s most prominent political scientists, Brazil is facing a challenge involving human rights, and not only economic and technological issues.

“We must not make the same mistake that Europe and the United States have made, closing their doors to poor people who also want to come and work,” he maintained.