YEREVAN, Mar 16 2012 (IPS) - To the British Museum, she is “probably Aphrodite”, the Greek goddess of love and beauty. To most Armenians, she is Anahit, an ancient Armenian goddess of fertility. 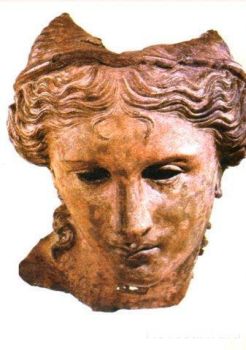 The bust of Anahit is better known in Armenia than even the country's state emblem. Credit: Public domain

Whoever is on the 1st century BC female bronze head with wavy hair and aquiline nose, it may serve as a political prop in Armenia’s looming parliamentary election campaign.

The bust, housed in the British Museum, is featured on Armenian beauty parlor logos, coins, banknotes and stamps alike. It is better known in Armenia than even the country’s state emblem, a recent TV opinion poll indicated. If asked, many Armenians most likely assume that the head, and a companion hand, are in Armenia itself.

And, now, Education Minister Armen Ashotian, a leader of the governing Republican Party of Armenia, along with the party’s Armenian Youth Foundation (AYF), want to make sure that, one day, they will be.

In February, Ashotian and the AYF launched an online campaign to gather petition signatures aimed at having the British Museum turn over to Yerevan ownership of the 1st century BC hand and head.

Ashotian disclaims any political motive, saying the timing of the petition drive has nothing to do with the upcoming parliamentary election. It is instead, he says, tied to the arrival of new British envoys, the husband-wife team of Jonathan Aves and Katherine Leach, to Yerevan in January.

The parliamentary vote is scheduled for May 6, and the governing coalition, which is dominated by the Republican Party of Armenia, stands to potentially benefit from the publicity surrounding the initiative.

“It’s merely my own initiative as a citizen. Not as a politician,” Ashotian told Armenian media outlets.

Holding posters of the goddess and chanting “Anahit, come home!”, roughly a hundred young people gathered on Mar. 7 in front of the British Embassy to present Ambassador Leach with a petition of 20,000 signatures. An accompanying letter expressed thanks to the United Kingdom for keeping an eye on the goddess, but asserted that “historical justice requires” that the statue’s head and hand “be repatriated and find refuge in the country of their origin”.

In response, the British Museum has agreed to a temporary exhibition of Anahit in Armenia, according to the British Embassy. Details are not yet available.

Ashotian called the exhibition “the first step” in what he predicts will be “years of consistent work and efforts (that) will result in the permanent return of this highly important relic of ours.”

Some local experts scoff at the campaign to recover Anahit, characterising it as a sideshow.

“Have we run out of all other issues?” asked Zhores Khachatrian, a leading expert on Armenian art from the Hellenstic period at the National Academy of Sciences of Armenia. “It’s pointless and… populism that failed from the start.”

The head and hand were found in the 1870s in what is now northeastern Turkey, near the current village of Sadak, an area once believed to have been part of an ancient Armenian kingdom, but also fought over by Persians, Greeks and Romans.

Khachatrian cautioned that “the Armenian origin of the statute still has to be proven.” Persia had a similar goddess, called Anakhita, but Khachatrian believes that “it is more possible that it may be the statue of a Roman pagan goddess.”

The statue was found near the site of a Roman camp inhabited during the same time period as Anahit’s supposed creation.

Anelka Grigorian, the director of Armenia’s State History Museum, expressed similar scepticism about the Anahit initiative. With roughly five million visitors per year, according to museum data, the British Museum brings the goddess’s head and hand far more potential attention than any Armenia-based museum could, she said.

Legally, Armenia does not have a leg to stand on for laying claim to Anahit’s head and hand, warned Vahan Gasparian, who leads the Ministry of Culture’s Agency for the Preservation of Historical- Cultural Heritage.

“(Anahit) was not illegally exported from our country, nor was it a war trophy, so that the ministry could try to return it with references to international treaties,” Gasparian said. “It’s possible only as an act of good will.”

Culture Minister Hasmik Poghosian, who is not a Republican Party member, is also lukewarm on the idea.

“At this moment, what matters more than bringing it back to Armenia is proving its Armenian origin,” Poghosian told EurasiaNet.org. She described the existing British Museum description of the head as inadequate.

For the governing coalition, the Republican Party of Armenia in particular, the Anahit campaign can potentially serve as a welcome distraction from discussion of more substantive issues, including unemployment.

Although members of the governing coalition are probably not relishing the need to defend their economic record, Bozoian added that he saw no clear sign that the Anahit initiative was concocted to divert public attention from pressing issues.

Armenia’s election campaign officially does not begin until Apr. 8.

The AYF youth activists who are co-sponsoring the campaign cite Egypt as a precedent that buoys their hopes.

“To our knowledge, Egypt has been able to bring back more than 5,000 items over the past few years, 400 of which were from the British Museum,” said AYF spokesperson Lilit Grigoryan. “All we are asking for is one item.”

Grigorian, the state museum director, says she can relate to the youth activists’ “emotional reasoning”, but believes the campaign ultimately will fail.

“Museums are greedy,” Grigorian said. “The British Museum has bought it and will, naturally, never return it to us, which is quite normal.”