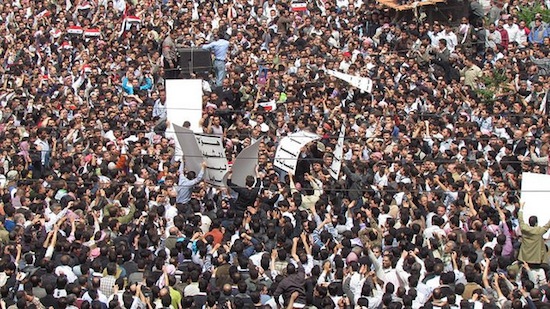 BEIRUT, Mar 26 2012 (IPS) - The Druze stronghold of Sweida, Syria, witnessed several pro-democracy protests last week. While the movement remains marginal, it is charged with symbolism: the Druze have long been considered the “spiritual cousins” of the Alawites, the religious group to which the Assad family belongs.

The question now on the table is whether or not the recent outbursts of Druze opposition to the regime could be a tipping point in favour of the Syrian revolutionaries.

Over the centuries the Druze minority, which make up about three percent of the Syrian population and are located primarily in the Sweida area, also known as Jabal al-Druze (the Druze mountain), has spearheaded various Syrian revolutions, including battling Ottoman rule and the authority of the French mandate system.

Over the last decade, the community developed excellent relations with president Bashar al-Assad, who could sometimes be spotted visiting local Druze families.

These close ties, however, did not make Sweida immune to the pro-democracy uprising, which has claimed almost 7,500 lives in Syria since Jan. 2011.

“Demonstrations are taking place more frequently although on a much smaller scale than in other regions. Last week, fifteen protests took place in several Druze villages,” Rima Fleyhan, a member of the Syrian opposition, told IPS.

Protests are mostly taking place in the Sweida capital and Qraya – the birthplace of the historical Druze revolutionary figure, Sultan Pacha al-Atrash, who led the Syrian Revolution from 1925–1927 – and springing up more regularly in Chahba, another city in the Druze region.

“While still marginal, the protest movement is essentially comprised of students, lawyers and engineers as well as leftists. Since its inception, it always consisted of the community’s elite,” acknowledged Talal el-Atrache, author of ‘When Syria awakes’, who spoke to IPS over the phone from Sweida.

Conversely, elsewhere in the country, the overwhelming majority of protestors have been from farming communities and impoverished areas, with the movement slowly expanding into the upper echelons of society.

“When the pro-democracy movement first started, Bashar al-Assad met with the (Druze) community’s three (highest ranking) sheikhs (clerics) and warned: ‘We are both Druze and Alawites, minorities in this country. Do not get involved in the protests’,” activist Muntaha al-Atrash, daughter of Sultan Pasha al- Atrash, told IPS.

According to several sources, Druze sheikhs tried to contain the movement before things got out of hand by intervening personally to quell demonstrations in order to avoid violent repercussion from the government.

In spite of such efforts, two local ‘popular committees’ have been formed, affiliated with the opposition’s Local Coordination Committee (LCC). “We have also formed a unit comprised of Druze military men,” added colonel Aref Hamoud from the Free Syrian Army (FSA), who spoke to IPS on the phone from Turkey.

According to a post by the LCC, the FSA’s Sultan Pasha Al-Atrash Brigades attacked a military outpost yesterday, resulting in the killing of one officer from the national army and the defection of 28 soldiers, though this information is difficult to verify independently, due to the media ban enforced in Syria.

Several obstacles continue to hamper the Sweida-based pro-democracy movement. Security police and “shabiha” (thugs) loyal to President Assad have been able to disperse most protests rapidly. According to Fleyhan, the absence of religious centres poses a major logistical problem for the Druze, since mosques have served as convenient rallying points for protestors elsewhere in the country.

Another factor accounting for lower turnout at protests can be attributed to the massive emigration of Druze youth, leaving the region devoid of a group that has been at the very core of the revolution in other parts of Syria.

Experts like Talal el-Atrache cite several other reasons as possible causes, “mainly, the ongoing militarisation of the rebellion resulting from repression, which is diverting the popular uprising from its initial goals,” he said.

Ashraf Jaramani, a local resident also involved in politics believes that the deadly threat of civil strife as well as the Islamist dimension of the protests may have discouraged the Druze from plunging into the movement.

“If Syria follows Egypt and Libya, who will guarantee the Druze that the Muslim Brotherhood will not govern the country? What will happen to minorities rights then?” Jaramani asked IPS.

The community is also wary of an internationalisation of the conflict, in which Syria could become a battleground for the rivalry between Shiite and Sunni countries.

“The Druze do not want Syria to follow in Lebanese footsteps,” stressed Talal el-Atrache, referring to the decade and a half long civil war that plagued Lebanon from 1975 to 1990.

The Druze community in Lebanon has attempted to inflame their coreligionists. In several editorials in his weekly newspaper, Walid Joumblatt, the most prominent leader of the community, urged the Druze in Syria to take the side of the revolution.

“Beware you Arab strugglers in the Druze Mountain against yielding to the Shabbiha in confronting your brothers in Syria,” he said. The Druze leader had also previously called on young Druze soldiers in the Syrian army to “disobey military commands to kill their brothers.”

The Center for Documenting Violations in Syria, run by activists in the LCC, puts the number of slain soldiers from Sweida at 31, as of Jan. 25. Others believe the most recent figure is likely closer to 80.

For Muntaha al-Atrash, the Druze playing a larger role in the protests will be a major drawback for the regime, as Sweida, together with the Daraa province, form the District of Hauran.

The Assad regime, wary of the threat such a united front might pose, is still attempting to court the minority. Security forces have avoided killing any Druze demonstrators while activists say that detained prisoners were given preferential treatment. The regime is avoiding a violent crackdown in regions inhabited by religious minorities, in order to preserve the ‘Islamic label’ given to the Syrian revolution, said Fleyhan.

But some activists believe that security forces are losing patience and will end up making tactical mistakes, which will backfire as pressures mounts in the region.

“When (the whole) of Hauran rises,” predicts Muntaha al-Atrash, “it will be difficult to bring it down.”