UNITED NATIONS, Mar 8 2012 (IPS) - As the besieged government of President Bashar al-Assad continues to violently suppress the warring political opposition in Syria, the United Nations has expressed “concern” over reports “on the possible existence of chemical weapons” in the embattled Middle Eastern country. 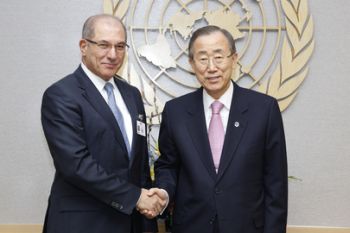 But so far there is no evidence that Syria has deployed any biological or chemical weapons, which are banned under an international convention currently in force.

John Hart, senior researcher and head of the chemical and biological security project at the Stockholm International Peace Research Institute (SIPRI), told IPS there are indications that Syria has developed and stockpiled chemical weapons.

But “it is not possible for me to say with certainty that this is the case”.

The specific information is generally classified, he said, pointing out that various governments, particularly Israel and the United States, have issued statements over the years saying they believe Syria possesses an offensive chemical weapons programme. “Some of the infrastructure may be underground,” said Hart.

Last week, Republican U.S. Senator Richard Lugar told the Senate Committee on Foreign Relations, “We know that Syria has substantial stockpiles of chemical and conventional weapons that could directly threaten peace and stability throughout the region.”

“Our government should be focusing intelligence and counter- proliferation assets on containing this threat,” he added.

But U.S. Assistant Secretary of State for Near Eastern Affairs Jeff Feltman told the committee the United States has no indication that any of the stockpiles of chemical weapons have fallen out of the control of the Syrian government – thereby validating the claim that Syria is in possession of such weapons.

On Wednesday, General Martin Dempsey, chairman of the Joint Chiefs of Staff, told the U.S. Senate Armed Services Committee that the United States was reviewing several options, including humanitarian airlifts, naval monitoring, aerial surveillance of the Syrian military forces and the establishment of no-fly zone.

But if the administration of President Barack Obama decides to intervene, it is expected to do so with the help of a broader Western coalition.

With Russia and China exercising their vetoes – twice – against resolutions condemning Syria, the Security Council is not likely to approve any international military intervention in Syria.

Meanwhile the threat of chemical weapons has added a new dimension to the crisis in Syria.

The Chemical Weapons Convention (CWC), banning the development, production, acquisition, stockpiling, retention, transfer or use of chemical weapons, was adopted in Geneva on September 1992.

But Syria, along with Angola, Egypt, North Korea, Somalia and South Sudan have neither signed nor ratified the convention.

A total of 188 countries are currently states parties to the CWC. Two countries, Israel and Myanmar (Burma), have signed but not ratified the Convention.

The Organisation for the Prohibition of Chemical Weapons (OPCW), based in The Hague, Netherlands, has monitored or overseen the destruction of more than 60 percent of the declared stockpiles of chemical weapons worldwide.

Last week, OPCW Director General Ahmet Uzumcu met with Ban Ki-moon at U.N. headquarters to update the secretary-general on the current state of chemical weapons worldwide, including the ongoing efforts to ensure the destruction of these weapons in Libya.

SIPRI’s Hart told IPS, “I suspect they discussed the basic facts of Syria’s chemical defence establishment as they understood them.”

They probably also discussed the main broad scenarios about the fate of possible chemical weapons stocks and infrastructure given the continuing instability inside the country, he said, adding that each person probably focused on the broader political implications and coordination and consultation options.

Technical experts from the U.N. and the OPCW Technical Secretariat were also probably involved to support the consultation, Hart said.

There are a large number of media reports regarding supposed Russian technical support in an alleged use of “neuroparalytic agents” against protestors in Homs, the Syrian city under siege.

On Feb. 21, Hart said, the Russian Foreign Ministry issued a denial of this story.

“To reiterate, the news items alleging this are continuing and may partly result from a ‘spin’ or disinformation effort,” he said.

The Soviet and Syrian chemical defence communities did have contact in the 1980s. This contact included the hosting by the Shikhany Central Scientific-Research and Experimental Institute of Radiological, Chemical and Biological Defence (formerly the principal Soviet CW field test facility) of at least one Syrian military delegation.

Hart said this is indicated by articles in the London-based Jane’s Defence Weekly and Russian-language histories of the Soviet chemical defence establishment.

One of the Shikhany commanders (Anatoly Kuntsevich, now deceased) was charged in the 1990s by Russian authorities for an illegal chemical transfer to Syria. The charges were almost certainly partly politically motivated, and later dropped.

It should also be noted that it is not unusual for states to cooperate on defence matters, including with respect to chemical weapon threats. This continues today and such cooperation – if for defensive purposes – is not prohibited.

There is also a long history of media accounts of military-to-military links between North Korea and Syria, Hart pointed out.

“It is difficult to ascertain their veracity and significance,” he concluded.