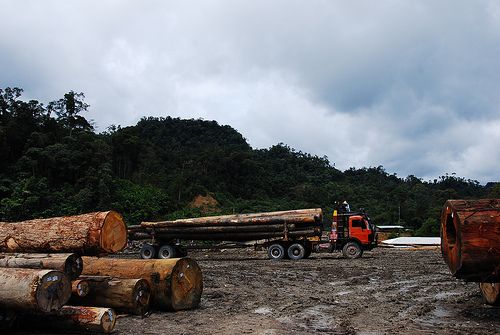 WASHINGTON, Mar 21 2012 (IPS) - With illegal loggers clearing the equivalent of a football field of the world’s most valuable forests every two seconds, local and international law enforcement systems should target the criminal operations that profit most from the trade, according to a new report released here Tuesday by the World Bank.

Criminal justice personnel should deploy the same tools they use to fight drug trafficking and money laundering to investigate, prosecute and punish the kingpins behind large-scale illegal logging, according to the 56-page report.

Such efforts should complement preventive measures, including educating consumers about the problem, promoting legal reforms governing forest tenure and timber rights, and using certification and related methods to make it easier to differentiate between legal and illegally logged timber.

While preventive efforts have enjoyed a sharp increase in international and public attention and support in recent years, they have until now had relatively “little impact” in curbing the problem, according to the report, “Justice for Forests: Improving Criminal Justice Efforts to Combat Illegal Logging”.

While “preventive actions against illegal logging are critical,” said Magda Lovei, the Bank’s sector manager, “we also know that they are insufficient.”

“The overall message of this paper is that law enforcement (investigation, prosecution, imprisonment, and the confiscation of illegal proceeds) can no longer be shunted into a corner,” according to the report. “Rather, it needs to form part of an integrated and sustainable solution to the problem of illegal logging,” it said.

Some environmental groups active in exposing illegal logging said the report should prompt the Bank take a closer look at how its own operations may be contributing to the problem.

“While it is a step in the right direction for the World Bank to look at what actions are needed to curb illegal logging, what is really needed is for the Bank to look at its own role in financing industrial-scale operations that benefit from legal and illegal clearance of rainforests,” Lindsey Allen, forests programme director at Rainforest Action Network, told IPS.

“When we follow the money and look to stakeholders who have reported on these issues, as the report recommends, we find that the World Bank and IFC are bankrolling the infrastructure and expansion of destructive sectors such as pulp and palm oil.

“Rainforest Action Network would echo many of the recommendations in this report, while adding the recommendation that the World Bank Group specifically look at its own financing of operations that fail to engage stakeholders and incentivise forest clearance at any cost as has been our observation of World Bank Group projects in Papua New Guinea and Indonesia,” she said.

Other groups agreed, while welcoming the report’s emphasis both on strengthening law enforcement and on targeting the criminal organisations behind the trade.

“People are risking their lives in enforcement against criminal gangs operating illegally within the forest, but it’s the powerful, untouchable actors behind the scenes who need to be brought to justice,” said Faith Doherty, the head of forests at the London-based Environmental Investigation Agency (EIA), which has been tracing and exposing the illegal logging and timber trade in Asia for the past 12 years.

“Among the ways to achieve this is enforcing anti-money laundering and due diligence requirements, and following the money trail – some of the many recommendations of this report. By doing this, attention will be properly directed to the ‘untouchables’ at the top, rather than arresting the poor who are usually hired to do the work in the forest,” she told IPS via email.

“We commend the World Bank researchers who produced this important report,” said Susanne Breitkopf, Greenpeace‘s senior political adviser on forest and climate, “and wish that the Bank’s management and country teams will take it to heart and act on it.”

In some countries, including Cambodia, Indonesia, Papua New Guinea, Gabon, Bolivia, Ecuador and Peru, illegal logging accounts for between70 percent and 90 percent of all logging, thus depriving governments and local communities of desperately needed revenue and fuelling massive corruption.

The report estimates that total receipts from illegal logging worldwide run between 10 and 15 billion dollars a year.

In addition to the financial losses, illegal logging inflicts serious damage on local communities by undermining the legitimate livelihoods of people who live in and around the forests.

Clearing the forests also causes major harm to the local and global environments by eroding the soil, causing flooding, reducing biodiversity, and releasing climate-warming carbon stored by forests into the atmosphere.

The report stresses that law enforcement must focus less on low-level criminals who resort to illegal logging to lift their families out of extreme poverty, and much more on the “criminal organizations or intermediaries ultimately responsible for these crimes”.

“All too often, investigations – in the rare event they do take place – are amateurish and inconclusive, and the few cases taken to court tend to be of trivial significance, prosecuting people whose involvement in crime is due to poverty and exploitation,” it said.

“We need to fight organised crime in illegal logging the way we go after gangsters selling drugs or racketeering,” said Jack Pesme, manager of the World Bank’s Financial Market Integrity team that advises countries on combat illicit financial transactions, such as money laundering.

“Indiscriminate arrests or needless harassment of poor people – even of those who might, because of exploitation and manipulation, be involved in illegal activities – undermines the credibility of forest law enforcement by ignoring the organizations and ‘masterminds’ in control of the illegal activity,” according to the report.

The report noted that Western countries, including the U.S. and the European Union, are taking important steps to bar illegally logged wood from entering their markets, primarily through certification mechanisms, and urged that other countries follow suit.

But it also stressed the importance of “following the money” – tracking the proceeds from illegal logging as they move from bank to bank to determine the identity of the kingpins and the corrupt officials they pay off for protection.

“Ultimately, the proceeds from illegal logging have to find a way into the financial system,” noted Rick Jacobson, the team leader for international policy at Global Witness, which has done ground- breaking work on tracking illegally extracted resources in poor countries to markets in developed nations.

“This approach certainly would expand the set of tools available to crack down against (the trade).”

Going after corrupt officials, including high-ranking politicians who may benefit from illegal logging, was critical, he stressed. “No forest sector reform (of the kind the World Bank has promoted) is going to be successful if you’re unable to tackle high-level corruption and the political economy of the forest sector. Though the Bank acknowledges these issues on paper, it has historically been weak in integrating them into its forest sector work.”

Greenpeace’s Breitkopf agreed, noting that in some Congo Basin countries, “it is quite common for ministers and other high-level politicians to be directly involved in the logging business.”

“From what I have observed, the World Bank has so far largely failed to support the criminal-justice system in its forest programme and relied too heavily on soft reforms, voluntary schemes, and the private sector,” she told IPS, citing a decade’s worth of Bank-backed forest-sector reforms in the Democratic Republic of Congo (DRC).

“After 10 years of reform, these systems are still completely dysfunctional, and basic information about forest operations is still not available to the public or local communities.

“We have repeatedly alerted the Bank to shortcomings that things that need to be done, but it has never followed up,” she went on.

“We acknowledge that it is a difficult task, because it is often very difficult to get buy-in from government officials who have no interest in changing or cleaning up the system. So we hope that the Bank will take this report very seriously and put a lot more emphasis on strengthening criminal justice in the sector.”