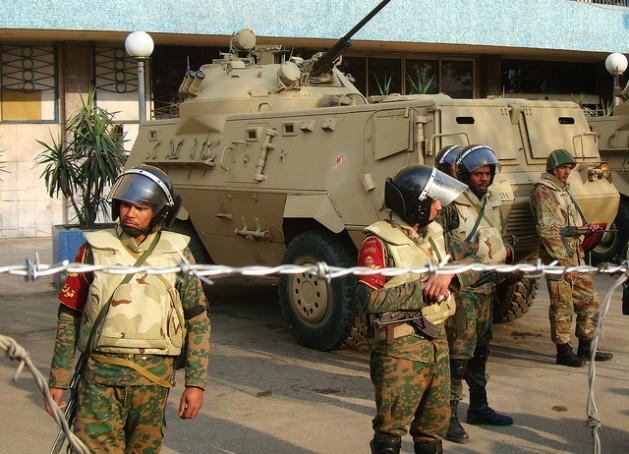 An elected government is unlikely to dislodge military might in Egypt. Credit: Cam McGrath/IPS

CAIRO, May 22 2012 (IPS) - As Egyptians prepare to elect their country’s first president since the uprising that toppled dictator Hosni Mubarak, the military junta that has ruled for the last 15 months has shown little sign it is prepared to accept civilian oversight.

“Dismantling the military’s hold on the state is a process that will take years,” says Robert Springborg, professor of national security affairs at the Naval Postgraduate School in the United States. “The military has set red lines beyond which civilian control will not be asserted.”

Egypt’s military establishment has quietly dominated political life for nearly 60 years. Four presidents hailing from military backgrounds, and now a council of generals, have run Egypt since the country’s last monarch was toppled during an army coup in July 1952.

This left the generals free to build their economic empire, running unregulated factories, taking kickbacks on government contracts, and amassing fortunes by selling off state land.

Experts estimate that the military oligarchy controls anywhere from five to 40 percent of the Egyptian economy, but the real figure may never be known. Information on the military’s businesses and assets is considered a classified state secret – reporting on them can land a journalist in jail.

What is known is that Egypt’s past presidents paid handsomely for the military’s loyalty, dishing out various material perks and privileges. Upon retirement, senior military officers were typically given a province, city or municipal authority to manage. Others were assigned to head public sector companies or serve on their boards.

Consequently, retired military officers hold almost every influential position in the state. They occupy government authorities, regulatory agencies, and even head the presidential elections committee, whose rulings cannot be appealed.

Military-owned companies operate free of taxes and government oversight, benefiting from access to public land and some 250,000 conscripts – who constitute what is essentially a free labour force.

“Given the degree to which Egypt’s military has penetrated the state, the state is more or less at its service,” Springborg tells IPS. “What the military decides to do with the state’s resources is entirely their business… as it operates without any degree of oversight or accountability.”

The leading candidates in Egypt’s presidential race have promised that the army will not be above the president or the constitution. But dismantling the military’s grip on power, or revoking its economic privileges, could lead to a dangerous confrontation.

“Unless they want to engage in self-destruction, I don’t see any political actor challenging the military directly or immediately,” says Springborg. “The best they can do is begin to lay the foundation so that over an extended period of time the military would be brought under greater civilian control.”

The Supreme Council of the Armed Forces (SCAF), led by Mubarak’s long-time defence minister, had initially promised to hand over the country to an elected civilian government within six months. After running out of excuses to linger, it agreed to hold presidential elections and cede power by the end of June.

The generals have used the prolonged transition to consolidate their power base. The SCAF has appointed active and retired military officers to administer key civilian positions in industry, real estate and media. Military judges have been assigned to handle civilian cases, handing down swift and severe sentences to protesters who oppose SCAF policies.

The military leadership has crafted draconian legislation that restricts press freedoms and outlaws many forms of popular protest. Anti-corruption drives and rulings ostensibly aimed at “restoring stability” appear as thinly-veiled pretexts to settle scores, quash dissent, and preserve the special privileges the army has enjoyed for over 60 years.

Hossam Bahgat, executive director of the Egyptian Initiative for Personal Rights (EIPR), says the SCAF is trying to ensure that the military’s position and privileges are unassailable even under civilian rule. At minimum, the ruling generals want the final say on all issues of national security and military affairs, and to safeguard the military’s budget and economic activities from civilian oversight.

“It’s clear that the SCAF does not want an elected civilian president to have control over the army,” says Bahgat.

The generals still have time to set the rules. Egypt’s parliament has been unable to agree upon a constituent assembly to write a new constitution that would specify the new president’s powers.

Some legal experts argue that until a new charter is inked the SCAF will retain authority over the president and parliament. One way it could extend this control is through a proposed National Security Council. The council – comprised of cabinet ministers, parliamentarians and senior army officers – would give the generals a voice in issues ranging from foreign policy to bread shortages.

According to Bahgat, SCAF leaders might view the proposed body as a way to “dilute the power of the president’s command over the military” while appearing to subordinate to civilian rule.

Yet it is unlikely they would agree without assurances that preserve their economic privileges, ensure their role in national security policy, and – given the many allegations of rights abuses during the last 15 months – provide immunity from prosecution. (END)