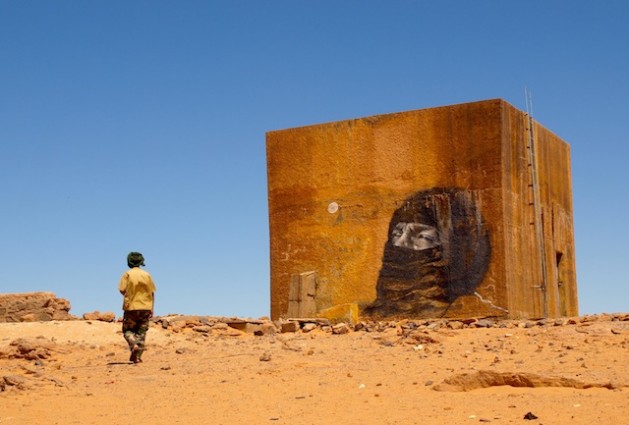 Conflict is brewing in the Western Sahara. Credit: Karlos Zurutuza/IPS.

TINDOUF, Algeria, Jun 27 2012 (IPS) - “We’ve been building a lot of new walls lately,” says Polisario Front commander Ahmed Salem as he drives his 4 X 4 across Tindouf in Western Algeria. But the newly introduced security measures may not be enough to ensure the survival of the Western Sahrawis.

Salem Ahmed drives along the desert sand wall towards the entrance of Rabuni camp near Tindouf (about 700 km southeast of Moroccan capital Rabat). Rabuni is the nodal point for refugee camps in southern Algeria for the Sahrawis, as the local Western Sahara people are called.

Just a few yards from where an excavator that works day and night, we are waved in through a checkpoint manned by men in camouflage from the Polisario, which heads the Saharwi independence movement. At only a few kilometres from the Mauritanian border, this sea of mud houses and corrugated iron roofs is “home” to over 200,000 individuals.

Western Sahara was the victim of a decolonisation process interrupted in 1976, when Spain – its former colonial power since the late 19th century- left that barren land in the hands of Morocco and Mauritania. After a ceasefire agreement in 1991, most of the territory which is greater than the size of Britain -including the entire Atlantic coastline – is under the control of Morocco. A small, largely uninhabited and economically useless desert portion remains under Polisario rule, strongly backed by Algeria.

This is where the Sahrawi Arab Democratic Republic (RASD) declared its independence in 1976. Since then, the Polisario has won formal recognition for the RASD from 82 nations.

“We are totally dependent on international aid, especially from Spain. We cannot let a repeat incident, like the one that happened before, or we’ll die of hunger and thirst in the desert,” says Ahmed Salem. Spanish aid workers Ainhoa Fernandez, Enric Gonyalons and Italian Rosella Urru were abducted from Rabuni’s international camp on Oct. 22, last year.

Many suggest that the first and only kidnapping in the territory, under the Polisario Front’s control, could trigger a conflict that has remained frozen for 37 years.

The abduction was claimed by a hitherto unknown armed group, and through unusual channels. Ahmed Mohamed Ali, a worker at the centre who was handcuffed during the attack told IPS that the attackers “were not from the region and most likely of Touareg origin.” The Touareg are Berber people inhabiting the Saharan interior of North Africa.

The decrease in the number of foreign visitors is evident after the kidnapping. Rabuni camp has a capacity for 200 visitors; usually now there are just half a dozen.

“Any attack on foreigners, whether it’s a kidnapping, a roadside bomb, or any kind of assault can lead, in the short term, to unpredictable consequences for the future of refugees. It is certainly the most vulnerable side of the Saharawi people,” says Andoni Berriotxoa, coordinator of a project to build water wells in Bir-Lehlu, administrative capital of the Sahrawi territories under Polisario control.

The newly introduced security measures may look draconian to many: night curfew for foreigners starting at seven; compulsory military escort for any journey by road, and a network of earth and sand walls in which the Algerian army also joins with watchtowers and radars.

The Moroccan media will soon broadcast that we are restricting visits for foreigners, but this is for their safety,” says Salem. This military engineer who graduated in Cuba adds that it is Morocco that has built the world’s longest military wall: a French-designed project, over 2,500 kilometres in length, crisscrossing Western Sahara.

“It’s true that the number of visitors has dropped dramatically in the last seven months,” Salem Sehir, a Polisario executive member and district governor tells IPS. “There’s a big fear over new attacks, but we cannot forget that the financial crisis in Spain is also behind the fewer numbers. The number of our kids visiting Spain in summer was cut by half. Spanish families simply cannot afford it any longer.”

Back in Rabuni, Jatri Aduh, president of the Sahrawi Parliament and the Polisario leader in negotiations with Morocco, speaks of a conflict “that neither side is able to win.” The senior official openly admits his disappointment over the inaction of the former colonial power and of the UN, compounded by the unconditional support that Morocco gets from France.

“As a full member of the African Union, the RASD is committed to the security in the region and we will not spare any effort to implement it,” says the high-ranking official.

Aduh cannot hide his concern over the growing instability in the region, which is the only shelter for his entire people. In the inhospitable Algerian desert and halfway between the borders of Mali, Mauritania and the Western Sahara territory, this cluster of mud and corrugated iron houses lies on a crossroads for drug trafficking, and for Al-Qaeda fighters and Touareg rebels from Azawad – the newly self-proclaimed state in northern Mali.

“The challenges for the near future are so massive that we have even extended our hand to Morocco to liaise on common security issues. Unfortunately, we are still waiting for a response to our initiative.”