VERAPAZ, El Salvador, Jun 6 2012 (IPS) - Amanda Menjívar is moved by the sight of the 16 sewing machines donated to help a group of local women set up a sewing centre to get over the devastating effects of the disaster caused by Hurricane Ida in the Salvadoran town of Verapaz.

“We want to earn an income to help us get over the losses we suffered from those rains,” Menjívar, 26, told IPS. She is leading the project, which is just getting off the ground.

When Ida smashed through Central America in November 2009, it hit El Salvador particularly hard, leaving a death toll of 200 and causing 239 million dollars in material losses, equivalent to 1.1 percent of GDP, according to official estimates.

Verapaz, a town of 7,000 in the central department (province) of San Vicente, 56 km east of San Salvador, is a symbol of the tragedy caused by the hurricane in this impoverished country of 6.1 million people, the smallest in Central America.

The intense rainfall caused a mudslide from the slopes of the Chichontepec volcano, which buried much of the town.

A total of 355 mm of rain fell in just four hours – five times the average for the entire month of November. Local and international experts agreed at the time that the unusually heavy rainfall was an effect of climate change.

Three years later, the local population is still working to get over the impact of the catastrophe, which claimed 13 lives in Verapaz and destroyed much of the town’s infrastructure. 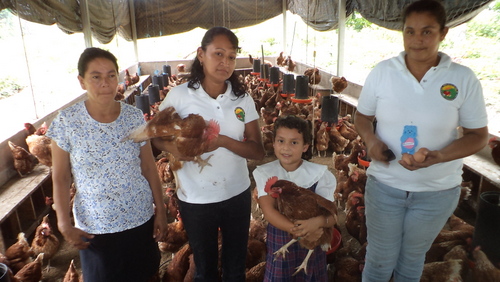 “We want to get contracts from the government to make school uniforms, but we are not going to limit ourselves to that,” said Menjívar, excited as she talked about the workshop, which she hopes will grow quickly once it begins to operate.

The sewing machines were donated by Angels in Flight, a group of flight attendants working for JetBlue, a low-cost U.S. airline.

But Menjívar also had complaints: “It’s a pity that our efforts are not really recognised, because of the persistent idea that women are incapable of pulling ahead, when we actually carry much of the burden of dealing with all of these climate changes.”

The work carried out by local women’s associations and collectives to adapt to the challenges posed by climate change is not always acknowledged by the government or by society at large.

“Women’s contribution to the struggle to adapt to climate change and achieve climate justice is largely invisibilised,” César Artiga, the president of the Asociación Nueva Vida, a local organisation that is part of the Global Call to Action against Poverty (GCAP), told IPS.

He said Salvadoran society, and especially key actors like the government and media, were not aware of the repercussions of climate change on people’s day-to-day lives.

Artiga also argued that the media are partly responsible for the invisibility of women’s work, because they still do not include issues like women, climate change and climate justice in their coverage.

To illustrate, he cited a public hearing held in December 2011, where rural women talked about the problems they faced as a result of global warming, and the efforts they were making to adapt to and mitigate the phenomenon.

Not only were government institutions absent from the hearing, but it received little media coverage, “despite the fact that El Salvador is at high risk from climate change,” Artiga said.

In fact, a 2010 report by the United Nations Disaster Assessment and Coordination (UNDAC) ranked El Salvador as the most vulnerable country in the world, with 95 percent of the population at risk of natural disasters.

“Let’s be realistic – it’s very difficult for reporters to put these (new) issues (gender and climate change) high up on the news agenda,” Nery Mabel Reyes, the president of El Salvador’s association of journalists, told IPS.

Discrimination towards women and their struggle to adapt to environmental risks represents “a lack of climate justice,” Artiga said.

He explained that this concept not only referred to the fact that different regions and population groups were affected in different ways and to varying degrees by global warming, but also extended to the recognition of adaptation efforts – in this case the ones made by women.

One of the few such projects that have been picked up by the media is a successful poultry farm run by a group of women in Verapaz seeking to pick up the pieces of their lives after the disaster caused by Hurricane Ida.

Salvadorans living in the U.S. city of Los Angeles, California donated funds to buy 500 chickens to start the egg farm in August 2011. It currently supports 15 families.

The Ministry of Foreign Relations acted as liaison between the donors and the women in Verapaz, and the National Centre of Agricultural and Forestry Technology (CENTA) provided technical support and training.

The farm sells 400 eggs a day on average. The profits cover the women’s earnings of 42 dollars a month, and the rest is reinvested in things like feed and medicine for the laying hens. The women also take home eggs for their families.

“We are very motivated; we have put everything into this, looking towards the future, for the good of our families,” 44-year-old Ana Cecilia Ramírez, who is raising four children on her own, told IPS. She heads the Los Ángeles Cooperative, which runs the egg farm.

“These 42 dollars a month are really helpful. I used to do ironing and cleaning, but I was only paid five dollars. I feel motivated to keep this project going,” she said.

Rosa Lidia Ávalos, a 43-year-old mother of four, is also happy about the farm, not only because of the material benefits it offers, but because her relationship with her husband has been strengthened since he totally supports her work outside the home.

“You’ll see how my husband brings my lunch at noon,” Ávalos told IPS during the day spent with the women at the poultry farm. And at 12:00 sharp, her husband José Raúl Romero showed up with her meal.

“I completely support her, because she is full of enthusiasm, and of hope now that they were promised that the farm would be expanded, and I think the income will increase a little, and I like to see her like this,” Romero said.

Miriam Acevedo, a 37-year-old mother of three, said it was her husband who signed her up for the project.

“We feel like we have really done something,” she said. “Our biggest dream is to have two or three sheds, to have more hens and earn more money. We have to take advantage of the high demand.”