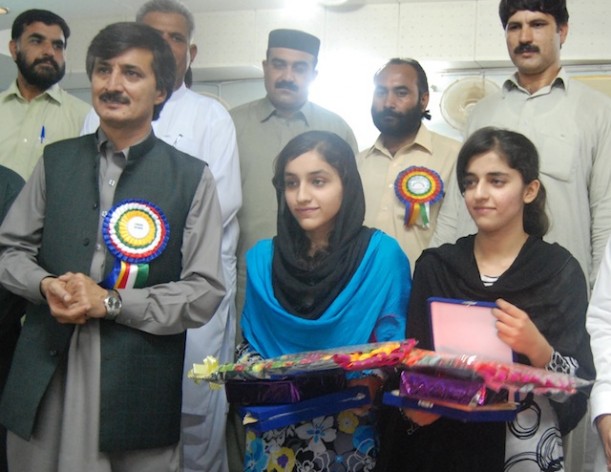 PESHAWAR, Pakistan, Jul 28 2012 (IPS) - Far from fears that female education is on the decline after the Taliban campaign against girls’ schools, female students outclassed their male counterparts in the secondary school examination for 2012.

And participation itself was a success. In all 265,000 students sat the examinations, including 115,343 girls. The results were declared over a ten-day period earlier this month.

The results have come as a boost to authorities in the Khyber Pakhtunkhwa (KP) and nearby Federally Administered Tribal Areas (FATA) regions of north Pakistan. “It’s great given the Taliban’s attitude towards female education,” KP Information Minister Mian Iftikhar Hussain told IPS.

“About 700 schools were damaged by miscreants in the last five years in KP and FATA. Despite that girls have got top positions in the secondary school certificate (SSC) examination.” The top 15 positions went to girls. This meant an outright rejection of Taliban calls against women education, Hussain said.

In militancy-riddled Malakand division in KP, girls grabbed 10 of the 20 top positions. Malakand saw destruction of 181 schools from 2007 to 2009, among them 118 were girls’ schools.

“For one-and-a-half years I sat idle due to Taliban’s opposition to female education but since their defeat in 2009, I have been studying vigorously,” Farzana Bibi, who got second place in the Board of Intermediate and Secondary Education (BISE) in Swat, one of the seven districts of Malakand division, told IPS over telephone. “Now, I intend to become a doctor and serve the women patients in my area.” The BISE is the examining body conducting the SSC examination.

The results are dramatic given that the literacy rate for women in KP is 17 percent, and in FATA 43 percent, compared to the national Pakistani average of 68 percent.

“Many people who could afford it have shifted to Peshawar and other safer places from war zones only to ensure better education for their girls,” Islamuddin Khan, controller of examinations at BISE in Pewhawar told IPS.

Khan dismissed a widely held belief that Pakhtuns are against women’s education. “Pakhtuns are spending more on women education than they do on men,” he said.

These results, he said, were made possible because the army, the police and the population in these areas stood like a rock against the Taliban.

Mardan, one of the 25 districts in KP, had seen much militancy since 2006. “The militants destroyed 23 girls schools besides burning about 150 music shops,” education officer Dildar Ali told IPS. “The city also saw several suicide bombings, two of them hitting army training centres. But now the female students are a ray of hope for a better future.”

Jamila Begum, who clinched third position in the SSC examination, wants to take on the Taliban. She said she wants to become a police officer to protect schools against miscreants.

“The government must attach great importance to women’s education,” she told IPS over telephone. “We need more investment to educate women and thwart the Taliban’s attempts of scaring women away from getting educated.” The 2012 results have shown that women are undeterred by threats from insurgents, she said.

Javid Khan, assistant controller examination at the BISE in Mardan, said it was encouraging that girls had accepted the Taliban challenge, with some support from the authorities. “We have been urging parents to concentrate on women’s education.”

There is now a need for more women teachers, he said. “We need more female teachers and doctors to cope with the problem of education health needs. The Taliban had barred female doctors and nurses from venturing out in public when they held sway over Swat till 2009.”

Senior educationist Mubarak Shah at the University of Peshawar said the Taliban ban on female education had actually worked to the advantage of women. “The majority of girls thought that education was something very precious that the Taliban were keeping them away from. The Taliban opposition reinforced the girls’ resolve to study.”

The next step would be for women to find lucrative careers, he said.