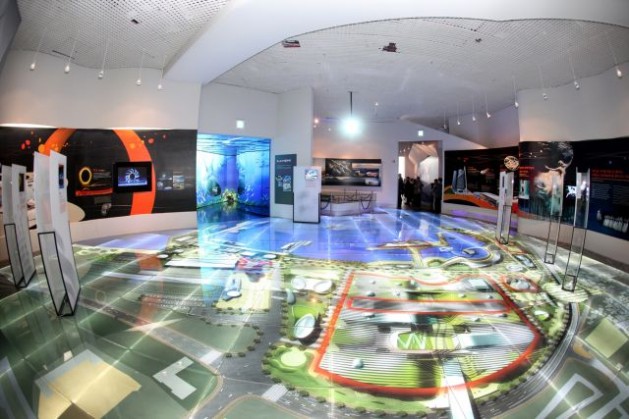 Part of the international exhibition Expo 2012 in the coastal town of Yeosu. Credit: Expo 2012

And nine months later, after showcasing the protection of marine ecosystems at its international exhibition Expo 2012 in the coastal town of Yeosu, the Korean government is in the process of transferring advanced technologies to the developing world.

The primary objective of the give-away: “The preservation and sustainable development of the marine environment.”

The aim is to address the urgent challenges faced by oceans and coasts – in line with the theme of Expo 2012.

For example, she said, “We helped Guimaras Province in the Philippines develop a framework for the provincial Disaster Risk Reduction and Management.

“We trained the provincial officials for the development of the plan, and built collaborative relationships between experts of Korea Maritime Institute and Guimaras Province to guide them through.”

The ongoing projects include case studies such as “The Climate and Ocean in Vietnam – Integrated Management of the Shrimp-farm and Mangrove Forestry in the Southern Mekong Delta” and strategic help such as “Marine Ranching Project” in the South Pacific Islands.

The Yeosu Project has been described as “fully embodying the concept of the Expo as an international cooperation programme aimed at supporting developing countries in their efforts to cope with marine environmental issues.”

The Korea International Cooperation Agency (KOICA), a government institution that manages the country’s international assistance programmes, has been commissioned to implement the Yeosu Project, a spillover from Expo 2012.

The Korean government has earmarked 10 billion won (about 8.7 million dollars) for investments in pilot projects through 2012.

The areas and projects of priority include:

Secondly, advancing the developing world in environmentally respectful marine resource development, especially in the areas of commercialisation and utilisation of marine organisms, and in the exploration of ocean mineral resources;

In May, Korea launched Expo 2012 in a sprawling Disney-like park in Yeosu which, among other things, has highlighted the achievements of the 21st century in marine science technology.

The exhibition, which has drawn hundreds of thousands of visitors since its opening May 12, is scheduled to close Aug. 12.

A longtime developing nation, South Korea is one of the few countries to graduate to the status of a developed country (along with Mexico and Chile) switching its role from an aid recipient to a donor.

Meanwhile, the U.N. Office for Sustainable Development (UNOSD), a joint effort of the United Nations, Korea’s environment ministry, the city of Incheon and Yonsei University, is based at the university in Incheon.

The Office will be managed by the U.N.’s Department of Economic and Social Affairs (DESA) and will serve as a training and research institution, and a centre for pooling sustainable development knowledge, according to the United Nations.

Sha said that in the longer term, the new office will contribute to advancing the implementation of the outcomes of the Rio+20 Conference which took place in Brazil Jun. 20-22.

He said the centre will also organise training programmes for national representatives and major groups from developing countries to advance the sustainable development agenda.

In addition, “it will undertake policy research and seek synergies through mobilising sustainable development research institutions and universities.”