Whose Timber is it Anyway? 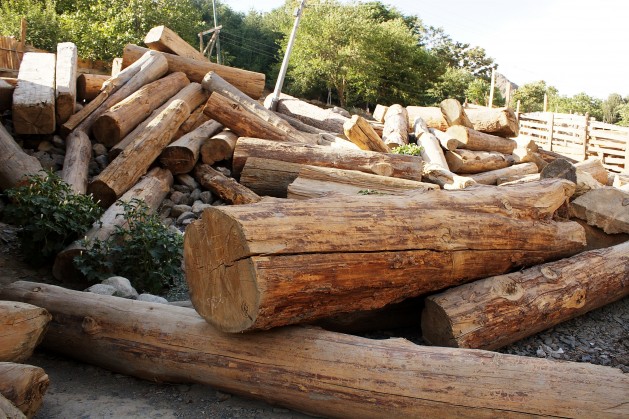 KARACHI, Pakistan, Aug 25 2012 (IPS) - With Pakistan’s last major stands of deodar (cedar) threatened by a ‘timber mafia’, the local people in the Chitral district of Khyber Pakhtunkhwa province are resorting to direct action to stop the denudation of their picturesque alpine homeland.

Since April, the community in Ayun town has been running a determined  campaign to intercept trucks carrying cedar logs out of the famed Kalash valleys.

“We have unloaded about 3,500 cubic feet of timber and nobody will touch it until a case we filed in court against the illegal felling is decided,” Fazalur Rehman, a local leader tells IPS over telephone.

Rehman’s village of Maldun is among several situated at the foot of the deodar forests, on the banks of the Chitral river that forms the gateway to the famous Kalash valleys and beyond to Afghanistan.

“There is a timber mafia working within the government’s forest department which is behind the ruthless felling and sale of timber, resulting in extensive deforestation,” Imran Schah, 39, a resident of Ayun who works as a tour operator, tells IPS.

In December 2011, the government cracked down hard on the protestors by imposing curfews on Ayun and arresting about 300 people protesting peacefully against illegal logging.

“We were implicated in terrorism cases for raising our voice against illegal felling. Every time these flimsy cases were dismissed in court, fresh charges invoking anti-terrorism laws would be filed against us,” Rehman told IPS.

“We have already spent anywhere between three and five million Pakistani rupees (31,862 to 53,103 dollars) in the courts,” says Rehman, but adds: “We will not give up. We want justice.”

“The people of Ayun are very poor and there is a clear attempt to break their resolve by harassing them and filing trumped up cases against them,” Siraj ul Mulk, 67, a well-respected hotelier in Chitral, who is familiar with the timber trade, told IPS.

Mulk averred that unscrupulous government officials were involved in the deforestation, leaving the residents of Ayun with no choice but to protect the forests around them by intercepting timber consignments.

Schah added: “The local people are under pressure from their legislators to give up the fight. I have seen people in the forest department getting rich overnight.”

Government representatives refute such allegations. Wajid Ali, environment minister in Khyber Pakhtunkwa, calls the agitation a “ploy” by the residents of Ayun to control forests that belong to the people of the Kalash valleys.

“The forestry department has a check post between the Kalash valley forests and Ayun and the villagers want this removed so that they can access the forests freely,” Ali told IPS. “The government opposes this.”

“We have no objection to the Kalashas (people of the Kalash valleys) using the timber for their own needs, but they are poor and vulnerable to exploitation by the timber mafia,” Rehman explained.

The profit margins are high. Timber traders typically pay a royalty of 74 cents per cubic foot of deodar wood in Chitral, but sell it in Karachi city at 44.68 dollars per cubic foot.

“We are naturally concerned that the Kalashas are selling off their trees at very cheap rates and rapidly because this results in soil erosion, mud slides and floods in the lower reaches,” Rehman said.

The Kalashas – who claim to be descendants of Greek soldiers who followed Alexander the Great on his India campaign – have lived in the northern Himalayan region of the Hindu Kush mountain range for over 2,000 years.

Now reduced in number to about 3,500, the Kalashas stand out in Chitral for their light hair, skin and eyes and the polytheistic religion they practice.

“In the 2010 floods our orchards and rice fields as well as water supply were completely destroyed due to massive mudslides,” said Rehman. “It’s been two years now but the water pipeline still remains in a state of disrepair.”

Deodar, a native of the Himalayas, is counted among Pakistan’s ecological treasures and its fragrant wood is popular for making doors, windows and furniture.

Although deodar trees are part of ‘shaamilat’, or community forests owned by the state, the local people have rights to use it for livelihood purposes – pastures, hunting, fruit and also use the timber for housing. But these rights are often converted into profits by the timber mafia.

The Hindu Kush Conservation Association (HKCA) and the Kalash Environmental Protection Society (KEPS) have, for several years now, been pressing the government to save the Kalash valleys by getting them  declared as a ‘World Heritage Site’ under the United Nations Educational, Cultural and Scientific Organisation.

“If a serious effort is not made by the government soon we shall lose the Kalash valleys to cement constructions and barren hills,” Kristina Petrochenkova, assistant director with HKCA and KEPS told IPS.

However, there is another way to reverse the trend of deforestation –  adopting the United Nations REDD (Reducing Emissions from Deforestation and Forest Degradation) mechanism.

“While there is a consensus that UN REDD offers a solution to curb deforestation, there are many standards and obligations to fulfil before it actually translates into action,” Syed Nasir Mahmud,  inspector general of forestry, told IPS.

“There needs to be agreement on the roles of the federal ministry and the provinces, legal and institutional reforms, transparent monitoring reporting and verification which is a foolproof system of checking whether forest cover has actually increased or not,” Mahmud said.

According to the Food and Agriculture Organisation (FAO) of the United Nations, between 1990 and 2010, Pakistan lost an average of 42,000 hectares of forest a year.

In 2010, only 2.2 percent or about 1.7 million hectares (4.2 million acres) of Pakistan’s land mass remained forested, according to a World Bank report released in 2011 and cited by FAO.