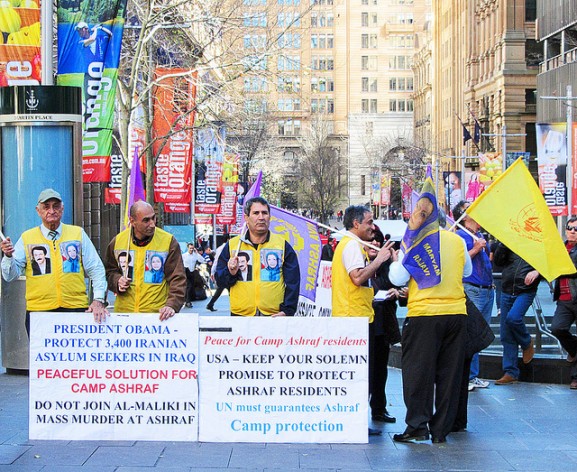 The decision, which is expected to be formally announced before Oct. 1, the deadline set earlier this year by a federal court to make a determination, was in the process of being transmitted in a classified report to Congress, according to the Department’s spokeswoman, Victoria Nuland.

The decision came several days after some 680 members of the Mujahedeen-e-Khalq (MEK), or People’s Mojahedin, were transferred from their long-time home at Camp Ashraf in eastern Iraq close to the Iranian to a former U.S. base in at Baghdad’s airport in compliance with Washington’s demands that the group move. The transfer leaves only 200 militants at Camp Ashraf out of the roughly 3,200 who were there before the transfers began.

Most analysts here predicted that the administration’s decision to remove the MEK from the terrorism list would only worsen already abysmal relations with Iran and possibly make any effort to defuse the gathering crisis over its nuclear programme yet more difficult.

“Delisting will be seen not only by the Iranian regime, but also by most Iranian citizens, as a hostile act by the United States,” Paul Pillar, a former top CIA analyst who served as the National Intelligence Officer for the Near East and South Asia from 2000 to 2005, told IPS.
“The MEK has almost no popular support within Iran, where it is despised as a group of traitors, especially given its history of joining forces with Saddam Hussein during the Iran-Iraq War,” Pillar added.

“Any effect of the delisting on nuclear negotiations will be negative; Tehran will read it as one more indication that the United States is interested only in hostility and pressure toward the Islamic Republic, rather than coming to terms with it.”

The decision followed a high-profile multi-year campaign by the group and its sympathisers that featured almost-daily demonstrations at the State Department, full-page ads in major newspapers, and the participation of former high-level U.S. officials, some of whom were paid tens of thousands of dollars to make public appearances on behalf of the MEK.

Created in the mid-1960s by Islamo-Marxist university students, the MEK played a key role in the 1979 ouster of the Shah only to lose a bloody power struggle with the more-conservative clerical factions close to Ayatollah Ruhollah Khomeini.

The group went into exile; many members fled to Iraq, which they used as a base from which they mounted military and terrorist attacks inside Iran during the eight-year war between the two countries. Its forces were also reportedly used to crush popular rebellions against President Saddam Hussein that followed the 1991 Gulf War.

During a brief period of détente between Washington and Tehran, the administration of President Bill Clinton designated the group as a Foreign Terrorist Organisation (FTO) in 1997 based in part on its murder of several U.S. military officials and contractors in the 1970s and its part in the 1979 U.S. Embassy takeover, as well as its alliance with Saddam Hussein.

When U.S. forces invaded Iraq in 2001, the MEK declared its neutrality and eventually agreed to disarm in exchange for Washington’s agreement that its members could remain at Camp Ashraf as “protected persons” under the Geneva Convention, an arrangement that expired in 2009.

The government of Prime Minister Nour Al-Maliki, however, has been hostile to the MEK’s continued presence in Iraq. Two violent clashes since 2009 between Iraqi security forces and camp residents resulted in the deaths of at least 45 MEK members.

Last December, the UN reached a U.S.-mediated accord with the MEK to re-locate the residents to “Camp Liberty” at Baghdad’s airport, which would serve as a “temporary transit station” for residents to resettle in third countries or in Iran, if they so chose, after interviews with the UN High Commission on Refugees.

Until quite recently, however, the group — which Human Rights Watch (HRW) and a significant number of defectors, among others, have described as a cult built around its long-unaccounted-for founder, Massoud Rajavi, and his Paris-based spouse, Maryam — has resisted its wholesale removal from Ashraf. Some observers believe Massoud may be based there.

Secretary of State Hillary Clinton’s increasingly blunt suggestions that the MEK’s failure to co-operate would jeopardise its chances of being removed from the terrorism list, however, appear to have brought it around.

The MEK claims that it halted all military actions in 2001 and has lacked the intent or the capability of carrying out any armed activity since 2003, an assertion reportedly backed up by the State Department.

Earlier this year, however, NBC News quoted one U.S. official as confirming Iran’s charges that Israel has used MEK militants in recent years to carry out sabotage operations, including the assassination of Iranian scientists associated with Tehran’s nuclear programme.

“Therefore, the delisting of MEK will be seen in Tehran as a reward for the group’s terrorist actions in the country,” he wrote in an email exchange with IPS. “Furthermore, Iran has firmly concluded that the Western demands for broader inspections (of Iran’s nuclear programme), including its military sites, are a smokescreen for mounting increased cyber attacks, sabotage and terror of nuclear scientists.

“Delisting MEK would be considered in Tehran as a U.S.-led effort to increase sabotage and covert actions through MEK leading inevitably to less cooperation by Iran with the IAEA (the International Atomic Energy Agency).”

He added that government in Tehran will use this as a way of “demonstrating to the public that the U.S. is seeking …to bring a MEK-style group to power” which, in turn, “would strengthen the Iranian nation’s support for the current system as the perceived alternative advanced by Washington would be catastrophic.”

That view was echoed by the National Iranian American Council (NIAC), which noted that the decision opens the doors to Congressional funding of the MEK and that leaders of the Iran’s Green Movement have long repudiated the group.

“The biggest winner today is the Iranian regime, which has claimed for a long time that the U.S. is out to destroy Iran and is the enemy of the Iranian people,” said NIAC’s policy director, Jamal Abdi.

“It will certainly not improve U.S.-Iranian relations,” according to Alireza Nader, an Iran specialist at the Rand Corporation, who agreed that the “delisting reinforces Tehran’s longstanding narrative regarding U.S. hostility toward the regime.

“Nevertheless,” he added, “I don’t think it is detrimental to U.S. interests as Tehran suspects U.S. collusion with the MEDK anyhow, whether this perception is correct or not.”

Karim Sadjadpour, an analyst at the Carnegie Endowment for International Peace, said the move was unlikely to be “game-changer” in that “the MEK will continue to be perceived inside Iran as an antiquated cult which sided with Saddam Hussein during the (Iran-Iraq) war, and U.S. Iran relations will remain hostile.”

“It doesn’t help (Washington’s) image within Iran, certainly, and some Iranian democracy activists may misperceive this as a U.S. show of support for the MEK, which could have negative ramifications,” he noted.

Another casualty of the decision may be the credibility of the FTO list itself, according to Mila Johns, a researcher at the National Consortium for the Study of Terrorism and Responses to Terrorism at the University of Maryland.

“The entire atmosphere around the MEK’s campaign to be removed from the FTO list – the fact that (former) American government officials were allowed to actively and openly receive financial incentives to speak in support of an organisation that was legally designated as a Foreign Terrorist Organization, without consequence – created the impression that the list is essentially a meaningless political tool,” she told IPS.

“It is hard to imagine that the FTO designation holds much legitimacy within the international community when it is barely respected by our own government,” she said.

No other group, she noted, has been de-listed in this way, “though now that the precedent has been set, I would expect that other groups will explore this as an option.”