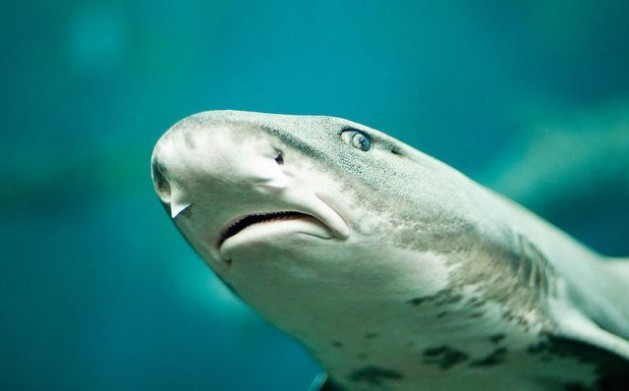 UXBRIDGE, Canada, Oct 22 2012 (IPS) - Sharks have a safe haven the size of France, and the Republic of Palau that protects them is making millions of dollars from shark tourism.

The South Pacific nation of Palau was lauded for this smart government policy in Hyderabad, India this week, winning the prestigious Future Policy Award for 2012. This year’s award is for the country with the best ocean policies.

“Other countries like Honduras, Maldives, Bahamas and Costa Rica are following suit, establishing their own shark sanctuaries or banning shark fishing,” Wandel told IPS on the sidelines of the Convention on Biodiversity conference of the parties in Hyderabad.

Last month, four of the Federated States of Micronesia announced an end to commercial shark fishing in their waters and intend to join with other nations to create the five-million-square-kilometre Micronesia Regional Shark Sanctuary.

Independent experts involved in Palau’s selection as winner were very impressed by both its Shark Haven Act of 2009 and the 2003 Palau Protected Areas Network Act, Wandel said. “The aim of the World Future Council is to raise awareness for exemplary policies and speed up policy action towards just, sustainable and peaceful societies.”

Sharks are in trouble around the world. Their numbers are plummeting, with 30 percent of all sharks and ray species endangered. Up to 73 million sharks are killed every year, primarily to support the global shark fin industry used to make shark fin soup.

Palau is home to 22,000 people on 200 small islands some 800 kms east of the Philippines. The 600,000 square kilometres in Palau’s exclusive economic zone include an estimated 130 rare shark and stingray species, including great hammerheads, oceanic whitetips, and leopard sharks.

In September 2009, Palau created the world’s first shark sanctuary, declaring all of its waters a haven for sharks and banning all fishing for sharks.

Sharks play a crucial role in the health of marine ecosystems, including coral reefs, said Anisha Grover, the policy officer on oceans and coasts for the Hamburg, Germany-based World Future Council.

Sharks are considered a keystone species in maintaining the marine food web. They eat the sick and weak, and scavenge on the dead. With too few sharks, coral reefs, lagoons and other parts of the ocean degrade, scientists have learned.

The people of Palau recognise the importance of sharks to the health of their ocean territory. And they now know they make far money from shark tourism than shark fishing, Grover told IPS from Hyderabad.

Catching 100 reef sharks would bring the Palau government a one-time benefit amounting to 10,800 dollars, a recent Australian report has shown. Those same 100 reef sharks now visited by tourists nets 18 million dollars on an annual basis, according to the report, “Wanted Dead or Alive? The relative value of reef sharks as a fishery and an ecotourism asset in Palau”. Reef sharks live 10 to 25 years.

“Palau is showing that sharks are worth a lot more alive than dead,” Grover said.

Patrolling this vast haven is huge challenge for a very small country, acknowledged Heather Ketebengang, a youth from Palau in Hyderbad as a member of the International Youth Forum Go4BioDiv.

“We only have one patrol boat. Japan has just given us another. We don’t have the resources. It would be great to have assistance from other countries,” Ketebengang told IPS.

Shark finning has been a big problem for a long time. “Even before the sanctuary, when we used to catch an illegal fishing vessel it was full of shark fins,” she said. “We’d burn the fins and fine them.”

Palauans weren’t aware of the illegal shark finning that was happening and now understand the importance of sharks in the marine foodweb and want to protect sharks, she said.

Residents are responsible for managing and enforcing restrictions on the 35 protected local reefs and lagoons under the 2003 Protected Areas Network Act. Palau has a goal of protecting 30 percent of the near-shore marine environment and 20 percent of the terrestrial environment by 2020. Local communities and states manage these in the traditional fashion, but with added financial, technical and institutional support from the government.

“Restricting or banning fishing was difficult at first, but people now understand it’s for our future. It’s the only way to keep the fish there,” said Ketebengang. “Our policies will be good for my grandchildren. Fish are very important in Palau.”

Namibia received a silver award from the World Future Council for its Marine Resources Act of 2000. Namibia inherited heavily over-exploited, unregulated fisheries when it gained independence in 1990. Access to the fisheries is now fully controlled and heavily monitored at sea and in the harbours.

The act strengthened the legislative mandate of the municipal authorities and NGOs that managed the park. The reefs are in excellent condition, particularly when compared with neighbouring sites. The local communities are the primary beneficiaries, with the reef acting as a nursery site for fish and supporting local artisanal fisheries, the World Future Council judges concluded.

The Tubbataha Reefs Natural Park Act has been hailed as a model of coral reef conservation, and already similar legislation has been enacted in the neighbouring Apo Reef.

“National policies have to consider the needs of local communities and incorporate their traditional knowledge of the ecosystems and the natural resources these communities depend on,” said World Future Council councillor Pauline Tangiora, a Maori elder from Aotearoa (New Zealand).