RIO DE JANEIRO, Nov 7 2012 (IPS) - Regarded by the mainstream media and opposition in Brazil as a landmark case in the fight against corruption, the Supreme Court trial of politicians and business leaders could have an exemplary effect if the justice system applies the same standard in other, less visible, cases.

The “mensalão”, or large monthly payment case, an alleged scheme to divert public funds to pay for favours from legislators and finance political campaigns, opened in August, in the midst of the campaign for the municipal elections, and was broadcast live on TV, which drew suspicion from the start.

“Isn’t timing the trial to coincide with the municipal elections a way of playing politics, that offers a powerful weapon to one side?” asked Brazilian theologian Leonardo Boff in a column titled “Original Crisis, Mensalão and the Supreme Court”.

Like other observers, Boff – a prominent exponent of liberation theology, a Catholic school of thought that took shape in Latin America in the 1960s to defend the oppressed and the poor – did not question the need to convict those who committed crimes for which there was “irrefutable proof.” 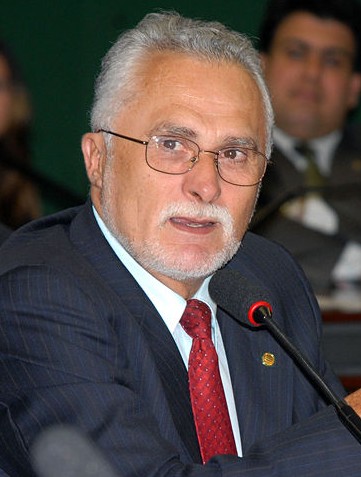 José Genoino, one of the former leaders of the PT found guilty in the “mensalão” trial. Credit: CC BY 2.5

“The law is the same for everyone,” said Boff, a former supporter of the governing left-wing Workers Party (PT), which he said always “fought for ethics in politics” but is now affected “by a wound which will bleed for a long time.”

The PT’s alleged hidden cash box is supposed to have operated during the first years of the government of former president Luiz Inácio Lula da Silva (2003-2011), from 2003 to 2005, until the scandal broke out. However, Lula himself is not implicated.

Some 25 politicians, business people and bankers have already been convicted by the Supreme Court, including historic leaders of the PT, like its former president José Genoino, and Lula’s former chief of staff, José Dirceu, both former guerrillas who fought the 1964-1985 military dictatorship and, as activists, were committed to the PT’s strong ethical principles.

Following a recess, the Supreme Court resumed deliberations on Wednesday. For defendants like Dirceu – who regards himself as “a political prisoner (tried by) a special court” – long sentences are expected.

It is indeed a political trial, but not by a “special court” and not held under a scheme born of “supposed alliances between the judges and the opposition,” said analyst Andrei Koerner, a professor in the political science department at the University of Campinas.
In recent years progress has been made in Brazil’s criminal legislation to crack down on money laundering, white collar crime and organised crime, and to require a clean criminal record for candidates to public office, he told IPS.

A civic movement for ethics in politics and responsible voting and for combating corruption is also flourishing and is demanding legal instruments for political change.

But Koerner is afraid that this trial, which has ignored “the political dimension of the actions of individuals, taking into account only the criminal aspects, will set a troubling precedent.”

“There is a risk of destabilising the entire party system, as happened in Italy; and the loss of legitimacy among politicians opens the door to adventurers who make use of the ethical sentiments of the public,” he said.

Koerner is also concerned that the Supreme Court may not have the institutional capacity “to handle with equal rigour the rest of the corruption trials in progress,” because of the heavy case load, delays in the trials and exhaustion of the judges.

One case on the Supreme Court’s calendar involves a scheme similar to the mensalão, for illegal financing of election campaigns. It implicates the opposition Brazilian Social Democratic Party of former president Fernando Henrique Cardoso (1995-2003), which is thought to have used the same financial and operational channels as the PT.

“The risk is that the judicial rigour of this case is not repeated in analogous cases, sending the message to the public and to politicians that the court was biased. In this event, the trial would be frustrating,” Koerner said.

The rule of law can be consolidated if legal rules are applied to all participants in the political system, not just the poorest and those who face discrimination, he said.

In the view of João Feres Junior, of the Institute of Social and Political Studies, the Supreme Court case “did not put corruption on trial,” but rather “had an electoral nature.” However, in the October elections it did not appear to negatively affect the PT, which made a strong showing.

The analyst expressed doubts that the trial would have consequences for the country’s political institutions. “I think it’s right to punish those who have committed crimes, but not only members of the PT,” he told IPS.

He questioned the comments of some judges who were “contemptuous of the political system,” saying “they have no right to make statements about party alliances as if they were something immoral.”

The distrust arises from other corruption trials heard by the Supreme Court, in which persons accused of similar charges were absolved. In the mensalão trial, the defence lawyers of the PT members complained of a lack of evidence against their clients.

While the Supreme Court convicted Dirceu, Genoino, and former PT treasurer Delúbio Soares for criminal association and bribery, in 2008 it granted habeas corpus to banker Daniel Dantas and nine other people in the custody of the federal police, journalist Cynara Menezes pointed out in a column published in the magazine Carta Capital.

“You cannot broadcast on television a ceremonious announcement of the conviction and prison sentences of powerful people, and at the same time, in the dark of the night, release others,” said Menezes.

Calling this “the trial of the century” is merely a “journalistic title” that is “politically irrelevant,” said Alexandre Cardoso, an analyst.

However, it cannot be denied that as a result of this trial, some people “may think twice before becoming corrupt, in order not to end up in prison,” Cardoso told IPS. But it will not have major effects, he said.

“Although the conservative media have given it a great deal of attention and are broadcasting it live, ordinary people are more concerned about how they will meet the payments on the cars they have bought,” he concluded.