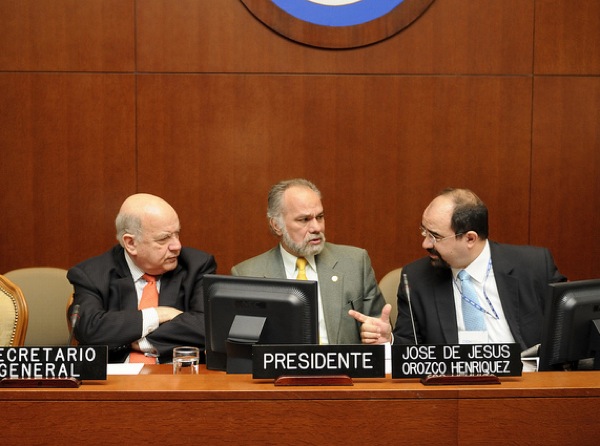 WASHINGTON, Nov 1 2012 (IPS) - Representatives of nearly 40 civil society organisations from throughout the Americas gathered here on Wednesday to express concerns with proposed changes to the Inter-American Commission on Human Rights (IACHR).

The governments of Ecuador, Venezuela, Bolivia, Nicaragua, as well as Brazil and Peru, have increasingly been attempting to distance themselves from the diktats of the pan-regional IACHR, which since its creation in 1959 has proven to be one of the most effective parts of the often-derided system of the 35-member Organisation of American States (OAS) system.

While criticism of the IACHR from those governments culminated in particularly strong rhetoric at the OAS General Assembly in June, Venezuela took a major step when it formally announced in September that it would be leaving the inter-American system.

“It is critical to have a strong institution that fully complies with the promotion and protection of fundamental rights, and which constantly ensures that countries respect these rights. This is now being threatened,” Mauricio Alarcón, with Fundamedios, a Quito-based group focused on freedom of expression, said in Spanish-language testimony at the Washington headquarters OAS.

“There are those who say that violation of rights is a thing of the past. But of course this still exists, and today more than ever we need a strong, active system – one that thinks of victims and is not subject to the state.”

The Venezuela announcement was a serious strike at the vision of a universal rights system covering the Americas. U.N. High Commissioner for Human Rights Navi Pillai immediately moved to “strongly urge” Caracas to reconsider, warning on Sep. 11 that “a vital layer of human rights protection for Venezuelans – and potentially for other Latin Americans as well – will be stripped away if this decision is carried out.”

The withdrawal also comes as a broader attempt to “reform” the IACHR system is being pushed by Venezuela, Bolivia, Colombia and others.

In January, sensing mounting pushback, OAS Secretary-General José Miguel Insulza agreed to endorse proposals for procedural changes within the commission. Critics say these changes would make it more difficult for victims of human rights abuses to access the inter-American system, and more difficult for the IACHR to enforce its own writ.

The commission’s important documentation process would also be hindered by the proposed changes, potentially allowing member countries to hold up publication of critical reports for up to a year and eliminating a section of the IACHR annual report that highlights flagrant rights abuses.

“We are extremely concerned that the reforms process that has been put forward by the OAS political members could end up weakening the Inter-American Commission and its ability to protect human rights in this hemisphere,” Viviana Krsticevic, executive director of the Centre for Justice and International Law (CEJIL), a Washington-based organisation that recently mounted an information campaign on the inter-American reforms process, told IPS.

The IACHR “has made very significant contributions in our imperfect democracies, and we are sincerely worried that some of the proposals by the states could be very detrimental for the protection of individual rights and also for the agenda of strengthening our democratic institutions”, Krsticevic added.

So far, the IACHR has refused to follow these non-binding recommendations, leading instead to Wednesday’s hearings, part of a process that is set to stretch into the spring. But if the reforms are not enacted, Bolivia, Ecuador and Bolivia say they will follow Venezuela’s lead.

While many at Wednesday’s testimony said it is critical that the inter-American system remains pan-regional, others suggest the reforms pose a far greater danger.

“Given the commission’s record of achievement, even if more governments go the way of Venezuela, the commission is not at risk of losing its relevance in the countries that continue to participate in the inter-American system,” Lisa Reinsberg, executive director of the International Justice Resource Center (which has a wealth of related information here), told IPS.

“If the proposed reforms are imposed on the commission, however, there is a serious risk of it becoming a diminished, constrained version of itself, less able to meaningfully address the pressing human rights concerns of the day.”

The IACHR is made up of seven commissioners. As a supranational body, it is empowered to hear petitions at a court in Costa Rica when national systems are incapable or unwilling to offer justice for alleged human rights violations.

Over the past five and a half decades, the commission’s work has proven instrumental in pushing regional issues related to accountability, military jurisdiction and equality, and in documenting gross abuse.

“Systems for victims of human rights violations are just like hospitals for people who are sick – if you stop the emergency room from functioning, you would be cutting the powers of the system,” Gustavo Gallón Giraldo, with the Colombian Commission of Jurists, said at the OAS Wednesday.

“Proposals by the [OAS] member states … have to be aimed at strengthening the system. Yet this morning we’ve heard of initiatives that would do the opposite – that would weaken the system. This cannot be tolerated.”

The IACHR is expected to continue to discuss reforms-related issues for the next few weeks. According to the deadline set by the OAS General Assembly in June, full and final discussion on the process is expected by March.

And while several observers have suggested that the OAS has indeed broadened the scope of its dialogue with various stakeholders since June, anxieties persist that in-country discussions are taking place neither broadly nor openly.

“Brazilians know very little about the reforms process of such an important institution,” Alexandre de Oliveira Andrade Moraes, with the freedom of expression-focused group Article 19, told the IACHR on Wednesday. “Closed-door talks with the foreign minister…should never be considered substitution for the transparency Brazil owes its people.”

CEJIL’s Krsticevic is similarly calling for “a transparent, open discussion at the level of the political organs” in upcoming months. “This is key if we’re talking about a system that covers everybody – this can’t be only about governments.”