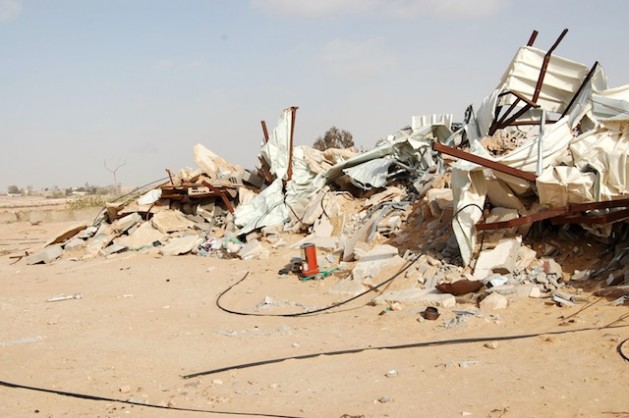 A home recently demolished in the village of Bir Hadaj, part of the Abu Basma regional council. Credit: Jillian Kestler-D’Amours/IPS

BEERSHEBA, Israel, Dec 22 2012 (IPS) - As campaign posters pop up around Israel ahead of the country’s upcoming parliamentary elections, Bedouin citizens of the state are still reeling after being denied the chance to elect their own local council representatives.

Legal rights activists say the move represents the limits of democracy in Israel, particularly with regard to its non-Jewish citizens.

“Every citizen wants to have a say in the affairs of their lives. This is their legal right,” Jazi Abu Kaf, a local leader in Um Batin, a Bedouin village of some 4,000 residents in Israel’s southern Negev desert region, told IPS.

“The authorities don’t want to allow elections or see leaders (emerge) from among the local people.” The current head of the council is not from the villages, making locals feel alienated from the local government.

Um Batin is one of 11 Bedouin communities in the Negev that make up the Abu Basma regional council. Formed in 2004, the council is the newest, and one of only three, non-Jewish local councils in Israel.

As of 2011, 53 regional councils governed approximately 850 rural towns and villages in Israel. Made up of elected representatives from communities within each council’s jurisdiction, regional councils help distribute local budgets, provide services to residents, and liaise with various government bodies.

While it now represents approximately 30,000 Bedouin citizens of Israel, the Abu Basma regional council is still run by an Israeli government-appointed representative, and Israel has repeatedly delayed elections to appoint representatives from among the local people.

In 2011, after local human rights groups appealed the amendment, the Israeli Supreme Court ordered the state to hold elections in December 2012 for the Abu Basma villages.

But only a few months before the elections were set to take place, a special committee created by the Interior Ministry suggested splitting the Abu Basma regional council into two new councils: Al Kasum and Neve Midbar.

In its justification of the split, the state argued that the residents of Abu Basma were not ready to hold elections, and the council didn’t cover a contiguous territory.

“Even if they had reasonable arguments, the timing of appointing such a committee – a few months before the elections were supposed to take place – indicates that their purpose was to avoid the Supreme Court verdict and to split the council,” said Rawia Abu Rabia, an attorney with the Association for Civil Rights in Israel (ACRI), which represents the villagers in their efforts to hold elections.

“(Bedouin) are excluded from democratic processes that (their) Jewish neighbours are not. People feel more alienated from the state authority. They feel a lack of trust.  It’s also weakening leadership within the Bedouin society,” Abu Rabia told IPS, explaining that without elections, local Bedouin leaders feel powerless to positively impact their communities.

There are approximately 200,000 Bedouin citizens of Israel living in the Negev area. In addition to the Abu Basma council villages, more than 60,000 Bedouin live in about 35 ‘unrecognised’ Bedouin villages in the Negev, while about 100,000 live in state-built Bedouin townships.

Virtually all the Bedouin communities in the Negev – whether recognised, or not – suffer from a widespread lack of services, high unemployment, and abject poverty. The government-planned Bedouin towns, for instance, annually fall into the lowest socio-economic bracket in Israel.

A government proposal passed in 2011, known as the Prawer Plan, also aims to uproot at least 30,000 citizens from their homes in unrecognised villages and relocate them to the townships. The government justifies this move as a way to modernize the Bedouin community and provide it with better services.

Bedouin citizens of the Negev, however, have flatly rejected the Prawer Plan as an affront to their basic rights.

“This policy sees the Bedouin not as citizens, but rather as the enemy or a demographic threat. In order to be able to implement the government policies that the Bedouin are opposing, the Israeli government is re-organising the space in different ways, through planning, land use and local municipalities,” Abu Rabia said.

According to Jazi Abu Kaf, denying thousands of Bedouin citizens the right to elect their own leaders only adds to a sense of dispossession growing within the community.

“Nine years after the (Abu Basma regional) council was established, the situation in the villages is no different than before. The council didn’t do anything for the villages,” said Abu Kaf, adding that some homes in Um Batin are still without electricity, despite the village’s on-paper recognition.

“Israel is not a democratic state. There is no equality between Arabs and Jews. Young people see that they are present in this state, but don’t have their rights. They have no hope for the future.”