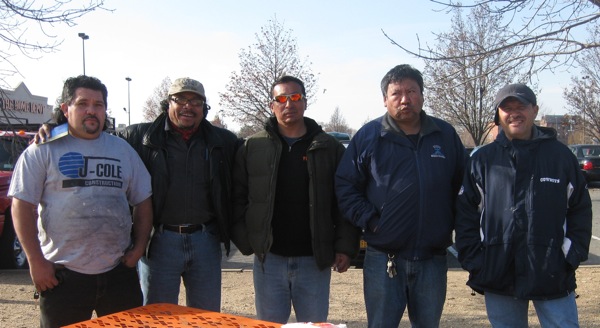 UNITED NATIONS, Dec 4 2012 (IPS) - Undocumented immigrants have played a significant role in recovery efforts since Hurricane Sandy swept the northeast United States one month ago. But despite their contributions, they have been left in the storm’s wake with little financial, legal or moral support.

But for day labourers – men and women without full-time employment, who search for temporary work to make ends meet – natural disasters such as Sandy mean opportunities for work, even if workers are unauthorised and ill-equipped for the job. These factors often lead to dangerous working conditions and exploitation.

These day workers are usually undocumented immigrants, predominantly from Latin America who, unaware of their rights, often fall victim to unscrupulous employers who not only fail to pay them but also expose them to dangerous working circumstances that leave them vulnerable injury or even death.

“After the hurricane, we mostly did cleaning jobs in hotels, at the beaches and parking lots because everything was flooded or covered in dirt and mud,” José, a 43-year-old Honduran immigrant, told IPS. José was one of the many day labourers waiting for work at a parking lot in Hempstead, Long Island.

“No one protects us here, neither our employers, nor the clients,” Ruiz, a 72-year-old Honduran, told IPS. “We are on our own. We don’t have protection but someone has to do the job. After Sandy, many labourers got sick and injured because with such natural disasters you don’t make it out without coming down with something.”

Local authorities and government agencies have emphasised the need for licensed and experienced professionals to handle the post-Sandy cleanup, but these rules are often broken amidst chaos and disaster. Because of the hurricane, many contractors, homeowners and other victims hired day labourers.

“This government has lied and abandoned us! They don’t care about us. And that’s why we have to unite as one, and be a family to each other, because if they don’t care for us, who [will]?” added Ruiz.

A 52-year-old Salvadoran by the name of Lucas is one of the day labourers responsible for bringing attention to this situation. “The government should listen to us,” he said. He said that demonstrations have brought the labourers confidence. “The last one was even aired on television and got people talking about and noticing us. Finally we are not invisible anymore,” he added.

Describing post-Sandy in Long Island as a “war zone”, day labourer Francisco, 46, fled from his native country of El Salvador because of the civil war. After travelling on foot and by train and bus, he eventually wound up in New York, searching for work. “I’ve travelled a long and dangerous road to get here in hope of a better future. Instead I ended up as a day labourer.”

Calls for more safety and protection

As the number of day labourers has risen, so have centres that pursue better working conditions for them. Among these organisations are the Workers Justice Project (WJP), the NDLON and El Centro del Inmigrante (ECDI).

These centres aim to achieve economic and social empowerment through education, leadership development and counselling. In order to reduce labourers’ chances of being exploited, they also teach them about their rights and the laws that support them.

“We are always fighting for our lives while doing this work and there is so much insecurity every day, whether we will have work or not, because we depend on patrones [employers] who come…to offer us work,” Carlos, 50, from El Salvador told IPS.

Jorge, a 52-year-old Honduran, highlighted the problem that all day labourers face: “Most patrones are abusers. They hire us to work for them but refuse to pay us. We have no right to file a complaint because we are undocumented immigrants.”

Hurricane Sandy has made it more difficult for these centres to assist and counsel day labourers on their quest for work in hard-hit areas of New York.

“Our centre in Brooklyn was unfortunately badly damaged by the flooding,” said Ligia Guallpa, director of the WJP, during a press telebriefing. “Basically we’re left without a centre.” She expressed concerns over the day labourers who are currently working on the reconstruction of particularly battered areas like Coney Island and Sea Gate.

“Now, more than ever there is a need for these day labourers,” Guallpa emphasised. “Many of these workers are now being picked off the street instead of coming to the centre first, which means that they are being exposed to all kinds of violations.”

Guallpa called the entire situation “very unfortunate”, estimating that more than 10,000 day labourers are helping to reconstruct parts of New York and New Jersey in the aftermath of Hurricane Sandy.

Guallpa added that having the centre operate again would be critical so that “the labourers can help rebuild the communities with proper equipment, training resources and assistance”.

Nadia Marina Molina, programme coordinator at the NDLON, agreed with this, pointing out that day workers need not only sufficient information but also proper equipment, which employers often don’t provide. In this spirit, her group has developed a “health and safety material series…for workers and organisations who want to distribute them”.

Located on the north shore of Staten Island, El Centro del Inmigrante (ECDI) had a little more luck than WJP and was not affected by the storm. As a result, they could start on recovery efforts immediately.

“Already twenty families came to our centre for work […] of which most stayed with friends and family because they had to evacuate their homes,” explained Gonzalo Mercado, executive director at ECDI, during the telebriefing.

So far, neither of the centres experienced any type of immigration enforcement actions against illegal and undocumented immigrants, identity checking procedures, arrests or deportation.

Guallpa hoped that none of these actions would come soon, and with good reason. “A lot of day labourers are actually members of the community,” she emphasised, “who live and work here and work hard to rebuild”.