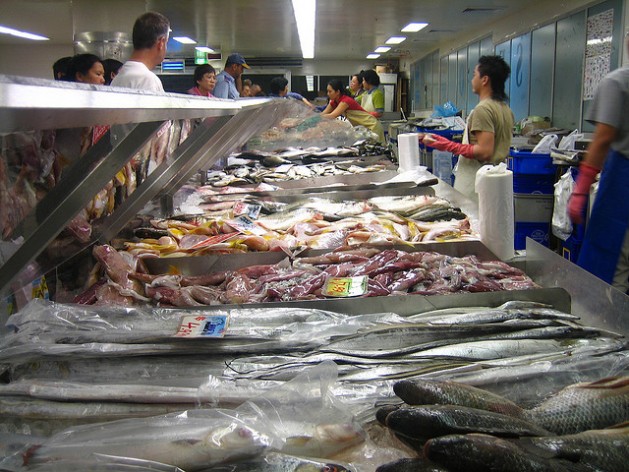 In one recent study, 84 percent of fish sampled at sites located near potential mercury contamination were not safe for consumption for more than one meal per month. Credit: Jeremy Keith/cc by 2.0

WASHINGTON, Jan 10 2013 (IPS) - Even as government negotiators from around the world prepare to gather next week for a final round of talks on a new international treaty limiting the use of mercury, scientists and activists are warning that the draft treaty is both too weak and too limited in scope to have a major impact.

“Based on what’s happened so far, based on the draft text, we have strong doubts that the treaty will actually be sufficient to reduce global levels of mercury in fish and seafood,” Joe DiGangi, a science and policy advisor for IPEN, an anti-toxics network, told IPS from Geneva, where negotiations will take place Jan. 13-18.

“You have a disconnect between the severity of the problem and the political will in the actual details of the treaty,” he said.

While most industrialised countries have reduced their use of mercury in recent decades, developing countries have seen a steep rise in the toxic metal’s use, primarily from the burning of coal and as an important agent in small-scale gold mining.

Mercury, which can remain in natural environments for years, attacks the nervous system and has been proven to be particularly debilitating for unborn babies and children.

According to a new report released Thursday by the United Nations Environment Programme (UNEP), since 2005 mercury emissions have doubled in small-scale mining operations in Africa, Asia and South America. Today, Southeast and East Asia alone account for around half of global mercury emissions, put down to the regions’ rapid economic growth in recent years.

“The burden of disease in many ways is shifting towards developing countries,” Achim Steiner, the UNEP executive director, wrote in introducing the new study.

Noting that the report “speaks directly to governments involved in the development of the global treaty on mercury”, he reminds negotiators that the World Health Organisation “has concluded there are no safe limits in respect to mercury”.

Under the auspices of the UNEP, next week over 100 countries will meet in Geneva for a fifth and final round of discussion toward an agreement that would offer a variety of guidance on mercury use, as well as aim to reduce demand for the metal by 2015.

Yet according to some observers, the negotiations and drafts that have emerged from this process have become so watered down that the overall treaty risks becoming largely ineffectual, lacking the holistic vision needed.

For instance, IPEN’s DiGangi says, while the draft treaty acknowledges that small-scale gold mining is one of the largest sources of mercury contamination, it also makes cleaning up contaminated sites completely voluntary.

Likewise, while “vague” requirements may be set for airborne mercury at coal-fired power plants, the treaty has nothing to say about the thousands of new coal plants currently being planned for construction around the world.

DiGangi was a lead scientist on a recent international study that studied mercury levels in fish and human hair at sites located near potential mercury contamination. He says that the results, which were released on Wednesday, “were a surprise to all of us because the levels found were so high in so many developing countries.”

For instance, 84 percent of fish sampled were not safe for consumption for more than one meal per month, under U.S. regulation. Likewise, more than 82 percent of the people studied contained mercury exceeding current health advisory levels.

“That’s serious – that’s the sort of problem that calls for an ambitious and robust response,” DiGangi says. “In many developing countries, even if they have rules on mercury use, enforcement is a common problem, as is simple information on these hazards. For many of these communities, this was the first time that fish and humans were examined.”

After the results came out, he adds, many of those who had been tested were surprised – and “many wanted the sources to be addressed in rigorous way.”

Despite the undisputed international consensus on the hazards of mercury to human health, negotiations towards the new treaty have focused on environmental rather than health concerns.

“Initially, there was virtually nothing on health, though there’s been some advances, particularly because the Latin American and some African countries have advocated for a stronger section on health and a more explicit focus on health rights,” Joseph Amon, a U.S.-based health researcher with Human Rights Watch, a watchdog, told IPS.

“This could have been a simple oversight, or it could be a way to avoid some responsibility. Traditional donor governments have been resistant to explicit language around health because of reduced budgets in international health, while other countries have been resistant because they have significant gold-mining operations.”

Amon particularly highlights the United States, European Union and Canada for having taken regressive stances on the explicit incorporation of health concerns into the draft negotiations, including having rejected a separate section on health in the new treaty during the last round of talks, in 2012.

“These are countries that support global health generally, so the restrictive arguments that are being put forth by these three just don’t hold up,” he says.

Frustration over the treaty’s tepidness has even impacted on decisions on what any eventual agreement should be named. Originally, it was to be dubbed the Minamata Convention, after the Japanese city that, during the 1950s, was the scene of one of the world’s worst mercury poisonings, killing 1,700 people and impacting on many more.

“This treaty needs to do three things: honour the Minamata victims, prevent future Minamata-type disasters, and ensure a good response to any such incident in the future,” DiGangi says.

“Because the new treaty does not look to be sufficiently robust to justify this name, we are advocating for a different name – as are citizen groups of survivors of Minamata and the Minamata city council.”