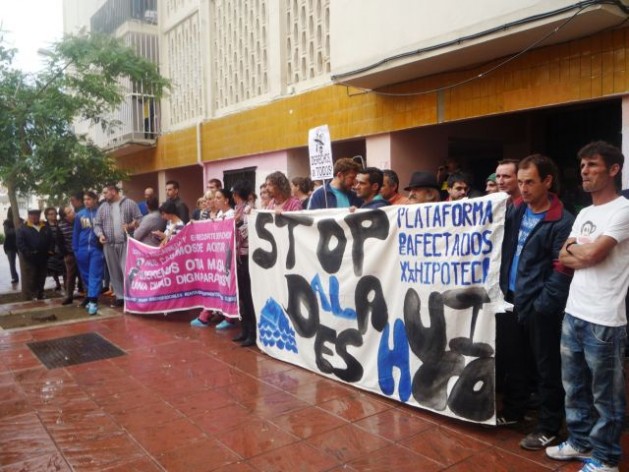 The ILP calls for “payment in kind", meaning that a person’s debts are written off once they have surrendered their home. Credit: Inés Benítez

MALAGA, Spain, Feb 15 2013 (IPS) - Public outcry against evictions this week led Spain’s parliament to accept a popular initiative against mortgage-related evictions for unpaid debts, which in the past seven days have led to four suicides.

“The banks chase me to pay every cent,” while they are rescued with public money, complained Benigno, a 47-year old unemployed man, who with his three children has for nearly a year occupied one of 29 vacant apartments in a building project in the southern city of Malaga, which closed down when the developer went bankrupt.

Benigno has had two houses foreclosed on. He spent three years working for a company with an open-ended contract when he decided to take out a loan to buy a bigger second home, offering the first as collateral.

The Popular Legislative Initiative (ILP), promoted by the citizen movement Plataforma de Afectados por la Hipoteca (PAH) (Platform for those Affected by Mortgage), is backed by nearly a million-and-a-half signatures.

It calls for “payment in kind,” meaning that a person’s debts are written off once they have surrendered their home, and wants this to apply retroactively. It also wants a moratorium on evictions, and the creation of social housing with homes confiscated by banks.

“We are the European country with the most evictions, and at the same time the one with the largest millions of accumulated empty homes,” PAH spokesman, Ada Colau, said in a televised interview earlier this month.

Between 2007 and the third quarter of 2012, there were 400,000 foreclosures in Spain, according to data from the General Council of the Judiciary.

“I heard that there were empty houses and I came. I had no other choice. I could not pay rent,” said Antonio, a 22-year-old living with his wife Encarni, 19, and their two-year-old daughter. The little he earns as a street vendor, he spends on food.

“I have no electricity and water, but at least I don’t have my daughter on the street,” said Antonio, who is a neighbor of Benigno and 20 other families, who make up for the lack of electricity with candles and generators, and fill containers with drinking water from nearby pumps.

The debate over the ILP, which given the social pressure was accepted “in extremis” by the ruling right-wing Popular Party (PP) with a parliamentary majority, “is a first step”, said Antonio Alarcón, a core activist of the Malaga PAH, which in four years has stopped more than 500 evictions. It negotiates payments in kind and relocates families into affordable rental schemes.

It remains to be seen whether the measures proposed in the ILP will be incorporated unchanged into a bill on the same subject which is already passing through the parliament.

If by law the banks apply payment in kind retroactively, many people who have lost their homes would avoid facing lifelong debts. “They will save me from a 28-year trap,” said Benigno.

Some in economic circles oppose payment in kind, arguing it will make credit more expensive and hurt the financial system.

“But the fact is that today there is no credit for anyone and the financial system is already broken,” Sara Vásquez, an attorney for the PAH in Malaga, told IPS.

For Vásquez, the admission of the ILP project was the result of “arm-twisting ” and “marks a milestone in this country”. It shows that “the only way out is pressure” by of citizens, who increasingly feel less represented by institutions, and are outraged by the corruption charges shaking the PP and members of the royal family.

In the past four months there have been seven suicides of people who were to be evicted, including four in just the last seven days. On Feb. 13, the judicial commission that was to carry out the eviction of a man found him hanging at his home in the southeastern city of Alicante.

Unemployment is now affecting a whopping 26.2 percent of the workforce in Spain, even as there are drastic cuts in key areas such as health and education.

“(The government) is not rescuing people, but the banks,” said Alarcon, referring to public money allocated to clean up the financial institutions and the creation of a so-called “bad bank”, a manager of unpaid property loans or unsold homes that the banks took from bankrupt construction companies to whom they had lent money.

During the housing boom, “everything in this country was pushing you to buy a home instead of renting… and the banks themselves drafted the mortgage contracts,” Colau recalled in the interview.

The PAH has called for demonstrations this Saturday “for the right to housing and against financial genocide”.

The Court of Justice of the European Union declared last November that the Spanish foreclosure system is incompatible with the laws of the EU bloc.

In a preliminary ruling, which will serve as a basis for judgment, the court granted national judges the power to suspend evictions until the terms of credit have been reviewed to see whether or not they are abusive.

The debtors come to the PAH with “complete ignorance” about their situation: they don’t know how to negotiate with the bank or how their lawyer can help them, said Alarcon, who criticised the lack of training of lawyers in charge of defending the interests of those affected.

“None of us live here today because we want to,” said Benigno. With the help of the PAH, they want to negotiate with the owner and continue to stay in the building, in exchange for its maintenance, for which each of them provides 20 euros per month, according to a list attached to an elevator that never functioned.