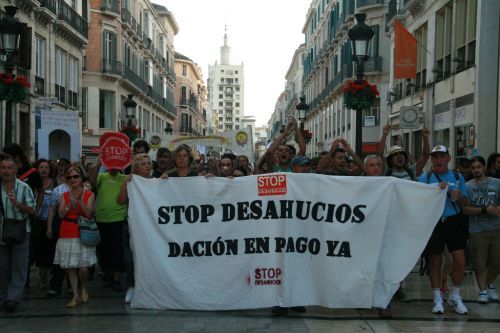 MÁLAGA, Spain , Oct 25 2012 (IPS) - Shouting slogans against bank foreclosures, dozens of protesters in this southern Spanish city gathered Wednesday to prevent the eviction of a Moroccan family who couldn’t afford to meet their mortgage payments.

“I lost my construction job and I have two small children,” the head of this immigrant family, who gave his name as Mohammed, told IPS outside the house he began making payments on in 2007 in the Málaga neighbourhood of La Palma.

About a hundred neighbours and members of the Platform of People Affected by Mortgages (PAH) gathered for hours in front of Mohammed’s family home, in spite of Wednesday’s heavy rain, to keep out the justice system authorities in charge of the foreclosure.

Thousands of immigrant and Spanish families are in the same situation as a result of the severe economic crisis, which has driven up unemployment to the highest level in Europe, depressed wages, and prompted a raft of austerity measures introduced by the government of Prime Minister Mariano Rajoy of the rightwing People’s Party.

A total of 29,275 evictions were carried out between April and June – a record for this country, according to a report on the impact of the crisis on the judicial branch, published Sept. 2 by the General Council of the Judiciary.

The official figures indicate that the Spanish justice system foreclosed on 271,570 homes because of default on mortgage payments between 2007, when the crisis began, and 2010.

“This is a very harsh war,” Antonio Alarcón, an activist with the Málaga PAH, told IPS. He said Spain “is in a state of housing emergency, with many families living in dreadful conditions in garages, garrets and shacks,” while others face imminent eviction.

But at the same time, there are over five million vacant dwellings, equivalent to 20 percent of the country’s housing stock, according to housing experts. The National Institute of Statistics recorded 3.1 million uninhabited housing units in 2001, but will only update its figures in early 2013.

According to the newspaper El País, the General Council of the Judiciary this month studied a report by six magistrates which accused banks of “malpractice” for granting mortgages “without evaluating the borrower’s real ability to pay,” demanded a moratorium on mortgage payments, and called for government bank bailout funds to be extended to the financial institutions’ indebted clients.

The growth of unemployment, which has reached 24.6 percent, has caused growing numbers of mortgage-holders to default on their payments and to be evicted. And in spite of being on the street, they are still liable to the banks for the outstanding debt.

“Where will they go with their children? We need a solution, a job so that we can pay,” a female relative of Mohammed’s wife told IPS on the brink of tears, while her husband, Abdesselan, complained that they were deceived because they took out a mortgage for 117,000 euros (151,758 dollars) when the title deed states the value of the apartment is only 70,000 euros (116,754 dollars).

“Let’s form a human chain of passive, peaceful resistance. We’re here to protect a home and a family. We are human beings,” Sara Vázquez, a Málaga PAH spokeswoman, exhorted the neighbours shortly before the time set for the eviction, which in the end was suspended without a new date set, IPS was told.

“It is the neighbours who are stopping the evictions,” said Alarcón, who complained about the lack of effectiveness of the foreclosure mediation programme launched by the government in recent months, whose offices have not been able to solve cases like that of Mohammed’s family.

PAH lawyer José Cosín told IPS that foreclosures can be stopped or delayed by means of “frontal and physical” opposition by civil society, organised in groups like the May 15 Movement (15M), which arose from spontaneous mass demonstrations in the central squares of Spain’s large cities on that date in 2011.

PAH, formed in Barcelona in 1994 as an association of people affected by mortgage debt, has joined with other social organisations and with trade unions to promote a so-called Popular Legislative Initiative, which would make it possible for mortgage-holders to give up a house in full payment for the debt, request a moratorium on mortgages and convert them to affordable rents.

The Rajoy administration will face its second general strike in protest against the cuts in less than a year of government on Nov. 14. In February it announced a “code of good practice” on giving up houses in full payment – known as “dación en pago” – that was merely a declaration of intent and not binding on the banks.

The proposal, according to Cosín, “was not worth the paper it was written on,” as it left it up to the banks to accept or not the return of the houses, or to negotiate affordable rent payments.

“Our weapons (against evictions) are our voices and our hands,” one of Mohammed’s neighbours shouted through a loudspeaker, surrounded by signs reading “Indignation” and “Can’t Pay, Not Won’t Pay.”

In late 2010 there were 687,523 new housing units in Spain that lacked buyers, according to a July 2011 report by the Ministry of Public Works. Meanwhile, evictions are growing exponentially.

Cosín believes solutions exist, and he gave the example of Miguel, an unemployed bricklayer who was squatting in a decrepit house in Málaga, but signed an agreement on Oct. 12 with José, the owner, which allows him to live in the house temporarily in return for renovating it so it can be sold.

“This is a solution in a society where there are millions of empty houses that are depreciating and thousands of people without a home,” said Cosín, who proposed the formula that suited both parties when he received José’s lawsuit against Miguel.

José will receive a pre-arranged sum of money when the house is sold, and the difference between this amount and the final value will be used to buy another dilapidated house for restoration, said Cosín, who is also a 15M activist.

A bill on Urban Rents before the Spanish parliament includes a contract on “restoration in lieu of rent,” regulating the opportunity for the tenant to restore the property instead of paying rent.

Governments should promote alternatives to housing policy based on credit and property, among other things by means of developing a private rental sector, Raquel Rolnik, United Nations Special Rapporteur for the right to adequate housing, said in a report presented to the U.N. General Assembly.