Euribor Under Scrutiny by People’s Campaign in Spain

MÁLAGA, Spain, Mar 12 2012 (IPS) - Two Spanish lawyers have launched a campaign on social networking sites to prise out information about Euribor, the reference interest rate used for calculating mortgage payments in Spain, and to draw attention to the lack of transparency surrounding the way the rate is set. 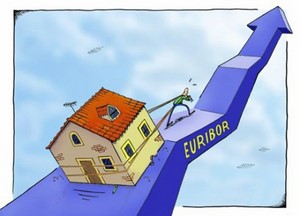 “We designed this campaign because we suspect we may be experiencing a swindle of colossal dimensions,” Francisco Jurado, a lawyer and a member of Real Democracy Now (DRY), the platform that gave rise to Spain’s 15-M protest movement on May 15, 2011, told IPS.

Euribor, which stands for Euro Interbank Offered Rate, has existed since 1999 and is a benchmark index based on the average interest rate at which financial institutions lend each other money on the euro wholesale money market, for periods varying from one day to one year.

A panel of 44 large banks, mostly European, contributes data from which Euribor is calculated. In Spain, where the majority of mortgages are taken out at variable interest rates, the one-year Euribor has commonly been used as the benchmark rate for mortgage loans since Jan. 1, 2000.

Fluctuations in Euribor therefore affect the lives of millions of people.

The #opeuribor campaign fuse was lit when Juan Ignacio Moreno, another lawyer and also a member of DRY, chanced upon the case of a client who had failed to pay the bank three 600-euro monthly mortgage payments in 1997. After a lapse of 13 years without claiming the payments, in 2010 the bank sent him a bill for 22,000 euros.

Moreno wondered how the accumulated interest was calculated, and whether Euribor was easily manipulated. He began to hunt for answers to these questions in the institutions involved, from high street banks to the European Banking Federation (EBF) and Thomson Reuters, and found possible irregularities and a lack of transparency.

Thomson Reuters, a business data provider created in 2008 when the news agency Reuters was purchased by the Thomson Corporation of Canada, undertakes the daily compilation of data from the 44 panel banks, carries out the calculations and publishes the Euribor figure.

Thomson Reuters asked the Spanish lawyers for a warrant in order to reveal the data used to calculate Euribor rates for April and May 2011.

Jurado wondered why there is no public organisation to monitor and oversee the Euribor indicator, which is applied to 18 million mortgages in Spain and many other loans to individuals, companies and public bodies.

“It is unbelievable that an index which affects the lives of millions of families should be calculated by a private body in a non-transparent way,” José Cosín, a lawyer and a 15-M activist in the southern city of Málaga, told IPS.

Several experts agree that since the global economic broke out, both liquidity and the number of interbank transactions have declined considerably.

“The interbank market has dried up,” said Jurado, due to the financial crisis in Europe.

“Given the circumstances, and being aware than the interbank deposits market is a determining Euribor factor, we decided to investigate whether the necessary operations for the daily publishing of this basic reference rate were in fact occurring,” Jurado and Moreno explain on the campaign’s web site.

Cédric Quemener, the head of Euribor-EBF, told the Spanish lawyers that the index is calculated on the basis of “quotations of interest rates offered by banks,” without any real transactions on the interbank market necessarily being made.

The organisers of the campaign, with which translators, economists, lawyers and DRY activists have become involved, are highly critical of the method of calculating Euribor on the basis of “a survey” carried out among banks, instead of by “objective, non-manipulable mathematical calculations” as envisaged in Spanish legislation.

“Are interest rates and the market price of money really just determined by a survey?” activists ask on the campaign web page.

“The campaign has had an enormous impact,” Jurado said. Since its launch on the social networks Feb. 26, the web site www.opeuribor.es, available in four languages, has received over 30,000 hits from around the world, and from institutions like the European Parliament.

Miguel Ángel Fernández, the governor of Spain’s central bank (Banco de España), said in October that Euribor should be abandoned as a reference index for mortgages in Spain, so as to “reduce the dependence of our financial system on the one-year interbank interest rates.”

Banco de España receives and publishes the Euribor but does not participate in setting it.

According to Spanish law, Euribor should be a non-manipulable quantity that arises from a series of interbank transactions.

However, it has been impossible to gain access to information about these transactions, Barcelona DRY activist Klaudia Álvarez complained to IPS. “No one will show us the transactions, all the banks have put us off without an answer, and to top it all, it seems that no one has the power to demand that the data be made public,” she said.

The definition of Euribor in Spain’s legislation is “the unweighted arithmetic mean of the daily values for the business days in each month, of the spot rate published by the European Banking Federation for deposits in euros for the period of one year, calculated on the basis of spot rates offered by a sample of banks for interbank transactions.”

In October 2011, the European Commission announced an investigation into several financial institutions suspected of possible Euribor manipulation. Probes have also been conducted into alleged rigging of the rate by bank employees seeking to maximise their own trading profits.

“Information is your right. Transparency is their obligation” is the slogan of the #opeuribor campaign, which encourages citizens to ask their banks exactly how the Euribor that is applied to their loan is calculated. Their web site posts examples of sample letters and forms that can be used to request information.

“What we have been told isn’t quite right,” Álvarez said. In her view, what the lawyers have found out shows “how little transparency there is for economic data that affects us all, and that should be publicly regulated.”

Álvarez said the #opeuribor campaign is “a very timely initiative to expose, once and for all, the big swindle we are all caught up in.”