UNITED NATIONS, Mar 14 2013 (IPS) - “I believe the Alliance can become a major soft power tool to diffuse tensions and conflicts, especially those which are ethnically or identity based,” said Nassir Abdulaziz Al-Nasser, the new High Representative for the U.N. Alliance of Civilizations (UNAOC). 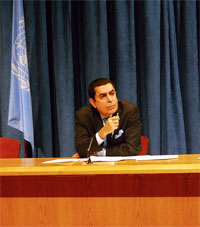 The term “soft power” was coined by Joseph S. Nye of Harvard University, and is used to describe concepts such as democracy and culture. These concepts are often more seductive than they are coercive, argues Nye, and can be used in effective ways to influence foreign policy.

“The Alliance can play a preventive role (in conflicts), using mediation as a soft power tool,” said Al-Nasser. “The Alliance will use sports, arts and music to foster (a) culture of peace.”

Al-Nasser, a former president of the U.N. General Assembly and chairman of the Board of Directors of Inter Press Service (IPS) news agency, spoke at a press briefing on Mar. 14 at U.N. headquarters.

His comments come at a time when hard power fills media headlines, from regional conflicts to hard-hitting U.N. sanctions. Al-Nasser’s press briefing was his first after the UNAOC’s Fifth Global Forum, entitled “Responsible Leadership in Diversity and Dialogue”, which took place in Vienna, from Feb. 27-28.

“From the world stage to local communities, leaders need to speak the language of tolerance and respect, not division and defamation,” said Secretary-General Ban Ki-moon in Vienna.

The two day Forum resulted in a consensus document – the Vienna Declaration – adopted by (100+) members of the UNAOC’s Group of Friends.  “This document is the first of its kind,” said Al-Nasser at U.N. headquarters. “(We) all saw the immense value that could be attached to this Declaration… as we move forward into the future.”

“Yesterday, I had a very successful meeting with (Ban),” he added. “I handed him a copy of the Vienna Declaration.” Al-Nasser also saluted Pope Francis I for his recent election as the 226th Pontiff of the Roman Catholic Church.

“I had the honour and privilege of knowing his predecessor, Pope Benedict XVI,” he said. “We pledged to work together in interfaith harmony, world peace and security.” The Pope maintains diplomatic relations with the U.N. through the Holy See, which has observer status as a non-member state.

“I pledge to do all I can in cooperation with all faith leaders, including Pope Francis I, to achieve our common goals,” said Al-Nasser. “The mission in the end is to bring peace, security and stability for the world,” he noted.