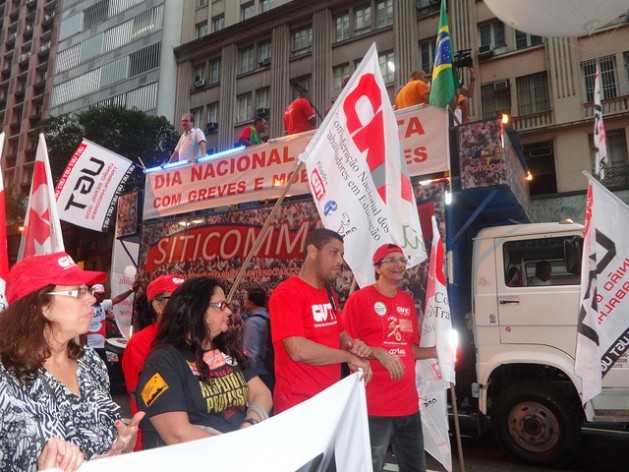 The “other march”: fancy trade union banners, flags and signs and powerful sound systems, everything highly organised to set forth the labour movement’s own demands. Credit: Fabiana Frayssinet/IPS

RIO DE JANEIRO, Jul 13 2013 (IPS) - The young people who have been protesting in Brazil over the last few weeks, who say they are apolitical and who have organised over the social networking sites, were not entirely pleased with Thursday’s demonstrations by the country’s trade unions and social and popular movements.

During a “National Day of Struggle” Thursday, strikes, protests and roadblocks were organised by the CUT central trade union and 77 urban and rural social organisations.

The demands of the new and more organised protests included better wages, a reduction of the work week to 40 hours, job security and an end to outsourcing, higher pensions, 10 percent of GDP for education, higher spending on public health, and improved public transport.

According to the organisers, 100,000 demonstrators came out on the streets nationwide.

In Rio de Janeiro, where some 10,000 people joined the march, the trade union’s flags and banners, professional-looking signs, sound systems and balloons contrasted with the hand-made placards of the students and other young people who began to take to the streets in Brazil’s cities in June.

But the student protests, initially triggered by bus fare hikes and organised over Facebook and other sites, were much bigger, reaching one million people countrywide.

Thursday’s protest “was peaceful; we’re asking for better working conditions and we’re protesting cuts in our companies,” one worker taking part in the protest, who said his name was Eduardo Henrique, told IPS.

Among the demonstrators, a group of engineers from Brazil’s Petrobras oil company called for an end to public auctions of oil industry concessions.

“We discovered enormous oil reserves, so there’s no need for foreign companies to come in,” Silvio Cidog, with the association of Petrobras engineers, told IPS.

Rural workers also made their voices heard. A small farmer who identified himself as
Osuara, with the Landless Rural Workers Movement (MST), said it was urgent for the government’s land reform programme to speed up.

Far away from the noise of the trade union’s sound systems, a group of around 200 demonstrators blocked traffic on one of the city’s main avenues with a sit-in, to draw attention to the demands that gave rise to the movement of young people who describe themselves as apolitical.

“This is a movement without party affiliations that was organised over the Internet. They (the trade unions) took advantage of us. They have sound wagons, they buy everything, they hand out flags, the people don’t have any of those things,” said Karina Monteso, an economist.

“In Brazil, there’s a dictatorship of the left…They don’t want to release their hold on power,” said lawyer Marcio Simoes. “Our only weapon is this,” he said, holding up his iPhone, which he uses to communicate with other protesters who, demonstrating in another Rio de Janeiro neighbourhood, were preparing to march to the government palace.

Around the Guanabara Palace, things got out of hand. Isolated groups of masked protesters used stones, Molotov cocktails and flares to try to knock down bars protecting the building, and clashed with police.

Their chants focused on protesting the police repression and the 2014 World Cup and 2016 Olympic Games to be hosted by Brazil.

Meanwhile, in the demonstration organised by the trade unions, urban planner Orlando dos Santos, with the NGO Observatorio de Metrópolis, was also opposed to the organisation of the two sporting events.

As a member of the non-governmental World Cup and Olympics People’s Committee, he is against the forced evictions caused by the sports-related construction projects in poor neighbourhoods.

With regard to the criticism from “the other protesters,” Dos Santos said “society is diverse. This demonstration was organised by the central trade unions, which are more classic-style organisations, and it is to be expected that there are groups that question this more traditional kind of group. But they are as democratic as the new forms of organisation,” he told IPS.

Nadine Borges, who represented a group of demonstrators from the Rio Truth Commission, called for the 1964-1985 military dictatorship’s documents to be made public so that human rights abuses committed during that period could be investigated.

“For us, historically, the defence of democracy has been based on the organisation of workers. This here is a democratic event that represents the organised central trade unions,” Borges said, in response to the criticism from other groups.

Some 100 young people dressed in black and covering their faces to avoid tear gas demonstrated in parallel to the workers’ march. “We have no words,” one of the young demonstrators told IPS. But their signs did: “Make love not war”, “Power to the people”, “Anarchist shock troops”.

Separated from the main trade union march, which filled an entire avenue, a group of young artists dressed as clowns chanted against police repression. They called themselves the “nhoque nhoque troops” – a play on words alluding to the security forces’ “tropa de choque” or “shock troops”.

Members of the governing leftwing Workers Party took part in the march organised by CUT, although without carrying party flags. After they identified themselves as party members, they said they were calling for a “deepening” of the socioeconomic improvements ushered in over the last decade by former President Luiz Inácio Lula da Silva (2003-2011) and President Dilma Rousseff.

This was the first reaction by organised leftwing political and social groups in Brazil in response to the wave of young people’s protests.

CUT, which supports organised participation by today’s young people, is worried that “conservative and rightwing sectors will try to influence their protests with objectives that have nothing to do with the immense majority of the people,” according to one of the union’s leaders.

He said “the organised participation of the working class in this new scenario is of fundamental importance, to make sure this situation has a positive solution.”