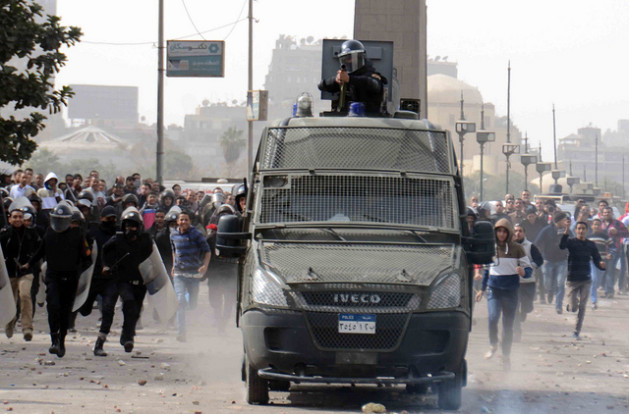 UNITED NATIONS, Jul 9 2013 (IPS) - When the dust settles from the ongoing deadly confrontations between the Egyptian armed forces and thousands of Islamist protesters in the streets of Cairo and Alexandria, the eventual winner will be the United States – specifically U.S.-made weapons systems in the hands of the country’s 440,000-strong military.

At last count, over 50 demonstrators were killed and more than 400 wounded in the military rampage Monday as the political crisis in Egypt spun out of control.

Virtually all of these weapons have been provided under non-repayable, outright U.S. military grants ever since Egypt signed the U.S.-brokered Camp David Peace Treaty with Israel back in September 1978.

As the second largest recipient of U.S. aid after Israel, Egypt receives about 1.5 billion dollars in both military and economic aid annually, of which 1.3 billion dollars is earmarked for the armed forces.

Nicole Auger, a military analyst covering the Middle East and Africa at Forecast International, a leader in defence market intelligence and industry forecasting, told IPS the United States is “the overwhelming (arms) supplier to Egypt”.

She said about 35 percent of the 1.3 billion dollars in annual U.S. Foreign Military Financing (FMF) grants is utilised each year for the purchase of new U.S. weapons systems.

Of the balance, about 30 percent is earmarked for the purchase and maintenance of U.S. equipment (including the procurement of ammunition for that equipment), with 20 percent covering the ongoing costs of programmes being implemented, and 15 percent being used to supplement and upgrade equipment currently in service.

Egypt is also eligible to receive surplus U.S. equipment under the Excess Defense Articles (EDA) programme, mostly on a cost-free basis, she pointed out.

Although for all intents and purposes, the upheaval in Egypt has been described as a military coup, the administration of President Barack Obama has shied away from that categorisation, arguing the military takeover was triggered by civilian demands.

In an op-ed published in the New York Times Monday, Khaled M. Abou El Fadl, a law professor at the University of California, wrote: “By stepping in to remove an unpopular president, the Egyptian army re-affirmed a despotic tradition in the Middle East: army officers decide what the country needs, and they always know best.”

Under current U.S. legislation, it is mandatory for the United States to cut off aid to any country where the military takes power and ousts a democratically elected government – as happened in previous years in Fiji, Cote d’Ivoire and the Central African Republic, among others.

After country-wide elections, Mohammed Morsi of the Muslim Brotherhood was sworn in as the country’s first democratically-elected president in June 2012.

But so far, the White House has refused to cut off aid to Egypt, hoping to use it as leverage to restore civilian rule.

White House spokesman Jay Carney told reporters Monday, “We are going to examine this and monitor this, and take the time necessary in making the determination in a manner that’s consistent with our policy objectives and our national security interests.

“But we do not believe that it is in our interests to make a precipitous decision or determination to change our assistance programme right away,” he said.

Still, there are several U.S. legislators, including Senators John McCain (Republican of Arizona), Patrick Leahy (Democrat of Vermont), and Carl Levin (Democrat of Michigan and chairman of the Armed Services Committee) who have called for a suspension of U.S. aid to Egypt until the restoration of democracy.

Prior to the Camp David peace treaty, Egypt was a long-time recipient of Soviet weaponry under a Treaty of Friendship and Cooperation with Moscow. The Aswan Dam, a major economic showpiece, was built with financial assistance from the then Soviet Union.

But with the Camp David accords, Egypt switched its political and military loyalties from the Soviet Union to the United States.

Still, Egypt remains in the process of steadily weaning itself off former Soviet legacy hardware; prior to 1978, the Egyptian Army was largely equipped with Soviet weaponry.