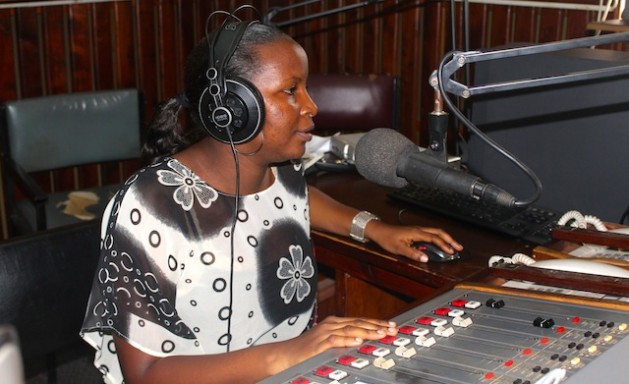 Rose, a married shop attendant who works at Kiseka market in Kampala’s suburbs, is fed up with men who flirt with “smart-looking” ladies on the street, yet ignore their own wives at home.

Her call prompts a barrage of new ones on the same issue, before Mary rings in and changes the topic completely. She has no power in her area.

Welcome to talkback radio Uganda and to 101.7 Mama FM, which founders claim is Africa’s first women’s radio station, as all its key management positions are filled by women. Mama Boda Boda, a popular show on the station, is broadcast every Monday to Thursday between 10 am and 1 pm and is hosted by Charles Kabanda, a part-time drummer.

This was after a feasibility report showed that there was room for another radio station to provide a platform for women and other groups sidelined by the mainstream media.

UMWA describes women’s voices as the “missing melody in the tune of sustainable development”. Masagazi, who is married and has two adult children, told IPS that Mama FM was given its name “because anytime your mother is talking to you, you’ll always give her an ear.”

Yet content is not limited to women’s voices and issues, although the channel targets mostly women in the 15 to 45 age bracket.

“We said it shouldn’t be biased towards women because we’ll cause issues with men and maybe men will not listen to the station because it’s owned by women,” said Masagazi.

In fact, male presenters at the station actually outnumber women 12 to nine. And when it comes to “phone-ins”, there are more male callers than female, according to Kabanda.

“Some still shy away, but it’s important (that women have a role in the Ugandan media) because we need to hear both sexes,” he told IPS.

Abu Mukiibi, 32, who works for the United Nations African Institute for the Prevention of Crime and the Treatment of Offenders (UNAFRI) and lives in Nakawa, a suburb in Kampala, told IPS that he is a huge fan of the station.

“I’ve been a fan of Mama FM for the past six years. I like Mama Boda Boda. It encourages people to work and it’s interesting.”

“Research has shown that putting a woman at the head of a newsroom does not necessarily reduce masculinist perspectives,” he told IPS.

Radio is still by far the most widely used communication medium in Africa, Asia and other parts of the developing world, according to UNESCO.

The African Media Barometer Uganda 2012 study found nearly 68 percent of Ugandans received their daily news through radio. Most Ugandans own a radio, as a cheap FM set costs about 5,000 Ugandan shillings (two dollars), the report said.

Previously, women in Uganda were rarely featured on radio programmes and when they were, they were stereotyped, according to a 2009 Makerere University report involving Mama FM and two local commercial stations, Uganda Broadcasting Corporation and Central Broadcasting Service.

Mama FM, whose slogan is “The voice to listen to”, has its studios in Kisaasi, about eight km from Kampala’s city centre. It is funded by Norway’s Forum for Women and Development (FOKUS), the Norwegian Agency for Development Cooperation (NORAD) and the International Solidarity Foundation, a Finnish NGO. Radio Orakel 99.3 FM in Oslo, Norway, which has been described as the world’s first women’s radio station, provided technical support.

Shows are transmitted in English and Kiswahili as well as nine Ugandan languages, including Luganda, for 18 hours a day and are mostly live, instead of pre-recorded.

Highlights include Okwerinda (Health Matters) on Saturday morning, which centres on reproductive health, hygiene and HIV/AIDS. The Sunday afternoon lineup includes Papa Mama Round Table, a debate between men and women on how to “improve gender relations.”

The most popular show is Omumuli, the sports programme, which serves up commentary and analysis of the English Premier League, African football, volleyball and swimming, among others.

Because Mama FM survives on funding, it is little wonder that presenters are not paid big salaries. But Laila Mutebi, 26, the voice of Evening Voyage, a drive-time show, views the experience as invaluable if she wants to work at a bigger station one day.

“It’s hard getting a job here in Uganda, especially if you’re female and in the entertainment industry,” she told IPS.

Masagazi, 54, a former journalism lecturer, acknowledged that the presenters were virtually “volunteers”, but said having women on air was important. The media in Uganda was a male-dominated profession, with sexual harassment being a common feature, she claimed.

“Many times when you’re looking for a job and it is a man in the chair they ask for sexual favours,” she said. “Some women give in.”