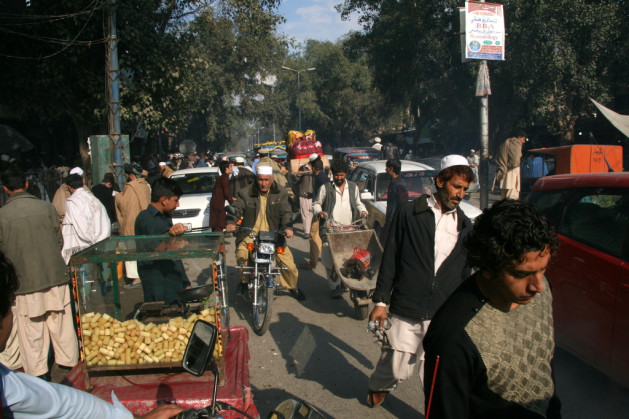 JALALABAD, Afghanistan, Dec 18 2013 (IPS) - Afghanistan’s 30 million people are deeply divided over whether President Hamid Karzai should sign the Bilateral Security Agreement (BSA) with Washington that will allow U.S. military operations to continue in the conflict-ravaged country after NATO forces leave in 2014.

Some believe the BSA is important for stability in Afghanistan, others say it could invite further trouble from insurgents. Yet others believe signing the pact would antagonise countries like Pakistan and Iran.

“We are a weak country, militarily, economically and politically. That’s why we need the agreement. We have to make a very pragmatic choice: accept the Americans here or face a very uncertain future with no country willing to help us,” Hedayatullah Amam, a businessman in his 50s, told IPS.

“Karzai is just playing a political game to present himself as a man protecting national sovereignty, but that will be over soon."

The U.S. wants to sign the pact soon as possible, but President Karzai wants to wait it out till the next presidential elections in April 2014. However, many in Afghanistan see it as mere posturing on his part.

“Karzai will sign the agreement for sure,” said Amam who was travelling in a shared taxi from capital Kabul to Jalalabad, 120 km away.

“He is just playing a political game to present himself as a man protecting national sovereignty, but that will be over soon. I predict he will approve the agreement within one month, maximum two.”

After the Taliban was dislodged from Kabul in 2001, NATO’s International Security Assistance Force (ISAF) was mandated by the U.N, Security Council to assist the Afghan government, fight insurgency and support the growth of Afghan security forces.

The BSA – endorsed by the Loya Jirga, a consultative assembly of elders and representatives from 34 provinces – provided for the possibility of U.S. troops staying on after the ISAF mission was completed by end 2014 and using at least nine military bases, including the strategic Bagram air base outside Kabul.

“The U.S. is the strongest country in the world,” said Asadullah Larawi, regional officer at the Civil Society Development Centre. “A partnership with America would prevent our neighbours from interfering. Our government has to make them understand that the bases are not a danger to them,” he told IPS.

Afghanistan’s own security forces are relatively new. Created in 2002, its army now has 200,000 personnel and its air force has around 6,800 personnel. The Afghan National Police has 50,500 personnel and the districts are manned by 24,200 local policemen.

President Karzai is facing increasing pressure after he unexpectedly decided to postpone the approval of the BSA.

On Dec. 3, at the start of a two-day NATO foreign ministerial meeting in Brussels, NATO Secretary General Anders Fogh Rasmussen made it clear that NATO commitment would disappear without the approval of the BSA.

After National Security Advisor Susan Rice visited Kabul Nov. 25, the White House too released a statement saying, “The lack of a signed BSA would jeopardise NATO and other nations’ pledges of assistance made at the Chicago and Tokyo conferences in 2012.”

Kate Clark, researcher at the Afghanistan Analysts Network of Kabul, believes the U.S. message was unequivocal.

Clark wrote: “Sign soon or risk the ‘zero option’, which, according to the statement, would include no U.S. troops, no NATO troops, no ‘enabling’ of Afghan security forces and the disappearance of billions of dollars of aid – not just the salaries of the police and army but also the civilian assistance that had been pledged at Tokyo.” In July 2012, international donors pledged in Tokyo to give Afghanistan 16 billion dollars in civilian aid over four years.

But many Afghans think the BSA will corrode Afghanistan’s already fragile sovereignty.

Naqibullah ‘Saqib’, head of the political science faculty at Nangarhar University, said, “Once the agreement is approved, countries like Iran and Pakistan can easily create bigger problems than the current ones. Russia could also do so.”

The fears are not unfounded. Iranian President Hassan Rouhani recently said his country opposes the presence of foreign forces in Afghanistan.

Baz Mohammad Abid, a well-known journalist here who works for Radio Mashaal, the local branch of Radio Free Europe, says that continuing to have U.S. bases in the country will have an adverse impact.

“Whether we like it or not, the Americans will keep some bases. Despite the reluctance of President Karzai to sign, the Afghan government has already basically agreed to it.

“But the agreement will be detrimental for us because our neighbours will be extremely vexed and will try to expel the Americans from the region by arming insurgents. I believe they should not stay,” Abid told IPS.

Some point out that the presence of international troops has not stopped neighbours from interfering in Afghanistan’s internal affairs.

Wahidullah Danish of the Civil Society Development Centre said, “Who is to say that the American military bases will deter the neighbours? There are many foreign armies in Afghanistan today, but there is still a lot of interference,” he said.

“American military bases are unacceptable to our neighbours and to insurgents who could even launch another jihad against foreigners,” he said. “Instead of hosting American bases, we should strengthen our own army with more weapons and training.”