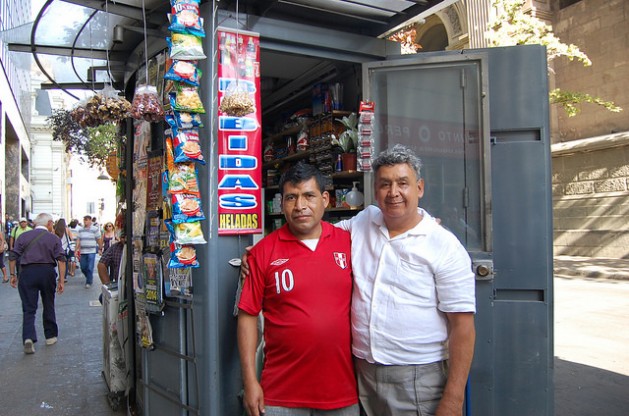 Juan González (left), a Peruvian, and Luis Monsalve, a Chilean, made friends in the Plaza de Armas in Santiago in spite of the maritime border dispute settled by the International Court of Justice in The Hague. Credit: Marianela Jarroud/IPS

SANTIAGO, Feb 3 2014 (IPS) - Juan González and Luis Monsalve come from different backgrounds, but have much in common. González, a 40-year-old Peruvian migrant who has lived for the past eight years in Santiago, and Monsalve, a 63-year-old Chilean, agree that border conflicts never benefit ordinary people.

They both awaited with interest the ruling of the International Court of Justice (ICJ) in The Hague, which on Monday Jan. 27 took a balanced view of both countries’ legal arguments, but ultimately handed over to Lima thousands of square kilometres of ocean previously controlled by Santiago.

“There were differences of opinion between the Peruvians and ourselves, but the atmosphere was never charged with hate.” -- Chilean, Luis Monsalve

In Santiago’s Plaza de Armas, where both men work, mobile television crews, journalists and photographers were present that day to observe the reactions of Chileans and Peruvians to the verdict that settled one of Latin America’s pending border disputes.

“We got a piece of sea that is more important to the high-up authorities, because we ordinary Chileans and Peruvians aren’t given a single fish,” González, a vendor of Peruvian food on one side of the Plaza, told IPS on Wednesday Jan. 29.

For Monsalve, who has a small kiosk on the square, the dispute is “a far-off issue” because “our real problems centre on how to feed our families.”

The Plaza de Armas is the geographical centre of the city and the starting point for measuring distances on all Chile’s highways. It is a favourite place for a stroll for many of the 103,624 Peruvian residents who are the main immigrant community in this country.

The ICJ set new bilateral maritime borders and granted Peru some 22,000 square kilometres of what had been a Chilean exclusive economic zone for the previous 60 years.

Chile wanted the maritime boundary to run parallel to the equator for 200 nautical miles (the limit of its territorial waters), while Peru argued the border should be perpendicular to the coast. The newly delineated border runs along the parallel for 80 nautical miles and then extends to the southwest at an equal distance from both coasts.

The ICJ’s decision is regarded as an equitable compromise by both governments.

The waters that were in dispute are fishing grounds for 1,300 artisanal fishers of anchovy, mainly used to make fish meal, but are controlled by a fishing conglomerate owned by Grupo Angelini, the third-largest economic group in the country.

“The ICJ has safeguarded the fishing rights of artisanal fishers, but also those of the large fishing industry, which operates out to about 60 nautical miles” from the coast, economist Claudio Lara told IPS.

“The interests of Chilean fishing, especially the industry, have been protected by the decision,” said Lara, who is in charge of teaching Master’s degrees in economics at the Latin American Postgraduate School at ARCIS University.

Peru declared it had won a victory in the court case that it brought before the ICJ in 2008, while Chile downplayed the loss of some territorial waters by pointing out that the court in The Hague had recognised the 80 nautical miles of existing maritime border.

While ICJ presiding judge Peter Tomka in The Hague read the verdict, which cannot be appealed, dozens of Peruvian migrants and Chilean citizens discussed its ramifications in the Plaza de Armas.

Chile fought against Bolivia and Peru in the War of the Pacific (1879-1883), in which Lima lost the provinces of Arica and Iquique, and Bolivia lost Antofagasta.

During the War of the Pacific, Chilean soldiers sacked different areas of Peru, including Lima, looting valuable works of art and books, raping women and burning homes.

However, 130 years later, Chile and Peru have a great deal in common: they are members of the Pacific Alliance together with Colombia and Mexico, and they both belong to several regional and international organisations.

Hundreds of thousands of people from both countries travel freely across the border zone from Arica in Chile to Tacna in Peru.

Chilean citizens go to clinics and hospitals in Tacna, where health care is cheaper and the staff are friendlier, they say. According to the mayor of Arica, Salvador Urrutia, some 5,000 people a day cross the border, and three times that number on weekends.

Political scientist Francisca Quiroga, a professor at the Chilean government’s Diplomatic Academy, said that beyond the positions taken by states, “today it is citizens who are on the move, creating greater social mobility, and so different points of view come into play, not just that of the nation-state.”

Nowadays, invoking an external enemy is in contradiction with the new forms of conflict resolution proposed by the citizenry, she said.

González, the Peruvian, said the court decision was a good one. “It’s for the best, this way we will not keep fighting,” he said.

“If they had given Peru more, Chileans would have been worse off, and things could have become more serious,” he said.

“Everything was calm and normal,” said Monsalve, the Chilean. “There were differences of opinion between the Peruvians and ourselves, but the atmosphere was never charged with hate.”

They agree that relations between Chileans and Peruvians are cordial. They mingle on the Plaza de Armas, where stalls selling Peruvian fruit and food have been set up.

Quiroga said that citizens have developed other ways of relating to one another, even though states in the region maintain rather rigid positions on sovereignty.

She cited as an example the Union of South American Nations, which “in its founding charter maintains a very restrictive sovereignty principle, on the basis of non intervention in the internal affairs and defence of each nation.”

Chile and Peru both took their political and legal viewpoints to the ICJ, without economic relations being affected, she said.

Lara said that Chileans have invested over eight billion dollars in Peru since the border dispute went to court in 2008.

On Wednesday Jan. 29, at a bilateral meeting held in the framework of the Second Summit of the Community of Latin American and Caribbean States in Havana, presidents Sebastián Piñera of Chile and Ollanta Humala of Peru agreed to implement the ICJ verdict gradually, in a climate of neighbourly cordiality.

In Santiago, González and Monsalve met and talked for the first time, although they work only half a block away from each other. Juan has invited Luis over to his place to eat one day soon, and says he is looking forward to welcoming him.